Social networking has its downsides, but can also be a major double-rainbow of good, at least for one stray dog (and another which was also rescued). 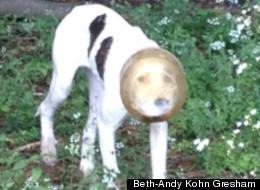 No, that's not a photoshop. The stray dog had got his head stuck in a plastic jar for unknown reasons, but we're guessing it contained something edible at the time. It was snapped by Beth-Andy Kohn Gresham who first tried to catch the stray herself but then took to Facebook on Friday after posting the photo to enlist followers to search for the dog, which had run off into the woods near her work in Memphis, Tennessee.

The call for help didn't go unnoticed, and by Saturday morning after hundreds of comments and shares, volunteers turned up to search for the stray. The dog, later named "Miracle" was found wandering near the Raleigh Jackson Avenue off Interstate-140 and was freed by using plastic cutters.

Rescuer Jess McClain told CBS affiliate WREG. "If another dog came up and attacked him he can't do a thing, or eat or drink." McClain also added they found another stray in the same area that spanned from Saturday morning to the afternoon.


Miracle now has a new home, and a happy ending. Well done people.