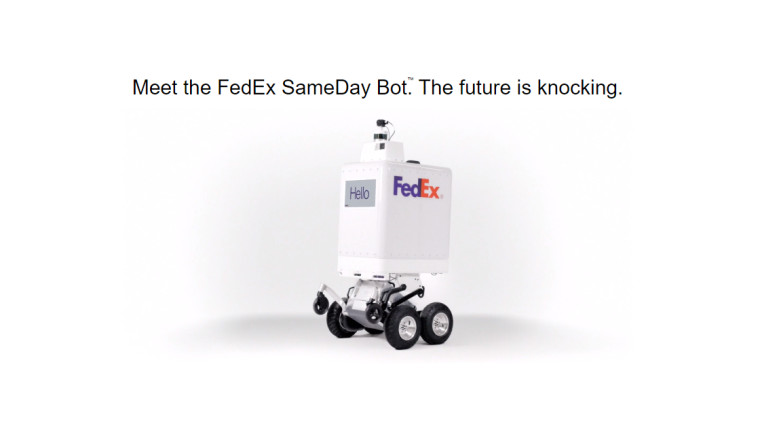 Yesterday, FedEx posted a teaser video featuring the upcoming delivery bot on its official YouTube channel along with a link to the official page for more information on the upcoming service. In the minute-long clip, the FedEx SameDay Bot can be seen maneuvering around various obstacles, including pedestrians and a dog, and crossing a road to deliver a package to the intended recipient. On the same day, the bot also starred on The Tonight Show Starring Jimmy Fallon on the NBC.

Today, the multinational courier service officially unveiled the bot in a press release, developed in partnership with AutoZone, Lowe’s, Pizza Hut, Target, Walgreens and Walmart. FedEx aims to initiate testing this summer in Memphis and few other regions. The courier company claims that the battery-powered robot uses advanced technology allowing zero-emissions. Additionally, it has a storage compartment that can transport both hot and cold items.

“The FedEx SameDay Bot is an innovation designed to change the face of local delivery and help retailers efficiently address their customers’ rising expectations. The bot represents a milestone in our ongoing mission to solve the complexities and expense of same-day, last-mile delivery for the growing e-commerce market in a manner that is safe and environmentally friendly.”

As the name suggests, the machine is intended to be used for FedEx's same-day delivery services. Powered by the same technology as the iBot, the SameDay delivery bot uses a combination of sensors, optics and machine-learning algorithms which enable it to navigate through different terrains such as pavements, roads, sidewalks, and even stairs. With a top speed of 10 mph, it operates in compliance with all the necessary road safety rules and regulations.

At first glance, the autonomous bot appears to be pretty similar in size and functionality to Amazon's delivery robot Scout. With major firms such as Apple, Ford, and Amazon jumping on the autonomous technology bandwagon, it comes as no surprise that other big corporations like FedEx, Target and Pizza Hut are eager to start using employing unmanned robots in their operations. For further information on the FedEx SameDay Bot, you can visit the company's official website.