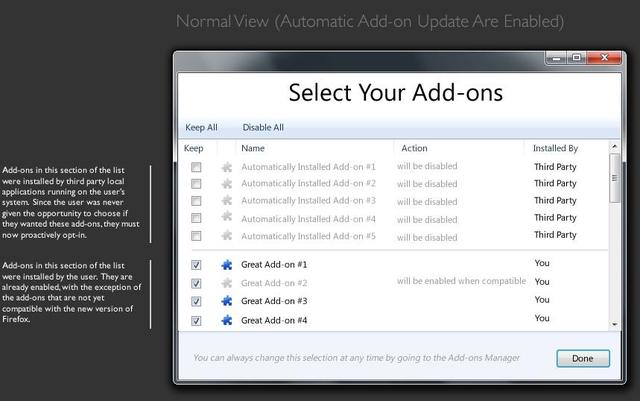 Earlier today, Neowin reported that early designs for Firefox 5, which could ship as early as mid-year, had been found on areweprettyyet.com, a site known to be used by the Firefox UI team.

Further Neowin investigations into the site have turned up a number of other concept images that suggest Mozilla may introduce automatic updating for add-ons, along with a vastly simplified process for checking the compatibility of add-ons with a new Firefox version.

The concepts, titled ''Potential Selection Screen Interface'', feature two shots of a redesigned add-on manager, with one titled ''Automatic Add-on Update Are [sic] Enabled''. The other is titled ''The User Has Disabled Automatic Add-on Updates'', clearly suggesting that Firefox 5 users will be able to enable such a feature. At the moment, Firefox will prompt the user when an add-on update is available, but will not install an update without user interaction.

A text addendum to the screen shots suggests any add-ons installed without user permission will be disabled until the user chooses to have them enabled. It is possible Mozilla will introduce such a feature to proactively prevent add-ons disturbing the user's browsing experience, as happened last month prior to Mozilla's blocking of the Skype add-on for Firefox.

The add-on compatibility wizard, largely unchanged between several versions of Firefox, may also be in for an overhaul. The concept designs suggest the number of screens shown to the user could be cut to three, with each screen redesigned with simplicity in mind.

Of course, which of these features, if any, makes Firefox 5 remains to be seen. The Firefox 2011 Roadmap, hosted on the Mozilla wiki, suggests the company is moving to match Google's frenetic Chrome release schedule, with Mozilla apparently aiming to have Firefox 4,5,6 and 7 out the door in the 2011 calendar year. That kind of schedule will likely require some serious organisational changes, given that the company has taken more than a year just to get Firefox 4 close to the release candidate stage.