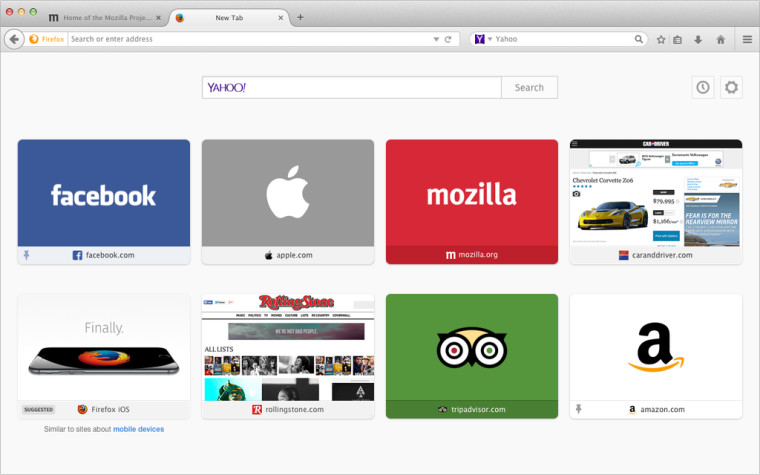 In the current world of the internet where advertising can be seen just about everywhere, Mozilla is launching a new platform for advertisers called "Suggested Tiles." The platform will be utilized in the company's popular browser, Firefox. Mozilla will analyze your browsing history and habits while using the browser, and will then suggest advertiser sites, which will appear on Firefox's "New Tab" page.

Many consumers are increasingly weary of how their data is being collected and shared in the advertising ecosystem without transparency and consent – and complex opt-outs or unreadable privacy policies exacerbate this. Many users even block advertisements altogether. This situation is bad for users, bad for advertisers and bad for the Web.

If a user does not wish to see the suggested advertising websites, the feature can be turned off via Firefox's settings. However, if the user does opt-in to the feature, an infographic linked to the blog post says that personal data will not be supplied to advertisers, but rather anonymous clustered data will be given to them. Mozilla will reportedly have the final approval over the suggested websites that will appear on the "New Tab" page.

The post also notes that the new feature does not retain nor share personal data, and that they do not make use of cookies. Mozilla reiterates that "Suggested Tiles" are controlled by the user, not directed towards a captive audience, and most importantly, it respects users' privacy.

Almost two years ago, Twitter launched a similar program, where ads relevant to a user's interests are displayed. The company will also let people opt-out of the feature, if they wished to do so.

The new feature will be launched by Mozilla as a Beta version soon, and then live over the summer.