While it was brands like Motorola, LG, and Huawei that ushered in wearables - this year has been fairly quiet - with unexpected players like Michael Kors, Fossil, Nixon - continuing the movement. As we inch towards the end of the year, Samsung's Gear S3 watches are finally making their way to retailers, albeit in very limited numbers.

The Gear S3 isn't a replacement for last year's Gear S2, but is a wearable that offers more features in a slightly larger package. Samsung is offering three different options this year: the frontier with LTE, frontier, and classic. The frontier model offers a more rugged design with its muted black finish, silicone band, and flat textured buttons. The frontier is available in two models - the standard version with Bluetooth and Wi-Fi, and an LTE variant being sold by carriers in the United States. The classic is a more stylish watch, offering a steel silver finish and leather band while lacking LTE support. Otherwise, both models are nearly identical when it comes to the display, processor, and memory.

After a week, I was finally able to track down a classic model, which seems like a rarer unit compared to its frontier counterpart. The box is rather tall as it is split into two compartments - the upper area houses the watch, while the lower portion its accessories. The watch comes with everything you would expect like a wireless charging stand, extra leather band (small), microUSB cable, AC adapter, and instructions.

So how does the watch feel? The Gear S3 feels sturdy in hand thanks to its stainless steel bezel. Unfortunately, the leather band is the watch's biggest let down, as it looks and feels extremely cheap. Thankfully, you can replace the band, as it can accept any 22mm sized replacement. The most satisfying portion of the watch is the circular display and its rotating bezel. Samsung has leveraged the bezel and used it as a point of interaction for its smartwatches - allowing users to navigate menus, scroll notifications and more.

Unfortunately, those that have smaller wrists might be put-off by the size of the Gear S3, as it is a tad big and thick. The increase in size comes from trying to pack more into a smartwatch like GPS, a large screen, and bigger battery. 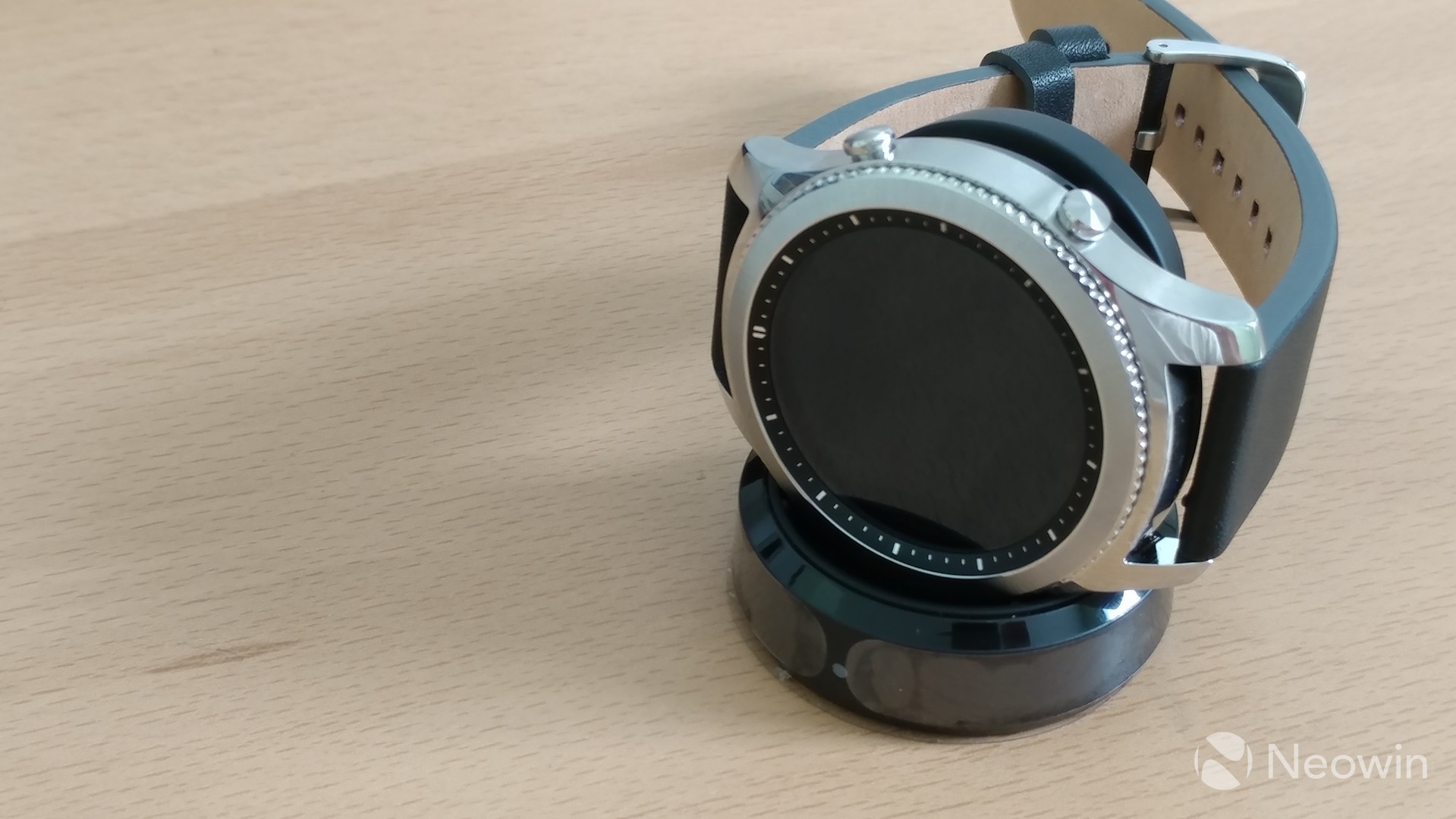 Although the Gear S3 is compatible with any Android smartphone running Android 4.4 or higher, it works best when paired with a Samsung device. While I do have the option of pairing with a Samsung, for my daily use, I will be using it with Google's Pixel XL instead. According to Samsung, if you are not using it with a Samsung handset, you will experience reduced functionality from the watch.

If you are pairing the watch with a phone that is not a Samsung, you will be required to download a few different apps that allow the watch to function properly. During the installation process, you will be given various options to optimize the experience. Like other smartwatches, you can customize the experience and look by downloading apps and watch faces.

Despite offering a "limited" experience, after a day of use, the watch seems to provide an adequate amount of data, as I was able to receive texts messages and notifications from various applications like Twitter and Hangouts. The best part of the interaction was being able to respond without reaching for my phone. The Gear S3 offers a few different options when it comes to responding - a pre-formatted response, emoji, the keyboard, or speech to text. I have only used the pre-formatted responses and speech to text, but both work great.

After about a day of use, I currently have about 54% battery life remaining with the 'Always On' display engaged. The 'Always On' display allows the watch face to stay on permanently, but in a reserved power state. Assuming that the remaining 54% will get me through another day (as it should), I'll be working with about a two-day runtime which is good, but a far cry from the four days being touted by Samsung. Naturally, turning off the 'Always On' feature will assist in getting closer to that four-day mark, but it will be important over the next couple of weeks to discover the sweet spot by balancing features and battery life.

If there is one thing that is currently missing from the Gear S3, is the ability to make payments with Samsung Pay. Samsung Pay has been exclusive to Samsung smartphones since its inception but has been a promised feature of Gear S3 that will work even without being paired to a Samsung handset. This is a huge feature when it comes to smartwatches for Android, as the current lineup of Android Wear watches do not support a payment option. Although the app is currently present on the Gear S3, launching it results in an error that states that the app could not be installed to the Pixel XL. It is currently unknown how Samsung will implement this feature, but some have suggested that the Gear app will be updated soon with a means to manage Samsung Pay settings.

Although it has been quite some time since I last strapped on a connected wearable, the Gear S3 feels like a familiar experience despite running an entirely different OS. While I won't doubt that the Gear S3 will provide a good experience for basic use, it's really about how well it can take advantage of its unique features like the integrated GPS and Samsung Pay. But for that, you'll have to wait for the full review, coming soon.