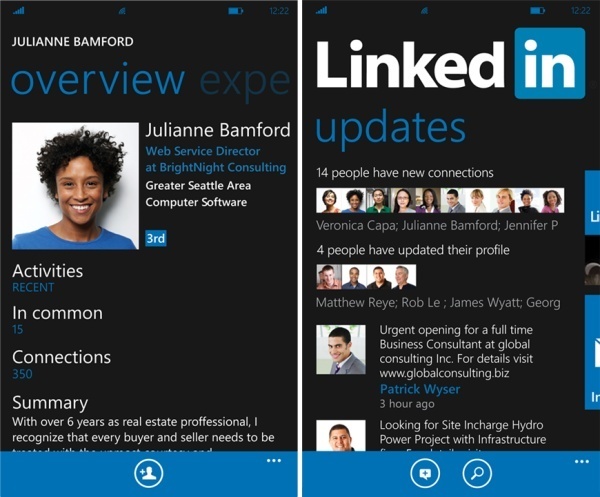 The first official app for business-related social media site LinkedIn was released earlier today. LinkedIn's app joins Facebook and Twitter as one of the most prominent social networking sites to release an app for the Windows Phone platform.

The app, as seen on the Windows Phone Marketplace, weighs in at under 1MB and requires Windows Phone 7.5 (Mango) or higher. LinkedIn's app is available for free to all Windows Phone users. The official Marketplace description of the app is as follows:

Get on-the-go access to your professional network with LinkedIn for Windows Phone. Find and connect with more than 150M members worldwide, read the latest industry news, keep up-to-date with your groups, explore jobs you might be interested in, and share content with your network from anywhere.

LinkedIn is a social media site for business networking. Users can find colleagues, friends, classmates and other contacts to network for business-related tasks, such as acquiring recommendations, finding new projects and seeking career opportunities, among other abilities. The site also offers a job-posting board. The company was recently rumored to have an interest in acquiring Monster.com, one of the leading employment sites in the world, although LinkedIn denied its interest on Friday.

Two years ago, the company began offering its stock to the general public. The stock surged, giving the company a market capitalization of $9 billion; since then, numerous web-based companies have filed for IPOs, such as Groupon and Zynga; fellow social media site Facebook is expected to launch its IPO later this month.