One thing that hasn't been improving as much as it should be is the battery life of our portable devices. Over the past several years, we have had tremendous advancement in gigahertz, megapixels, resolutions and more. But, what good is all of this advancement if our devices won't last us for more than a few hours. Naturally, there are a few exceptions that come to mind when discussing smartphones, but with more companies trending away from removable batteries, it makes even more sense now to have either increased battery performance or a better way to charge devices.

Luckily, Qualcomm introduced a better way to charge devices late last year in the form of Quick Charge 2.0. Although Qualcomm does not directly manufacturer handsets, their chipsets can be found in an impressive amount of devices. If you haven't heard of Qualcomm's Quick Charge 2.0, it is a technology that allows certain Qualcomm Snapdragon equipped devices to charge up to 75% faster than standard devices. Recently, I was sent an LG G4 that can utilize quick charging. Unfortunately, LG did not include a quick charger in the bundle. Luckily, the kind folks over at Tronsmart sent us two quick charge adapters to test, the TS-WC10 for home and the TS-CC2PC for vehicle. 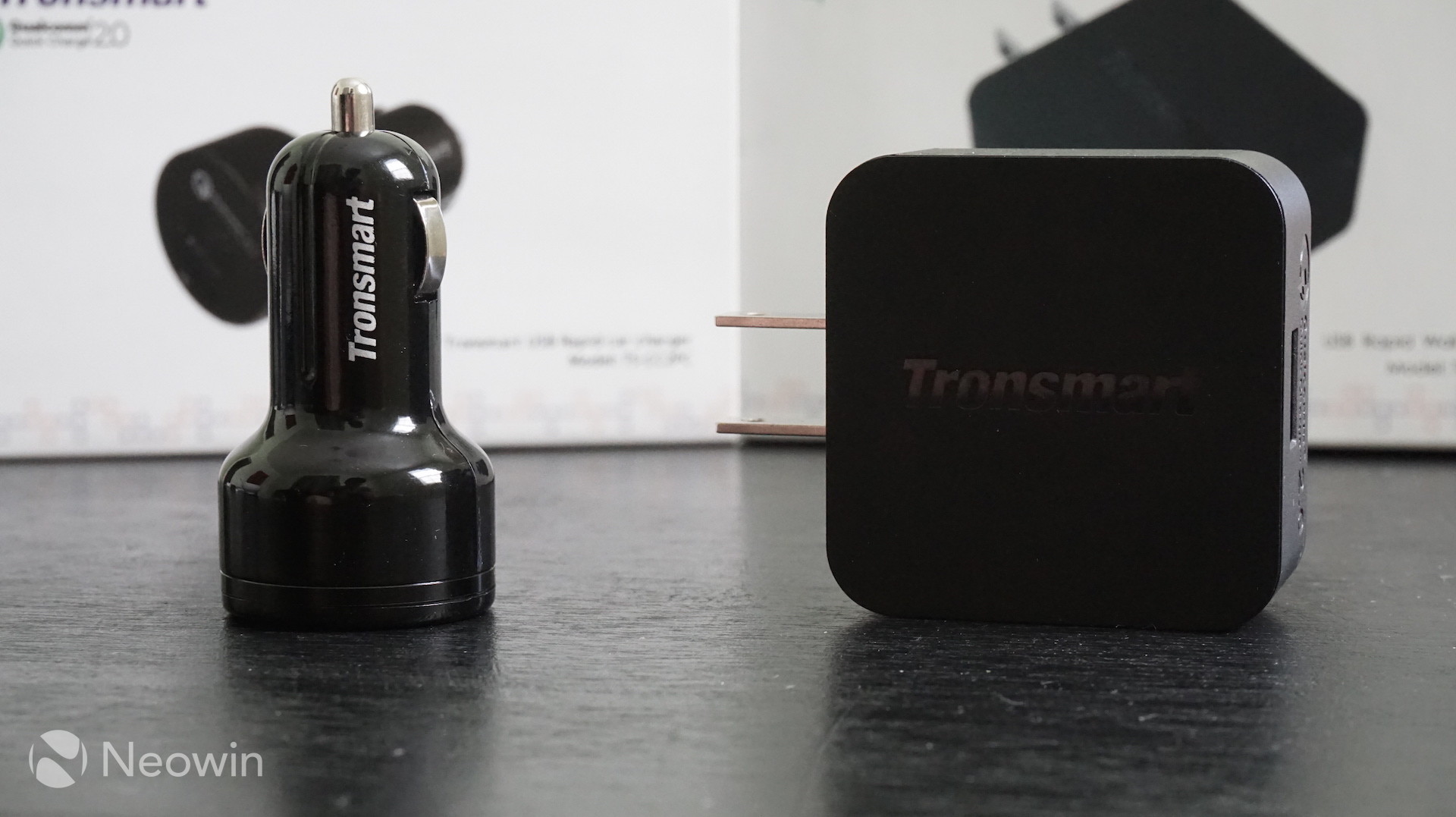 Both the TS-WC10 and TS-CC2PC are made entirely out of plastic. The TS-WC10 is your standard home charger that can be utilized in any NEMA 1 and NEMA 5 outlet commonly found in North America and parts of Asia. The TS-CC2PC is a compact car charger that fits into any car lighter socket. While both chargers aim to keep themselves discrete, the all black matte finish of the home charger is a bit more modern compared to the gloss black found on the car charger. The home charger houses a single Quick Charge 2.0 port, while the car charger offers a 2.4A and Quick Charge 2.0 port. Since these ports are USB, they provide backwards compatibility and will support devices not capable of quick charging. According to Tronsmart's website, both adapters have been certified to protect your connected devices from overcurrent, overcharging, and also short circuiting.

The Tronsmart website claims that they were able to get a 3300mAh battery to charge from 0% to 60% in 30 minutes. In order to confirm the level of charge, I completely depleted the LG G4's battery, plugged in the device and set a timer for 30 minutes. Since the battery on the LG G4 is slightly smaller at 3000mAh, I was expecting better results than what was posted on Tronsmart's website. Surprisingly, after 30 minutes, the charge indicator on the LG stated a mere 36% of charge. After one round of charging, the charger definitely wasn't working as advertised.

One thing that came to mind is that I did not use the included microUSB cable. I was pretty sure this wasn't the issue, but I decided to deplete the battery on the G4 once again in order to check this.. Just in case you were wondering, Tronsmart includes a fairly generous 6ft cable inside the box.

To maximize the charge on the second go, I also powered off the device completely to insure the best charging scenario. With another 30 minutes passed, powering up the device revealed that it had only gained 37% of charge - clearly either the LG G4 was not fully optimized for quick charging, despite being officially listed on Qualcomm's page or the charger was not working. After redoing the test with a standard 2.1A charger, I was able to get 32% of battery charge in 30 minutes.

Luckily, I was able to test the Tronsmart on a Samsung Galaxy S6. This device is also listed on the Qualcomm site and is certified as a Quick Charge 2.0 device. After depleting the battery to 0% and putting it on the charger, the Galaxy S6 was able to charge up to 51% in a mere 30 minutes.

The quick charge feature was finally working and the culprit the whole time turned out to be the LG G4. But, after a few failed attempts, I was finally able to test the speed of the quick charging adapter. While I am impressed with the charging speed of the Tronsmart charger, it did fall below the results that Tronsmart was able to accomplish in their tests. While 51% might sound pretty good, the Galaxy S6 has a much smaller battery at 2550mAh. As mentioned prior, Tronsmart was able to charge a 3300mAh device from 0% to 60% in 30 minutes. Unfortunately, I was not able to secure another device with similar battery capacity, but it's clear that 60% battery life was not possible with the S6. This is documented time and time again by Qualcomm and Tronsmart that the charging time and capacity can vary from device to device. We will keep this review updated as we get our hands on more Quick Charge 2.0 compatible devices in the future.

*On a side note, while I don't have a concrete reason why quick charging did not work on the LG G4, it was most likely do to the fact that I am using a pre-production unit with provisional hardware / software.

The Tronsmart TS-WC10 for home and the TS-CC2PC for car are both good charging solutions for your Quick Charge 2.0 capable devices. I wasn't able to attain the same charging speeds as what was advertised on Tronsmart's website, but like anything, there are always variances in what can be achieved depending on manufacturer. In the end, what is clear is that the chargers are capable of charging compatible devices much faster than a standard 2.1A or 1A charger.

Although there are only a handful of supported handsets at the moment, the benefit of quickly charging a device is evident. Sometimes, after a busy meeting, we only have 30 minutes or less charge up our devices to get ready for the next leg of the day / night. While the battery life of our portable devices hasn't improved tremendously over the past few years, it has gotten better and thanks to Qualcomm's Quick Charge 2.0 feature, we can probably deal with this deficiency a little while longer while manufacturers figure out how to produce devices with better battery life.

I'd like to extend a big 'Thank You' to the folks at Tronsmart and Geekbuying who supplied the TS-WC10 and TS-CC2PC for this review. If you are interested in purchasing either one of these chargers, you can pick it up from Tronsmart's official Amazon store or from their partner Geekbuying using the coupon "5CHARGER" -- both come with free shipping. You can check out more at Tronsmart's official product page. 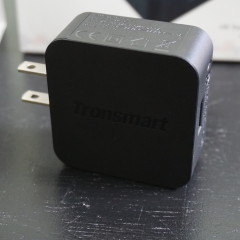 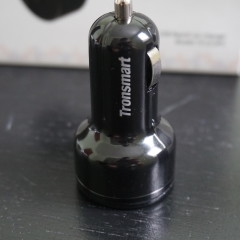 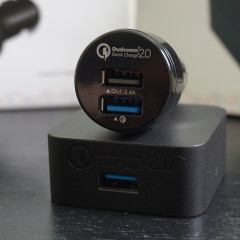 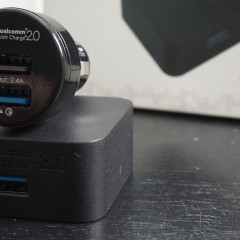 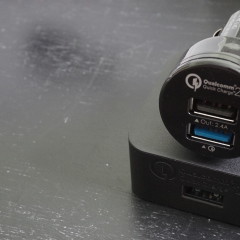 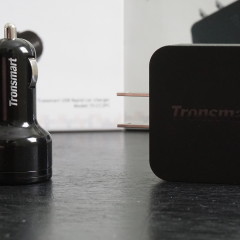