We are now less than a year from Microsoft officially ending support for Windows XP. By the time the deadline is reached on April 8th, 2014, Microsoft would have offered software security and bug fixes for Windows XP for over 12 years.  Even with that cutoff date in sight, there are a lot of people who still use Windows XP at work and even at home.

This week, Neowin member lctb51 posted up a new thread on our forums, Memorable things about Windows XP RIP, that asked Neowin members what they felt were the most memorable things about Microsoft's OS. His own post stated, "I have too many to list, but I loved everything about Windows XP from the start up sound to the new luna theme etc! I am going to greatly miss XP!"

The forum thread brought out many different opinions of the OS. One came from Mephistopheles who listed several memorable things such as, "The selection of high quality visual styles. Back in the day when I still cared for customising Windows. This very forum was sort of a central hub for the XP customisation scene." He also said he went "WTF" when he first saw Luna, "...which was on Neowin I believe."

Many Neowin readers on the message board thread stated they still use Windows XP, including firey, who stated that he had Windows ME installed on his PC but he " .... had to take it in nearly every week to get it wiped and redone. It got to the point the PC Place gave us a free OEM copy of XP and installed it and we never had to take it back."

Still use XP at my business. Got 8 computers on the network. Light weight, extremely fast, works on the older setups - networking is easy on. Could install 7 but don't see the point. Dont use any programs that use it. If anything, most of the software used to run laser and cnc machinery is more compatible with xp than win 7. Best OS ever - for the time. Much bigger leap back then than vista/7. Lets not talk about 8. 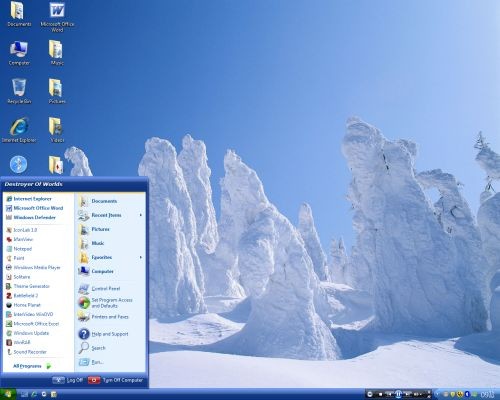 Dot Matrix even posted up a screenshot of his old Windows XP desktop in the forum thread to show off its visual style. He stated, "This was my XP desktop the morning I blew it away for the last time before installing Vista."

Not everyone writing in the message board was as nostalgic for Windows XP. Theyarecomingforyou posted his thoughts on the OS:

I remember the major security breaches, like the Blaster worm - simply connecting to the internet with an unpatched computer could bring a system to its knees. Then there was a horrible Luna theme and the animated characters, like the dog for searching. There was the new activation system which was overly sensitive, resulting in unnecessary calls to Microsoft support. And there was all the hardware that ceased to work.

The situation was much better after a couple of security packs and the explosion in the skinning community.

One thing is for sure; Windows XP will still be used by many people all over the world when its support ends in less than a year and it will be interesting to see just how many of those PC owners stick with Windows XP or finally upgrade to Windows 7 or 8.