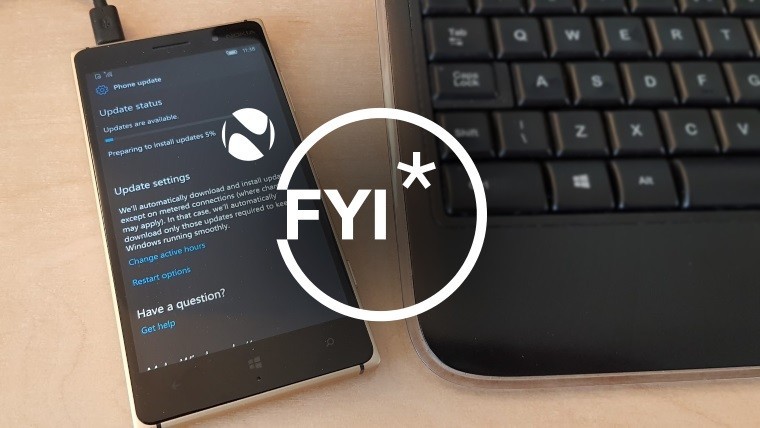 Perhaps surprisingly for some of us who are by choice or not stuck on Windows phone, updates are few and far between, but they actually still exist for Windows Phone 8.1 and Windows 10 Mobile devices. The most recent update went out a few days ago for those on version 1607 (Anniversary Update), and before that on March 19 for version 1703 (Creators Update) and on March 15, for version 1709 (Fall Creators Update).

As if three different versions of Windows 10 for phones aren't confusing enough, there is also a way to get a newer "Creators Update" (version 1703) build on some eligible Windows Phone 8.1 devices which would normally be stuck at the Anniversary Update (version 1607) level. This required users to opt into the Fast Ring, however the last Fast ring build that was pushed to those devices was 10.0.15063.138,﻿ which was released 11 months ago.

Since I still have a Lumia 830 for test purposes, and seeing that my phone didn't find anything newer than 15063.138, I was reminded by a comment from Neowin member yepp to check the Over-the-cable Updater tool for Windows Phone 8.1 and Windows Mobile 10 which was recently updated to version 8.2.0.0. However,﻿ after using it with my phone, it returned the (rather confusing) message: "Publishing error: Null hashes detected", after doing some searching I came across the reason at a forum thread on XDA Developers, opting out of Windows Insiders would restore the ability to update.

If you are facing the same issue as I was, and you are no longer being offered updates after a considerable amount of time simply follow the steps to opt out of Windows Insiders:

You can now back out of there and head to Phone update and check for updates, if that does not detect an update, plug the phone via USB into the PC, run OTCUpdater.exe and it should find the latest version for which it is eligible.

Once an update is found and the files are transferred to the phone, the update process continues as normal. The most recent I can upgrade my Lumia 830 to, is build 15063.850 which was released in January.

There are some things to take away from this experience, Microsoft really does not care about Windows phones anymore, even the Over-the-cable Updater tool won't tell you that you're in an ineligible Windows Insider ring, so hopefully this helps someone who is confused as to why they aren't getting any updates.

You can get the Over-the-cable Update tool here, be sure to share your experiences with updating your Windows phone in the comments.