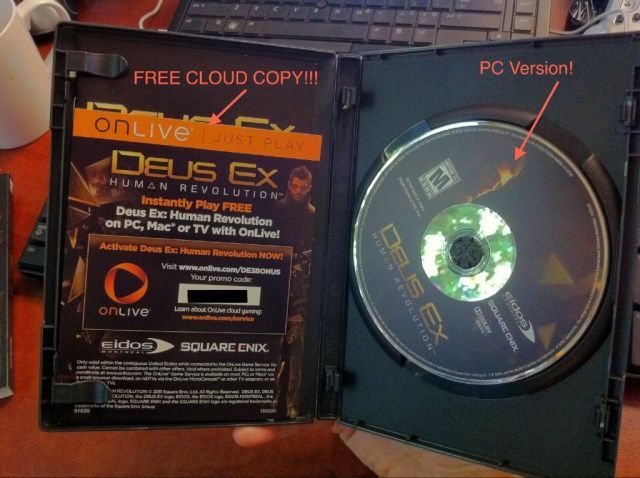 Earlier today we reported that OnLive was putting in free game codes inside boxed copies of the PC version of Deus Ex: Human Revolution. The codes give folks a way to play a free version of the cyberpunk-themed action-RPG from publisher Square Enix via OnLive's streaming PC game service. Now GameSpy is reporting that GameStop, the US's largest game retail store operating, is ordering its employees to remove the free OnLive game code cards from the PC retail boxed of the game.

The story says it has obtained a memo allegedly sent to GameStop store managers which states, "Please immediately remove and discard the OnLive coupon from all regular PC versions of Deus Ex: Human Revolution. Our desire is not to have this coupon go to any of our customers after this announcement." GameStop's PR rep Beth Sharum confirmed the move, saying, "Square Enix packed the competitor's coupon with our DXHR product without our prior knowledge and we did pull and discard these coupons." In post on its Facebook page, GameSpot added, "We don’t make a habit of promoting competitive services without a formal partnership." As far as opening a new copy of the game just to remove the OnLive coupon card, GameStop said, "While the new products may be opened, we fully guarantee the condition of the discs to be new. If you find this to not be the case, please contact the store where the game was purchased and they will further assist." So far neither OnLive nor Square Enix have commented on this move by GameStop.