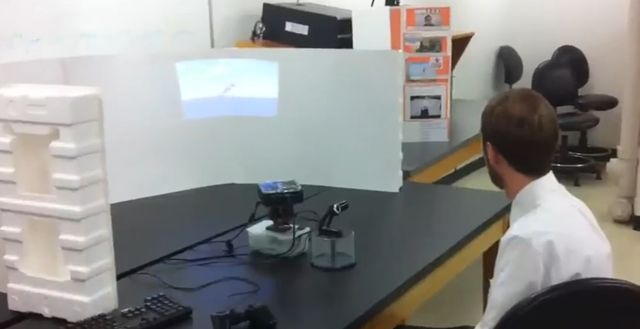 A group of students from the University of Texas at Austin have created a tech demo that could be a first step towards an all new PC gaming experience. The students combined an eye tracking camera with a pico projector and the final result was a way for a gamer to not only play but see the game world in a whole new way.

In a video posted on YouTube which you can see below, the person's head movements are being tracked by the camera which is linked to the projector. As the gamer moves his head, the projector moves with it. The image created by the projector from the PC game is placed on a curved white screen and gives a different look at the game world as if the gamer is moving his head in that world. In theory it should make the playing and controlling of games  a much more immersive experience.

University of Texas at Austin students used a flight simulator game to demonstrate their eye tracking setup. The player could use his head as a substitute for the plane's joystick and control the plane's roll and pitch maneuvers in the game world. An unnamed and unseen first person shooter was also set up with the eye tracking and projector device. As with the flight simulator, the player's head movements causes the projector to move and show a different view of the game world. This is a pretty impressive demo but sadly the University of Texas at Austin students only placed third using this demo as their entry into the school's senior design ECE competition. The group says they would love to get some more money to expand and improve the tech demo, including "more powerful motors, a dome-like projection screen, and the best possible pico projector for the best resolution."