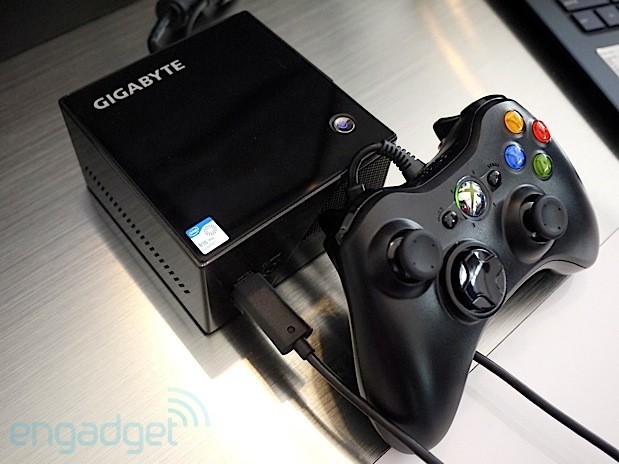 The idea of having a small PC designed to connect to a big screen television is nothing new, but lately we have seen efforts to bring a PC to a TV that can run high end games in a small form factor. Valve showed off prototypes of their "Steam Box" concept at CES 2013, and Xi3, a former partner of Valve's, is still moving ahead with its own PISTON PC product that's due to be released later this year.

This week, as part of the Intel Developer Forum, Gigabyte showed off a prototype of its upcoming BRIX Pocket Gaming PC. It's designed to be an offshoot of the company's previously launched BRIX lineup. Engadget got a chance to check out the prototype, which has Intel's Haswell processors inside along with the new Intel Iris Pro integrated graphic chip.

The story claims that the PC was able to run Codemasters' driving game GRID II smoothly on a 1080p big screen television. While the graphics capablity will likely not compare to a high end PC with a dedicated graphics card, the BRIX Pocket Gaming PC might be a good choice for a LAN gaming session, without having to drag around a huge desktop case.

Gigabyte plans to release a bare-bones version of the BRIX Pocket Gaming PC later this year for about $500. By "bare bones" that means the user will have to provide many of their their own parts, including a hard drive, operating system and memory, not to mention a game controller.