Windows devices continue to make gains in the education market. Late last year, it was reported that Windows was used on mobile devices by 66.5 percent of classrooms worldwide during the third quarter of 2017. Microsoft's operating system also managed to further its growth in the K-12 market, according to a FutureSource report released earlier this year.

Now, FutureSource Consulting has released a fresh report on mobile computing shipments in the K-12 market, indicating that Windows continues to gain traction in that market among low-cost devices. 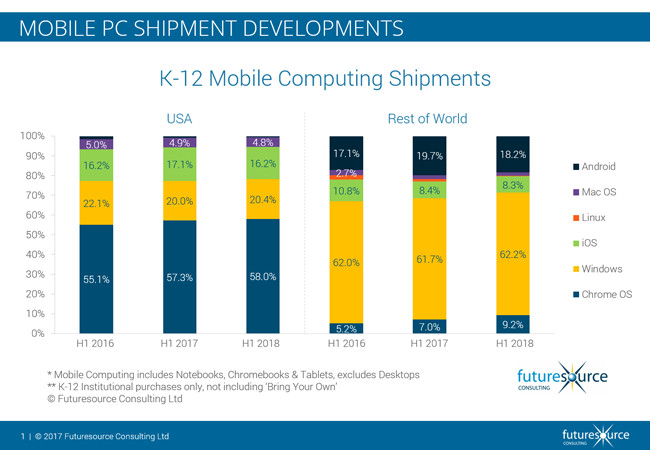 According to the latest report, the global share of Windows in the sub-$300 category grew by 11% year-on-year in the second quarter, with Windows device shipments in that category reaching 75 percent growth. FutureSource noted that Microsoft worked to promote partner devices costing as low as $189 on the Windows platform, closing the price gap between Chromebooks and Windows devices.

Meanwhile, the Chromebook platform continues to grow its market share in the U.S. and overseas. FutureSource reported that the U.S. accounts for 89 percent of Chromebook's global sales while Chromebook shipments in European schools increased more than 50 percent year-on-year during the second quarter of 2018. Chrome OS is also keeping up its progress in the Latin American market, though the Windows platform takes the lion's share in terms of sales to schools outside of North America.

Overall, both Chrome OS and Windows increased their market share by 0.7 percent and 0.4 percent, respectively, in the first half of 2018 compared to the same period in 2017, eclipsing iOS and Android. Also, the annual shipments of mobile PCs to the K-12 education market grew 4.6 percent year-on-year in the second quarter, with 6.5 million units delivered, up from 5.5 million during the same period in 2017.

As FutureSource projects the demand for computing systems in the education sector to increase throughout 2018 and into 2019, the competition between Windows and Chrome in this segment is also expected to heighten.