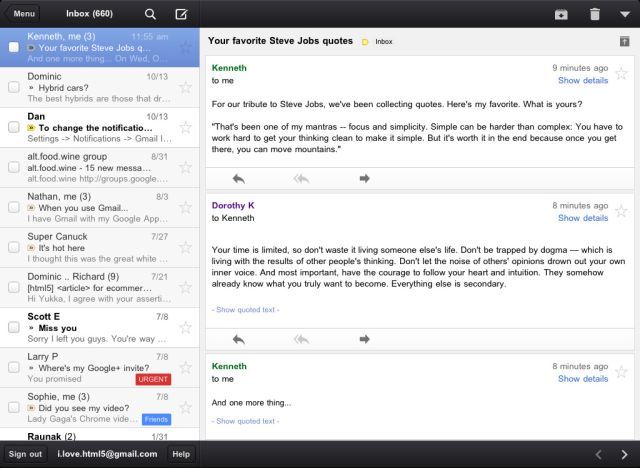 Google's new Gmail app for Apple's iOS devices was unceremoniously pulled from the App Store recently but now Google has once again offered the mobile app version of its web-based email service to all those iPhone and iPad users. The official Gmail blog has announced that the original version was pulled on November 2 due to "a bug which broke notifications and displayed an error message." The notifications are now working for the new (and free) Gmail iOS app.

First announced a couple of weeks ago, the iOS port for Gmail has a number of interesting features, including being able to use auto-complete for all of your Gmail contact email addresses, using search to find a specific email in your inbox and, as noted before, being alerted when a new email hits your inbox with sounds and other notifications. The iPad version of Gmail also has the ability to read your email as well as scan your inbox at the same time.

Even though Google has its own mobile operating system, the truth is there are likely a lot of Gmail users who will want to use the service via an iPhone and iPad. The new Gmail mobile app should allow iOS users to access all of the advanced features of Google's email service without having to surf to the Gmail web site via Safari.