God of War III left a lot of players confused as whether the player would see another God of War game release, or whether the player would see the closing of one of the most goriest trilogies of all time. Rumors have been circulating about a possible God of War IV title – which would be traditionally exclusive to Sony’s PlayStation platform. First revealed by New Zealand games retailer MightyApe in November of 2011, the rumors have persisted through this year.

Last year we saw the game listed in many resumes and in January IGN posted rumors about both God of War IV and Syphon Filter 4. And then there was this past Wednesday's more obvious tease of God of War IV, with Sony itself promising a game reveal on April 19th discussing "vengeance" and "redemption." Today we learned that God of War IV is being advertised at BT Games in Johannesburg, South Africa. The picture below was taken by an IGN reader named Tyla Daniels, and has certainly added fuel to the fire by supplying the picture below. 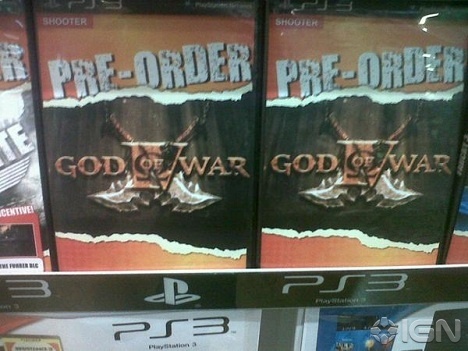 It's worth noting that the genre specification on the box states that the game is a shooter: this could be a placeholder, a mistake, or a completely new take on the franchise. However, judging from the authenticity of the images logo style and the familiar use of typography, it seems likely that God of War IV is definitely coming.