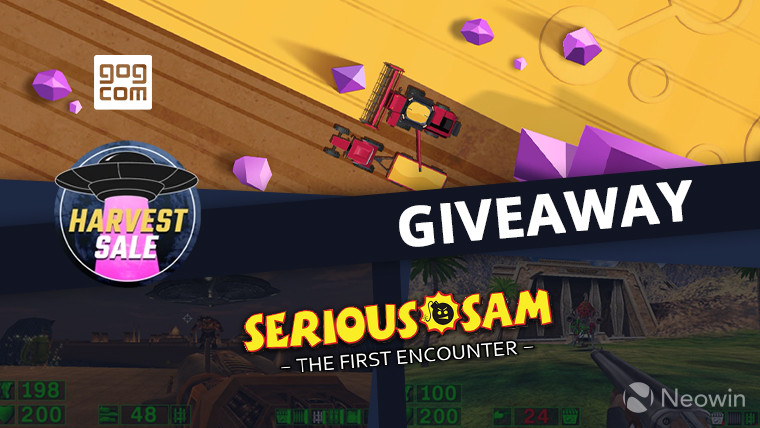 After sowing the seeds of discount earlier in the year, GOG has now returned to reap what is has sown via the Harvest Sale. As is usually the case, this one comes with a freebie in tow.

First and foremost, before checking out any of the other deals, it's worth keeping in mind that Croteam's 2001 sci-fi FPS Serious Sam: The First Encounter is yours to claim for free until August 26 at 1PM UTC (9AM ET/6AM PT in the States). Needless to say, you'll also get some extra things, which in this particular case means a copy of the soundtrack.

To claim your copy, head over to the GOG homepage, click on the "Serious Sam 1 giveaway" text, or alternatively scroll down until you see the banner pictured above. Click on the green 'Get it FREE' button, and that's it. The game is now yours.

Of course, the soon to be released Serious Sam 4 is available for pre-order on the platform, and should be available to play on September 24. The Tommy Gun classic weapon skin is a pre-order bonus.

Outside of these two titles, there's also Sid Meyer's Civilization IV: The Complete Edition to be had for 75% off, Dying Light: The Following - Enhanced Edition for 70% off the regular price, as well as Phantasmagoria for 35% off, in celebration of the title's 25th anniversary.

The offers don't stop there though, as folks who pre-order Iron Harvest by September 8 at 1PM UTC (9AM Eastern, 6AM Pacific), also get Sudden Strike 4 at no additional cost. Furthermore, there is a Quad Damage bundle available, which includes Elderborn (30% off), Hedon (30% off), Nighttime Reaper (20% off), and Project Warlock (60% off). Purchasing the entire bundle will net you another 5% discount on top, and the offer is valid until September 7, at 1PM UTC.