E-waste. It’s a significant issue that’s continuing to occupy landfills worldwide, or at the very least, closets and basements of tech savvy consumers. There is little distinction made between hardware that refuses to power on, and hardware that does work but is far outdated by the standards of today’s rapidly changing technological world. To companies and individuals that originally owned the hardware, that junk goes straight to the curb. Or a dumpster. And besides, in some jurisdictions, e-waste fees are collected upon the purchase certain hardware devices, allowing customers to drop off their electronics at some designated areas for free recycling.

Recycling is a good first step, but it’s not enough. Recycling still consumes resources, and to put that towards perfectly working, albeit outdated, hardware is a waste of time. Why not rebuild working parts into “refurbished” computers? There are bound to be at least a few families living in your community that would happily accept a computer that a majority of consumers (and perhaps the entire Neowin community) would furiously reject. And that’s where local community-based organizations step in. Enter Toronto-based PlanetGeek, as one example. I had the privilege of attending a few of their computer-building workshops last month.

PlanetGeek carries out its mission with astonishing efficiency and minimal overhead – in financial terms, anyways. All the hardware devices and computers lying around our work area were donated by individuals and companies. In particular, a good chunk of the computers used to serve the University of Toronto’s undergraduate engineering labs. Even the work area itself was donated! It was in the basement of a large and fairly old house. The Internet connection used to update the machines was shared with the residents of the house. Sharing an Internet connection was no big deal, but throwing all the machines onto the residential power supply – and lacking any UPSes - was another thing. On one occasion, we managed to trip a circuit breaker – fortunately, the affected machines were only running hardware tests and nothing else. Perhaps safety standards need to be in check.

The recycled hardware lying around the room was plenty, and most of the hardware is ancient by today's standards. Remember PCI video cards? There were plenty of them. Or how about ATI's Rage 128 cards? (Surprisingly, they're barely enough to enable Compiz in Ubuntu!) Unfortunately, no PCI-Express cards were on hand, but almost all the computers present were just under a decade old or older, so there were no motherboards to support them in any case.

The typical systems that were to be rebuilt have very modest specifications. They came with an Intel Pentium 4 processor clocked at 1.8 GHz or 2.4 GHz. The hard drives, all IDE, have capacities of 15, 20, or 40 GB. The systems usually have 512 MB of DDR-133 RAM, or varying speeds depending on what is available. The optical drives were old CD-ROM drives - remember the days of headphone jacks and volume knobs on your drive? And to top off the nostalgic hardware trip, the machines were to be equipped with floppy drives and dial-up modems. A machine I worked on was still holding onto a ZIP drive, but that drive's usefulness is next to zero given the proliferation of USB flash drives. The peripherals were all yellowed or heavily greased keyboards and mice, and LCD monitors – thankfully, there were no CRT monitors to be found. Perhaps CRT monitors were too bulky to stock for redistribution purposes.

On the software side, the machines are all loaded with Ubuntu 10.04 LTS. A few machines have the option to be loaded with Windows XP, but they come with a small cost to cover the licensing fees. For the majority of the systems, they’re deliberately skinned with a XP-like skin to allow users to fit in with the (slim) majority of today’s computer users that still use Windows XP.  Some of the trickery involved included changing Firefox’s appearance to resemble that of IE6, rearranging desktop icons, and even changing OpenOffice's icons to that used by Microsoft Office 2003. The "Start Menu" wasn’t modified, taking on an appearance similar to the Ubuntu menu in the latest 11.04 beta. At this point, I was left wondering whether it was better to go with the Windows XP lookalike Linux distro made by a Chinese developer. However, long term support with respect to security patches was crucial, and Ubuntu’s LTS releases fit the bill.

The tools used in the hardware tests we conducted on the system were mostly freely available tools on the Internet such as DBAN, Gparted, and Hiren’s Boot CD. Some of the tools were provided by the manufacturers of hardware devices – one example being Maxtor’s test suite. Ideally, in the near future they would prefer to move towards all freeware and open-source utilities instead of depending on a few proprietary tools with potentially invalid licenses.

In all honesty, none of the hardware going into the computers surprised me very much – except for the modems. You would think that in 2011, in Canada’s largest city, that all families should be able to afford even the slowest of broadband connections. Considering the machines were going to families that lived below the poverty line, and for the most part are new to technology – even the most basic Internet service is a significant investment. 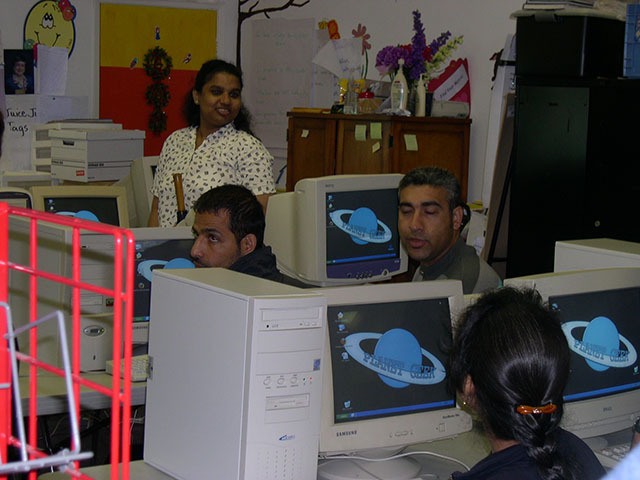 A training session at Flemington Park Food Bank. Participants are trained on the computers they get to keep after the session.

Fortunately, that’s where PlanetGeek’s secondary objective comes in – they work with local community centres to offer these computers to residents who required them, provided they’re willing to be placed on a waitlist. These residents would also receive a few hours’ worth of training to better acquaint themselves with their new computers. As an option, they’re also provided free dialup Internet access for one hour daily, or they could choose better options if they wish. As an added bonus, volunteers would also offer to deliver these machines to their homes, as these families often lacked their own vehicles to get around in. All this for free. Currently, PlanetGeek is working with the Flemington Park Food Bank in preparing enough computers for a new "train-and-grant" session.

The take-home message of an operation like this? For everyday consumers, like ourselves, we should be a little grateful for being able to access cutting-edge technology in a fast-paced technologically advanced world, even if we can’t afford everything out there. Even in a city like this, there are still residents that face similar poverty conditions as those living in third-world nations. Fortunately for them, there are individuals very close to home that are willing to help - in this case, free technology if they need it. The computers are old, and objects of ridicule given the amount of flamewars started over old technology existing in 2011 - but they're treasures for less privileged people.

So if there is a similar initiative in your community, please consider assisting them. Avoid e-waste recycling services whenever possible - these people will ensure that perfectly working technology, or at least parts of it, will not be unnecessarily recycled. There is no profit to be made here, no hidden motive - it's all a local humanitarian effort for the greater good.

Image Credit: Stock photography from sxc.hu, above photograph from PlanetGeek