Steve Jobs may have been coined with the phrase, “this changes everything” while showing off Apple’s latest devices, but with Google's announcement that they are acquiring Motorola Mobility, it really does change everything.

Few will argue that Android has been a massive success in the market. Yes, the platform has had its issues along the way (fragmentation, patents, malware), but Android has been a much needed competitor in the mobile ecosystem. That said, most of the success has come from third party manufactures like Samsung, HTC, LG, and Motorola Mobility using the Android OS on their hardware. When Google announced that they are acquiring Motorola Mobility, this entire business model gets turned upside down. This acquisition affects each component of the business model that Android has been built on, each with its own unique debit / credit to the equation.

The biggest impact will come to HTC, Samsung, and any other third party manufacturer of Android devices. When Google was using third party manufactures to support the platform, they were all on the same playing field. Each manufacture would get the updates to Android at the same time, they would all have the same support model, and most importantly, no one had insider knowledge of the development of the platform. With Google acquiring Motorola Mobility, the playing field is altered. Take a look at the acquisition from Samsung or HTC’s position. They now have to directly compete with Google on a hardware and software basis. It’s a given that Google’s own devices will receive updates faster than third party applications. Google also has the ability to optimize Android for its own devices before launch; we can already see this with the Nexus One and Nexus S. 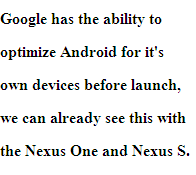 You can bet that Google will attempt to comfort HTC and Samsung over the acquisition so that they do not run to the Windows Phone platform, but in reality how can Samsung and HTC compete in a market with Google, when Google’s own devices (Motorola Mobility) will have the upper hand?

Because Motorola Mobility will be an internal operation and be able to receive support in real time, they will also be able to develop for upcoming versions of the Android platform well before external parties are informed of the updates. Sure, Google could pledge to let all parties know the same time internal organizations find out, but you can bet that over time Google will look to position its own devices as the premium Android products. When it comes to the bottom line, it’s every company for themselves.

There is also another reason why Google bought Motorola Mobility: patents. Patents are a necessary evil that have taken the spotlight recently. The big boys in the marketplace (Apple, Google, Microsoft, and many others) find it necessary to sue the pants off of each other on a weekly basis to protect intellectual property.  In the blog post announcing the acquisition, Larry Page said:

We recently explained how companies including Microsoft and Apple are banding together in anti-competitive patent attacks on Android. The U.S. Department of Justice had to intervene in the results of one recent patent auction to “protect competition and innovation in the open source software community” and it is currently looking into the results of the Nortel auction. Our acquisition of Motorola will increase competition by strengthening Google’s patent portfolio, which will enable us to better protect Android from anti-competitive threats from Microsoft, Apple and other companies.

With the acquisition, Google is getting 17000+ patents to help defend Android from Apple and Microsoft. Google did not hide this fact (as noted by the paragraph above) which makes it seem like they are more interested in Motorola’s patents than its products.

This deal has massive ramifications across the entire industry. Google now has an in-house team to build hardware (tablets, phones, and much more) to help move its own operating system and for third party developers, they now have to compete with Google on an uneven playing field. For Microsoft and Apple, they will now have to deal with Google in the courtroom who just purchased a new shield of armor to protect Android.

Google buying Motorola is a huge acquisition. A company who previously outsourced its hardware now has the ability to bring it all inside their own walls. Google said that they will keep it as a separate business unit to keep the playing field square, but for a company whose motto is “Don’t be evil”, they wouldn’t ever look to give their own products (and bottom) line an advantage in the marketplace, right?