The complexities of creating and developing a search engine that provides the most appropriate and relevant results for an enquiry are often taken for granted when we enter a couple of vague terms and expect instantaneous answers to impossibly complicated questions. Earlier this month, Microsoft gave Neowin an insight into its work in developing Bing, and its efforts into anticipating what users are searching for.

Bing recently claimed in TV ads that it "can do anything better" than Google, and in one aspect at least, that appears to be the case. Google Search has picked up an unusual habit, in equating the word "gayest" with "worst" in its search results. 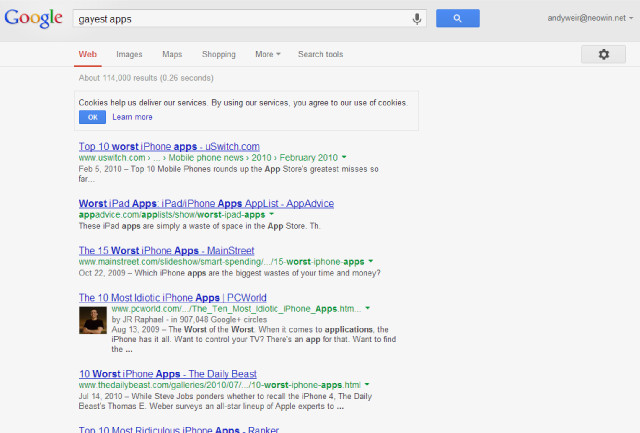 Search for "gayest apps", and the top results returned discount any interpretation of the word "gayest" in reference to homosexuality, or even happiness, assuming instead that you were searching for the worst apps out there. BuzzFeed highlighted other examples, including searches for the "gayest trends" or the "gayest Disney movies", which similarly interpreted the term in its pejorative sense.

This isn't a new phenomenon; it seems that Google's been spitting out results like this for at least the last couple of years. Google itself doesn't view this as a problem, but rather a symptom of the way that people conduct searches online. As people have increasingly used 'gay' as a disparaging term to describe something in a negative way, Google Search has reacted accordingly. In a statement to BuzzFeed, a Google spokesperson said:

Google's results, including where a search term is synonymized with another, are a reflection of content on the web and how people search. These results are determined by algorithms and we don't manually correct this process, but we are always looking at how we can improve our algorithms."

So don't expect this to change any time soon. It's also worth noting that searching for "gayest apps" on Bing includes "The 15 Worst iPhone Apps" at number 5 on its results - so while Bing isn't quite so negative when it comes to interpreting the word "gayest", it wouldn't be fair to say that it's an issue that's exclusive to Google.