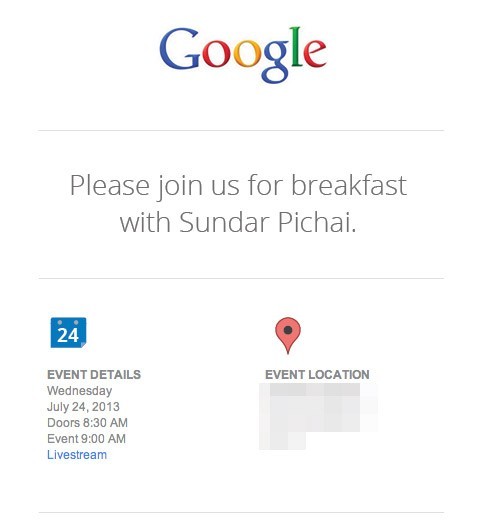 Android 4.3 is on the horizon, and now, Google have sent out invites to the press and investors for a 'breakfast' with Sundar Pichai, who oversees both Android and Chrome.

Starting at 9:00am PST, the event will be live streamed on YouTube for all to watch, as we expect a new version of Android to be officially announced and rolled out to Nexus devices. This update is seen to be one of Google's worst kept secrets, as some users have already received it on the Google Play edition versions of the Samsung Galaxy S4. The minor update, which is the third version of Android Jelly Bean, will arrive as Google readies Android 5.0 which may be released later this year. A new camera interface, support for Bluetooth LE and new advanced Wi-Fi settings are three headline features we should see at the event which Android Central revealed.

Updates to Chrome are also probable, which may bring Android features to the Chromebook, and vice versa. Pichai took up the role of head of Android this May, after previously leading only Chrome, replacing the established and experienced Andy Rubin. This will be the first update to Android under his lead.