Google have unveiled a dramatic redesign to the Google Play Store (the update is version 4.0.16). The new design includes the design language that Google is aiming for with Google Now and Android 4.2, with lots of light areas and a card-based interface. The new update is available on handsets running Android 2.2 or newer, which encompasses almost the entire Android range. Google is rolling out the update to all users today, so check your phone. 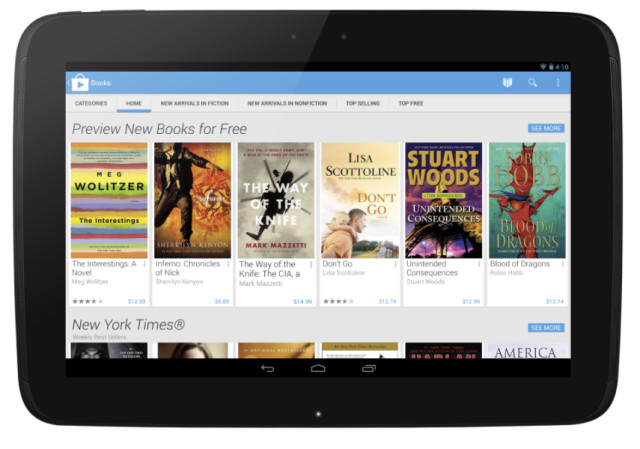 The redesign leaked a few weeks ago, and shows Google's willingness to unify all their services visually, similar to Microsoft's "Metro" design language. Previously, the Play Store had been a dark place, with lots of black and grey colour schemes. Now, the Store is light and airy and corresponds with Google Now and Google's Search app on iOS and Android.

The Store now features individual songs, apps and books in their own "cards," with a larger focus on bold, eye-catching imagery. The colour scheme has also been given a makeover; gone are the dreary greys, replaced with a new bright palette. Books, songs and apps have been moved to new sections which Michael Silinski, the product manager for Google Play, claims will ease the process of finding new content on the Play Store. The "My Apps" section has also been updated, with larger icons and more information presented. The download experience has also been simplified: when you download an app, the Store does not open up a page with a "Thanks for downloading" message, now it just remains on the app's page, similar to the App Store on iOS. Google has also been working on clearing up the Store, removing 60,000 "low quality" apps.

Update: Android Police have managed to obtain the APK, download it here.

Droid-life have managed to procure an early update and have created a hands-on video, which we have embedded below: