Google’s entire code base – from Gmail to Photos to Search – spans 2 billion lines of code across 1 billion files and consumes a total of 86 terabytes of storage. This is what Rachel Potvin, Google Engineering Manager, revealed during last week’s @Scale conference. 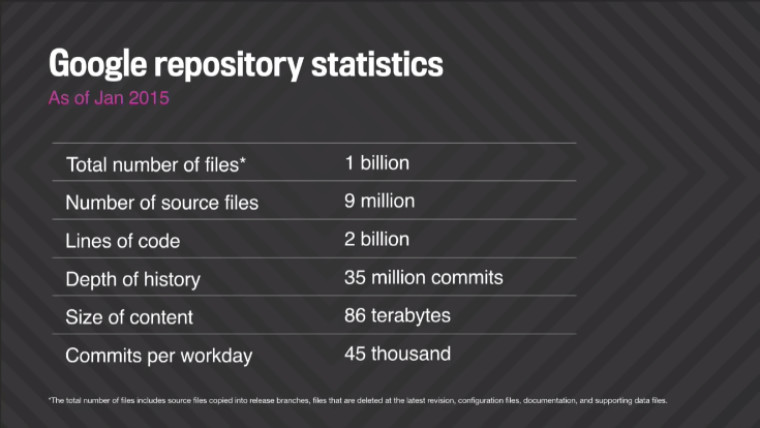 Potvin put that in to perspective against the Linux kernel, which is made up of 15 million lines of code across 40,000 files. As for Windows, Microsoft has previously revealed that Windows XP had a code base of 45 million lines of code. So, building Google is roughly equivalent to building Windows 40 times over.

This gigantic code base is made available to 95 percent of Google engineers, or about 25,000 people. With some 45,000 changes (commits) being made every day, and 15 million lines of code being modified each week. With so many engineers having access to the code base it makes starting a new project a whole lot easier, “You have a wealth of libraries already available to you. Almost everything has already been done.” Potvin told Wired. Further, when making a code change it can be deployed across all Google services simultaneously.

With Google constantly developing new products and making additions to existing ones, it's likely this code base will continue to exponentially grow in to the future.

The talk in its entirety is well worth the watch and is included below.