15 years ago today on June 22, 1996, id Software changed the entire gaming industry with the release of the full version of Quake (id released a free multiplayer preview build, known as Qtest, several months earlier). After gaining much fame for the release of the first two games in the Doom first person shooter series, there was much anticipation over the release of Quake which promised to raise the level for FPS games. However the true impact of Quake on the game industry didn't really happen until several months after the game was released thanks in part to the efforts of the game's main programmer John Carmack to improve both the look and the online play of the game.

While the released version of Quake was in many ways a rehash of id's Doom series (like Doom, Quake's "story" was minimal with a mix of sci-fi and fantasy themes), there were still a number of things about the game that stood out. The biggest was, of course, the full 3D engine which in 1996 was a huge step up from the 2D engine that id's John Carmack created for the Doom games. Quake was also something of a last hurrah for much of the team that helped to create the previous Doom games at id. After Quake was released a number of the game's designers, most notably John Romero and American McGee, left id Software to pursue their own original game creations. 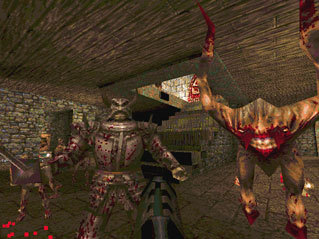 But Quake's release 15 years ago was followed up by a number of developments that would influence the making of first person shooter games in general and the game industry as a whole. One was the decision by Carmack to put in a TCP/IP networking model for the game's multiplayer modes. However, unless you had a decent Internet connection (hard to find in the dinosaur days of 1996 with 56 k modems being the norm) it was hard to get the game to play well if you wanted to play online. Carmack knew that online play was important to Quake and as a result released an updated networking model called QuakeWorld in December 1996. The improvements in the networking code included adding client-side prediction that would allow players to be able to play Quake even on less-than-optimal Internet connections. Quakeworld and its network features served as the model for future first person shooter multiplayer games.

Another later update to the game helped to usher in the era of 3D graphical acceleration in gaming PCs. In January 1997, Carmack released a patch for the game called GLQuake. The patch allowed the game to take advantage of the growing number of PC graphics cards that were made specifically to handle 3D graphics in their hardware. The result was that GLQuake not only had better frame rates than the regular version but also looked much better than the rather blocky look of the standard Quake graphics. GLQuake was a sensation in the entire game community as players bought more 3D accelerator cards (particularly the 3dfx Voodoo add-on card) and game developers started making games that also took advantage of the new graphical technology. The PC quickly became the hot gaming platform as many games eclipsed the looks of the console games of that time period, and GLQuake was a big reason that happened. 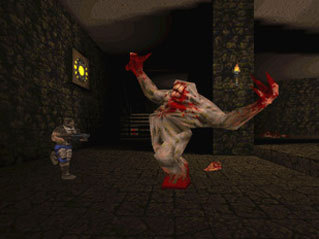 Finally there was the rise of several mods made by third parties for Quake, thanks again to Carmack as he and id released the code to create new levels and content for the game. While there were a number of notable mods made for Quake, two stand out. One was Threewave Capture the Flag, a team based mod that introduced the CTF gameplay mode to first person shooter games. The Threewave version of CTF was basically taken on by id and added as an official gameplay mode in future Quake games and Capture the Flag modes have since been a staple of most other multiplayer shooters.

The other major third party mod for the original Quake was Team Fortress, which turned the game into a class-based team multiplayer experience with much more depth than the typical deathmatch. Not only was the original Quake mod popular, but the team that created it was later recruited by a little known game developer called Valve Software. In 1999, after the release of the original Half-Life, Valve released Team Fortress Classic,which was basically a remake of the original Quake mod as a mod for Half-Life. It took a long time (and with at least one false start) but Valve finally released the game's true sequel, Team Fortress 2, in 2007, which Valve has continued to update with new features and content for free ever since.

While the original Quake got two official expansion packs made by third party developers (there were many more unofficial retail expansions), in 1997 the developer decided to take different directions for the later games in the Quake series. All of them had more of a straightforward sci-fi setting with Quake 2, Quake 4 and Enemy Territory: Quake Wars centering on the Earth fighting off an alien invasion by the cyborg-like Strogg. Quake III Arena concentrated solely on the multiplayer experience with no real story at all. id later remade Quake III Arena to launch its current free-to-play shooter Quake Live.

However it appears as if id Software is at least thinking about making a new game in the series that, if it is actually made, might go back to the art design of the first game in the series. In a recent chat on Eurogamer, Carmack stated, "We are at least tossing around the possibilities of going back to the bizarre, mixed up Cthulhu-ish Quake 1 world and rebooting that direction." In the meantime the original Quake that was released in its full form 15 years ago today is still played online and mod makers are still coming up with new projects that extend the original game. It remains one of the game industry's biggest franchises and continues to be a huge influence on game designers and creators as well as its many fans.