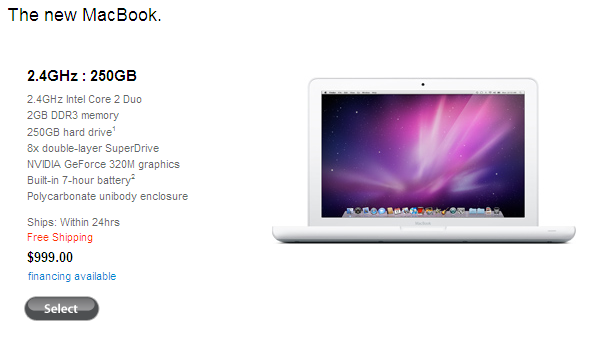 Apple has never been one to throw the latest brand of CPU into its Macbook line; the Macbook has always been the 'value' edition of the Macbook Pro (MBP). But over the last several renditions of the Macbook, it had grown closer to the MBP in specs, making the two products far less distinguishable.

But what is Apple actually planning to do with the Macbook line, solely focusing on the Macbook (and not the MBP or MBA), Apple has not updated this product since May 18 2010, over 10 months ago. Apple still refers to this product as "the new Macbook", despite the fact that it has an outdated 2.4GHz Intel Core 2 Duo, only two gigs of RAM and sells for $999.00

But if you're thinking that the MacBook is the value product ($200 less than a MBP), then why is the MacBook Air priced the same as the standard MacBook? The recently announced MacBook Air (MBA) 11in sells for $999 as well but has a higher resolution screen and a 64GB SSD. While the CPU is clocked a bit slower, the addition of an SSD should keep the performance on par with that of the standard MacBook.

So Apple, what exactly is your plan for the MacBook? There had been rumors that the line would cease to exist but it still is for sale on Apple's website. Until Apple either updates the aging platform or places in into a coffin, they will continue to sell "the new MacBook" with hardware that is anything but.