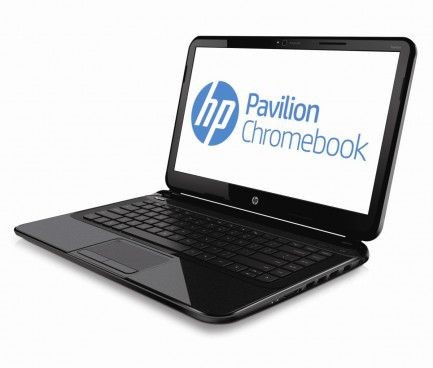 Google's Chrome OS has gained yet another OEM. Following the lead of Samsung, Acer and most recently Lenovo, HP has now been revealed to be planning the launch of the Pavilion Chromebook 14-c010us PC.

The information comes from a PDF file on HP's website that was discovered earlier today. The Chromebook will have a 14 inch screen, along with an Intel 1.1 GHz Celeron processor, 2 GB of RAM, a 16 GB SSD and a weight of 3.96 pounds. The battery life for this model is rather modest; the PDF indicates a maximum life of just 4:15 hours.

The PDF gives no indication of a launch date for the HP Chromebook, nor is there a price point. This weekend, Acer President JT Wong indicated that its $199 Chromebook has been a success for the company since it launched in November and that its Chromebooks now account for up to 10 percent of its notebook sales in the US.

With HP now becoming the fourth major PC OEM confirmed to be launching a Chromebook, one must wonder if PC makers are concerned about the launch reception of Windows 8; they may also not be happy with Microsoft that it decided to launch its own PC hardware with the Surface tablet.

Source: HP PDF | Image via HP
Via: The Verge