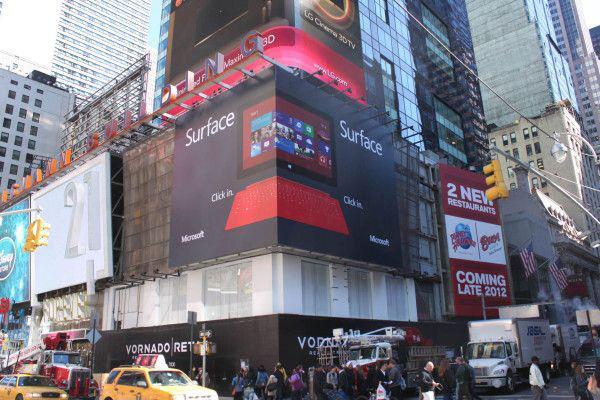 It's one of the most well known destinations in the world: Times Square in New York City. It's a place where tens of thousands of people show up every day from all over the planet and as a result companies spend a lot of money to put up massive ad banners for TV shows, movies and other products in that location.

Microsoft knows this and that's likely why they decided to put up what is certainly the biggest outdoor ad yet for its upcoming Surface tablet. Twitter user June Blender, who works as a programmer for Microsoft on PowerShell, posted up an image of the banner on her account today.

Microsoft has already been quite busy with its viral-like street art and outdoor banner campaign for the Surface, but with two weeks to go before the official launch of the Windows RT-based tablet, Microsoft has still yet to give any information about the price of the product. There's also no word on if there might be any pre-orders for the tablet.

We do know that Microsoft will launch over 30 temporary stores in the US and Canada to help sell the service. Non coincidentally, one of those stores will be put in place in Times Square.