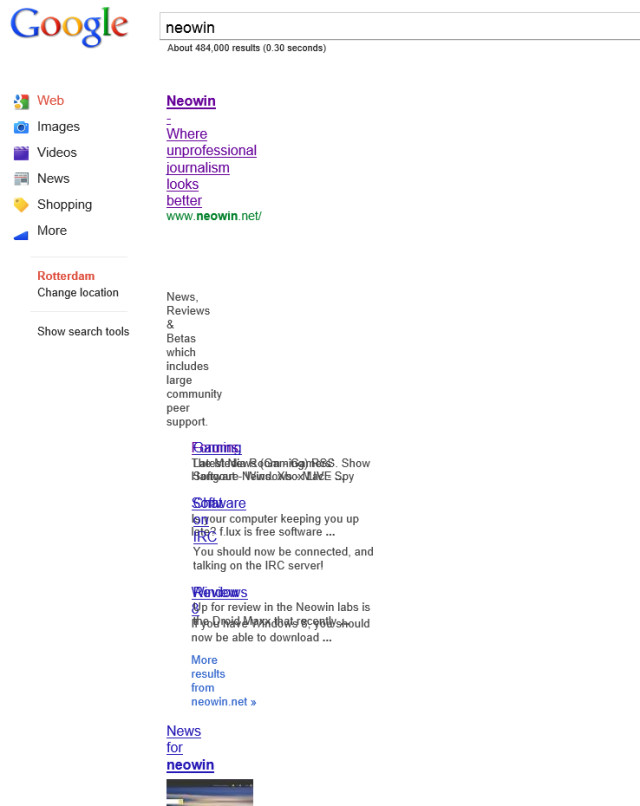 Microsoft released IE11 alongside Windows 8.1 but it appears that Microsoft may have goofed by forcing Google.com into compatibility mode which can cause rendering issues with search results. The issues have been reproduced by several users, ourselves included, and as you can see in the image above, the results are heavily skewed.

It's an odd issue but there appears to be a simple fix. The folks over at Winbeta noted that if you hit alt+x (while in IE) and uncheck 'Use Microsoft compatibility lists', the rendering issue will be fixed. What's odd here is that many might assume that Google is intentionally screwing with IE results as Google and Microsoft tend to throw mud at each other quite often. But, in fact, this is Microsoft's own fault and fortunately, there is a simple work-around.

Google Search's result list is all screwed up for me in IE11 today.

This issue comes at a time when millions are likely upgrading to Windows 8.1 (read our review here) and with IE11 bundled with the OS, the skewed results could offer a negative first impression for some users. What’s odd is that these issues never showed up in the Preview versions of Windows 8.1 but there is clearly something amiss with the release version of IE11.

A quick search on Twitter shows that many users are currently experiencing the issue with the browser too, so this is certainly not an isolated issue. Hopefully Microsoft will push out a fix soon before more users encounter the issue to avoid widespread negative connotation against IE11 and Windows 8.1.

[Update] Microsoft has provided Neowin with the following comment about the issue:

"It appears Google made some changes to its search engine that temporarily impacted the way search results rendered for some browsers. We have already made the necessary adjustments to ensure customers using Internet Explorer are not impacted."

Thanks to Steven Bink for the tip!