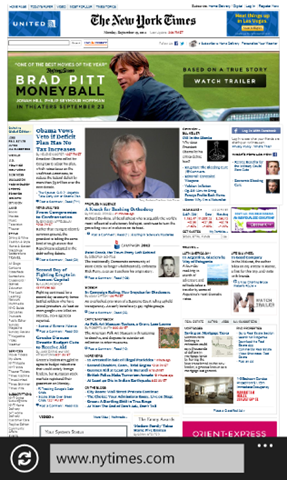 As owners of smartphones with Windows Phone 7 installed await the long awaited "Mango" update, Microsoft continues to offer info about what users can expect in terms of new features. In a recent update on the official Windows Phone 7 blog site, Microsoft's Amin Lakhani reveals more about how the Mango update will improve Windows Phone 7's version of the Internet Explorer 9 web browser.

One major change is that Windows Phone 7's version of IE9 can actually use all of the hardware of a user's smartphone. Lakhani states, " ... it can now tap into your phone’s built-in graphics processor to make web-based video and animation run faster and smoother." It also allows for full HTML5 support which means that if you surf to YouTube's web site it will show and play videos with no need to access an extra application.

Using anonymous usage data information sent by some Windows Phone 7 users, Microsoft discovered that the address bar was the most frequently used feature in the earlier version of the web browser. At the same time the favorites and tabs buttons on the bottom of the earlier web browser were used far less. Lakhani says, "Since our primary goal in Mango was to put the focus on websites, we decided to move the address bar down into the app bar, and turn the favorites and tabs buttons into menu options." The new IE9 version also puts the browser's refresh button next to the address bar for easier access by user.

The Windows Phone 7 Mango update, complete with IE9, is due out sometime in the coming weeks, with US phone carrier AT&T distributing the update to select handsets on September 27.