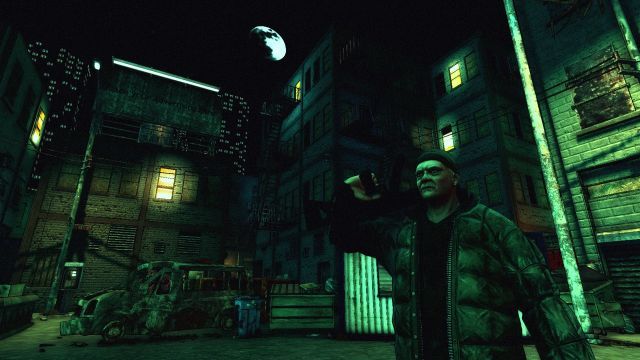 The stealth action game genre is a tough one to pull off successfully. We have seen games such as the Thief series and more recently the Assassin's Creed franchise that have put in new elements to stealth gaming. Developer RealmForge and publisher Kalypso Media will be adding a new game to this sub-genre in 2013 with DARK. This game will put players in control of a vampire in a futuristic setting. We got a chance to ask Christian Wolfertstetter, the Creative Director at Realmforge, some questions about DARK, which will be released for the PC in addition to the Xbox 360 console.

First, how did the concept for DARK come about?

After Dungeons (our last game) we wanted to do something different and also get involved in console gaming. It seemed like a good idea to make a stealth game as our first Xbox 360 project back then. Also we're huge fans of (non-sparkling) vampires in general, and Vampire (the RPG) in particular. These creatures of the night seemed to be the ideal characters for a stealth game.

What can you tell us about the fictional back story of the game?

The main character is Eric Bane, a newborn vampire with few memories of his past. He soon learns that although vampires live among humans, their existence is unknown to mortals - or at least to most of them. I can't tell you much more at the moment since we don't want to spoil too much of the game's story.

What sort of vampire abilities will the main character have?

Each vampire has very different abilities. The player’s character has an affinity to darkness so his abilities have mostly something to do with darkness or shadows. His most useful ability is called Shadowleap. The player dissipates into shadows and reappears in another position he selected. It's something like a teleport. You can also use this to kill an enemy at distance, which is very useful since Eric doesn't use any ranged weapons. You can also use your abilities to cloud the mind of an enemy, making him unaware of your presence or turn into darkness for some time in order to hide from your enemies.

There are more abilities, these were just some examples. We don’t want to give everything away just yet!

What sort of enemies will be seen in the game?

Many enemies the player will face are mere mortals but some have more futuristic weapons and armor to deal with vampires. Of course some of your enemies are also undead creatures.

What kinds of gameplay features do you consider to be important in the game?

DARK is a stealth game. The player has to rely on cover and his vampiric abilities in order to continue unseen through the game. A direct confrontation is often too deadly for the player so he has to stay hidden and hunt his unaware prey through the shadows.

What can you tell us about the art style and graphics in the game?

As you have seen in the released screenshots and video material we're using a cel-shading art style that can be colorful at some times but still remains dark and gritty.

What is the current status of the game's development and when will it be released?

DARK will be released in Q1 2013. We're still experimenting with several things like new abilities but I'd say that there shouldn’t be any problems to hold the release date.