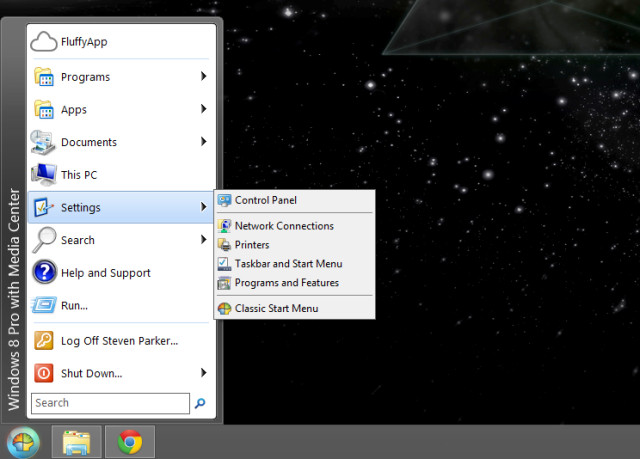 One of the many available Start menu skins.

Earlier this month, we reported that Classic Shell, the free Start Menu add-on for both Windows 7 and 8 has seen a massive surge of downloads since the launch of Windows 8 in October. Originally released in 2009, the program has now been downloaded over 6.3 million times since then, and 4.5 million of those downloads have come after the commercial release of Windows 8.

We got Classic Shell's main developer Ivo Beltchev to answer a few of our questions about Classic Shell and his reaction to its massive popularity in the last several months.

How did the idea for Classic Shell come about?

The idea for Classic Shell was born when I had to switch from Vista to Windows 7 and I discovered that the classic menu was removed. The 2 main features of the classic menu were gone – the easy keyboard navigation and the discoverability of a cascading menu.

There were a few third-party replacements, but at the time they weren’t very good. So I decided to roll up my sleeves and take a stab at it. How hard can it be? Well, 3 years later I’m still working on it :) It grew from a simple tool for personal use to a pretty popular piece of software with a life of its own. Dozens of people are contributing to the project with ideas, testing, localization, creating new skins and helping in the forums. My buddy Gaurav Kale has been very helpful with testing and proposing new features.

How hard was it to convert Classic Shell to Windows 8?

The main challenge of course was that I needed to implement a new start button. There are a lot of details to get right – the look and feel, the mouse behavior, compatibility with the different taskbar settings. The rest was fairly easy. For the most part Windows 8 is still quite compatible with Windows 7 and most of the Classic Shell code worked with no modification. An unfortunate exception is the File Explorer. Because of the extensive changes done to it, not all Classic Shell features could be ported to Windows 8.

Were you surprised that the app got so many more downloads after Windows 8 was released?

Yes, the number of downloads exploded 5 times after the release of Windows 8. It was quite unexpected.

Do you know about how many Classic Shell downloads were for Windows 8 PCs?

It is hard to tell. Currently the software has been downloaded more than 6 million times, and most likely at least 80% are for Windows 8. Of course one person may download multiple versions, and one download may be used by multiple people. So it is impossible to tell the number of unique users.

Finally what future plans do you have for Classic Shell?

At this time I don’t want to announce any upcoming new features. There are big things in the works, and the plan is to release a public beta in the following couple of months.

We would like to thank Ivo for answering our questions.