Yesterday Neowin had the chance to chat to IdentityMine which has developed several upcoming apps for Windows Phone 7 such as Twitter, Graphic.ly and IMDb. This interview is specifically about the IMDb and SBB Mobile apps. The company has also developed a train station ticketing and information app.

IdentityMine has a long history of developing applications for Microsoft products and technologies and have had offerings for most Microsoft platform launches. It doesn’t develop exclusively for Microsoft products though and has developed apps for both Android and the iPhone in the past. The company is based around the world with offices in Seattle, Los Angeles, Switzerland and India.

IdentityMine spoke briefly about the competition that Windows Phone 7 will face in the mobile market and said how the platforms doing well at the minute did so by initialling combining great hardware with a new and more consumer focused user experience. Following these two foundations, it allowed Apple, at first and quickly followed by others, to create an App Store to really expose the functionality of the hardware and operating system.

The company then went on to talk about how it feels Microsoft will be able to differentiate its self from the competition stating how currently on iPhone and Android users go into one app, find the information they want, leave the app then go into another and repeat. This is inefficient for some types of information and applications. IdentityMine feel that the user experience of Windows Phone 7 is very unique and actually offers a more useful and efficient way to navigate through the device and assimilate important information quicker than the competition through the use of hubs and Live Tiles.

That isn’t to say the company think that Windows Phone 7 doesn’t need apps just that developers need to be aware of the best ways to present information and how Windows Phone 7 will allow information to be surfaced easily and quickly to allow users to “glance and go”. Using this as a starting point the company didn’t want to view developing apps for Windows Phone 7 as a “land grab” but wanted to approach it by giving users the best user experience possible for each app they created. This meant that the company spent a lot of time building a framework early on in the development process of their first app allowing them to subsequently build apps much quicker.

The IMDb app was one of the first app the company created in parallel for the Windows Phone 7 launch; alongside which they also created the framework. The app took a total of three months to create because they were also building the framework. The company believes that the app follows the Metro guidelines closely creating an experience on Windows Phone 7 that surpasses the experience found on the iPhone and Android IMDb app. The app has been built with a great focus on imagery, used to compliment the text within the app, and presented using the Metro guidelines. This combination of text, imagery and Metro has “produced an application that is visually lush and takes advantage of the Metro style, which doesn’t happen in the other hardware versions of the app”. 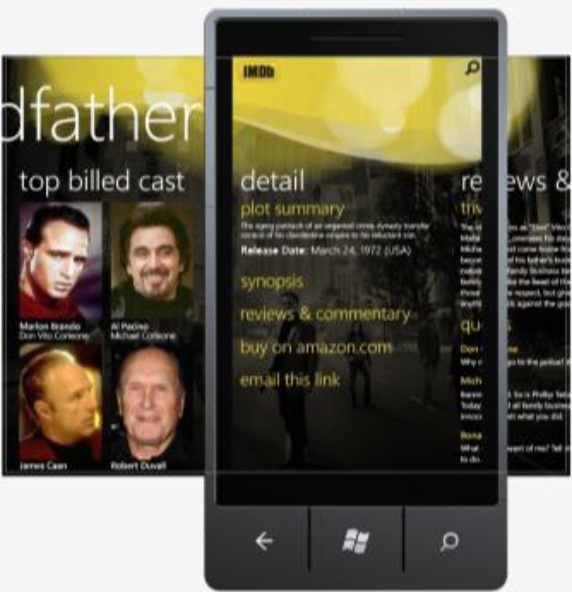 This app has been designed to be very responsive; some lists contain 1000s of entries which is said to have no noticeable impact on the performance of the app. The app is functional within 5 seconds which was one of the key specifications at the start of the project.

Another app that the company has created is SBB Mobile, an application for Swiss train travellers allowing them to “view train schedules, purchase and use paperless tickets, and plan trips”. IdentityMine based this app on the in-house SBB application for the iPhone but redesigned it so that it conforms to the Metro guidelines. It is thought that this app was built within weeks and was built using the aforementioned framework for Windows Phone 7 apps which the company developed. This app makes good use of the hardware found in all Windows Phone 7 devices allowing users to shake the device to show the latest ticket to the inspector and even supports both landscape and portrait modes.

IdentitiyMine said that they will have five apps in the Marketplace when it launches next week with some more apps to follow shortly after. The company also has plans to add additional features to some of its app over time. Neowin hopes to discuss more of the company’s apps, such as Twitter, next week.

Neowin had a very brief hands-on experience of the IMDb Windows Phone 7 app at the launch of the devices in London on Monday but have not thoroughly looked at the app.

Neowin understands that Microsoft has some major announcements to make about apps on Windows Phone 7 before the devices launch in some countries on Thursday October 21st.