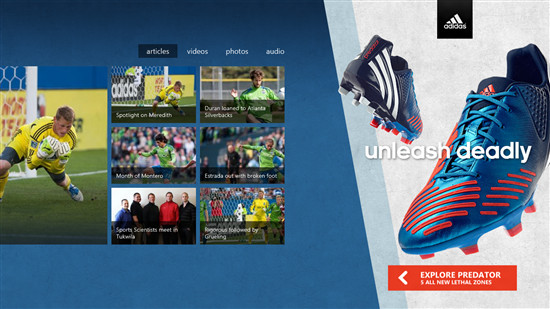 Microsoft has promoted its in-app advertising program to Windows 8 app developers for a while now as a way for those software creators to gain revenues without having to charge for their apps. Now it appears that those developers that depended on that in-app ad money have been seeing their revenues drop to almost zero in the past few weeks.

Comments from from those developers on the Bing Ads message board indicate that for the month of April they have seen little to no banner ads inside their apps. One of the most outspoken developers on this issue is Erkan Deveci, who releases apps under his company Deveci Games. In a article on ITWorld.com he stated that for the first 24 days in April, "We've had 60 million requests with only 160K filled."

In a statement, a spokesperson for Microsoft said that there are always "peaks and valleys" in the online ad business, and April happened to be a valley period as older campaigns ended and new ad campaigns start up. The representative added that Microsoft is "constantly making improvements for developers using our Advertising Platform" to make sure that there are fewer valleys to deal with.

Hopefully Microsoft's ad sellers can show evidence to companies there will be an audience for their ad banners inside Windows 8 apps that support those features. We have already seen an upsurge in new apps posted in the store in the last month, bringing the total number to over 65,000 apps.