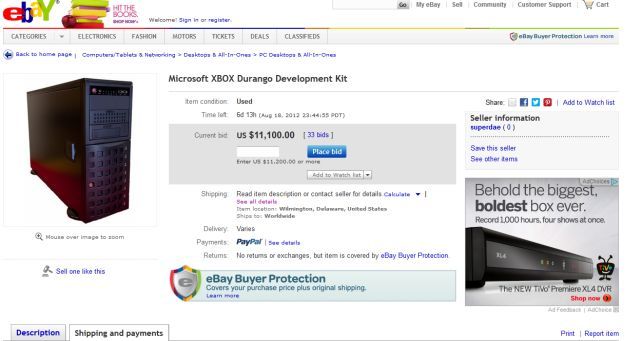 In July, a person who claimed to have a hardware SDK for Microsoft's next version of its Xbox game console posted up pictures of that product and also tried to sell the SDK (he later claimed that selling off the SDK was a prank for the administrator of the forum where he posted the images of the SDK).

Now someone else has posted up what he claims is an image of the next Xbox's SDK (with the code name Durango) and is selling that product on eBay. The person is going by the handle "superdae" on his eBay page, which matches the name of a person who earlier this week posted an image of what he claims is what the next version of Kinect looks like running on the Durango SDK.

So is this the real deal, and if so why would a person openly try to sell a hardware SDK for a game console that technically doesn't officially exist, at least according to Microsoft? It's possible that all of this activity is just one big fake out by "superdae" to get attention. However, it's certainly a very public stunt and will almost certainly come under the scrutiny of Microsoft.

Update: Would you believe it? The auction sold! Unfortunately, we can't see the lucky bidders name, but the device sold for US $20,100. Maybe we'll hear more soon, or maybe someone at Sony picked it up.