Asymco has worked out that Apple is making more from their iTunes and accessory devisions than major phone manufacturers are making overall. In a blog post, Asymco speculated that Apple made around $5.5 billion from their iTunes and accessory ranges, while other manufactures — including RIM (now BlackBerry), Sony, LG, Motorola (now owned by Google), Nokia and HTC — make significantly less.

In the chart below, you can see the difference in revenues; 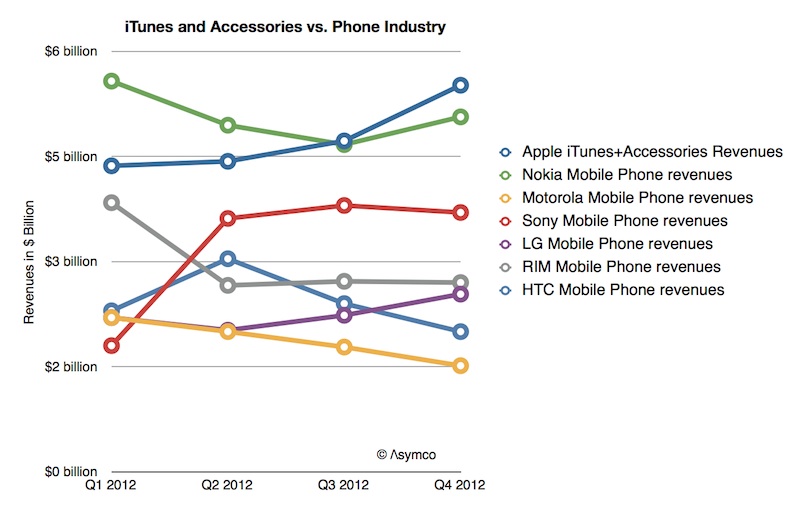 Ex-analyst, Horace Dediu, went on to say that by the end of 2013, iTunes + Accessories will out perform the Mac division:

iTunes+Accessories combined is a bigger business in terms of revenues than any of the other phone vendors except Samsung. iTunes is now Apple’s fourth largest business, having overtaken the iPod in revenues two years ago. iTunes growth relative to the Mac means that it could become the third largest business during this year.

Dediu also notes that iTunes and Accessories is now worth more than both the Xbox and Windows Phone divisions at Microsoft.

In other Apple financial news, as we previously reported, Morgan Stanley analyst Scott Devitt predicts that Apple is receiving around $1 billion per year from Google for making them the default search engine in iOS and OS X; The deal is up from $100 million thee years ago.