Kickstarter is a site that gives people with product ideas a place to pitch their offerings to people who want to donate to their cause. While donators aren’t investing in the idea, they are given rewards for their generosity. Over the past several months, we’ve highlighted various projects and today we’re going to focus on a project called the LilyPad, a case for your iPad that harnesses the power of light to keep the device charged. 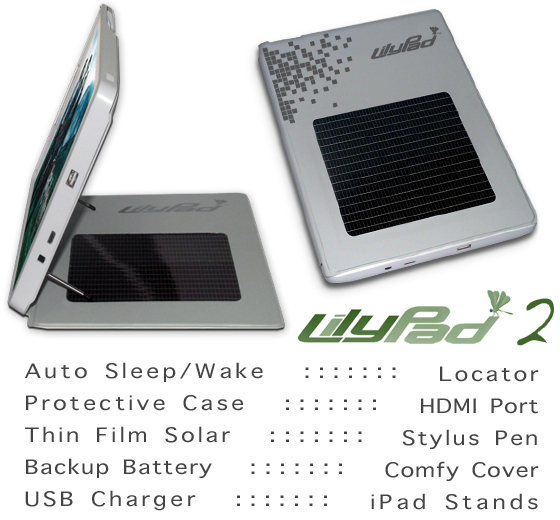 With all of the electronic gadgets we have nowadays, keeping them all charges is always a problem. David Foster has an idea to solve this problem and calls his solution the LilyPad. The concept is based on a principle similar to the modern calculator, and that’s to harness light and convert it into electricity in order to power the device. This product is in the form of a case for your iPad or iPad2 that will automatically keep the tablet charged by using not only the power of the sun, but any indoor lights as well.

At the heart of the product is a technology called “solar ink.” Created by a company called Innovalight (and acquired by Dupont earlier this year, according to Reuters), the technology aims to provide cheap and easy to produce solar cells that are ten times cheaper to produce than normal cells. As the Kickstarter video shows, the cells are able to be created in very thin strips that are flexible, a sort of “liquid solar panel.”

While that’s a great start, David takes things even further by adding many other useful features to the LilyPad. Not only can the device charge your iPad, but it also has a built-in USB port that allows you to connect other devices in order to recharge them. Some other useful features that have been added to the LilyPad are a built-in HDMI port, a stand, and a device locator that responds when you whistle.

According to the project, the LilyPad has already received Apple certification and therefore we may see them on the shelves of an Apple Store in the future, just like the TikTok and LunaTik have in the past.