As a PC builder and gamer I find it fun and incredibly interesting to tinker around with my set-up, whether that’s buying a new graphics card to improve its speed, fiddling with the cooling to ensure everything can run smoothly, or overclocking to squeeze out some extra performance. I monitor many things, from the temperature of my CPU and its fan speed, to the frames per second and GPU load in games, just to see how capable my PC really is.

Traditionally I’d use a bunch of programs to monitor all these stats, including SpeedFan and Fraps, gathering info through pop-ups or windows on a second monitor. Then I was sent an LCDSysInfo – a small 2.8-inch LCD gadget that can be configured to show various stats – and monitoring my PC became significantly easier. 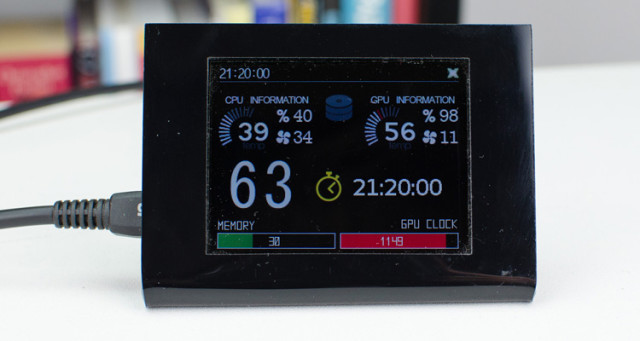 If you haven’t heard of the LCDSysInfo don’t be surprised, it’s the relatively unknown project of a Hong Kong-based hardware development team (ColdTears Electronics), and software developer Ezequiel Gonzalez. Originally the unit was sold just to developers for various uses, although Gonzalez wanted to display gaming related stats on it, and so started his own side-project. Purposing software called GOverlay, the system could be transformed into a remarkably handy gaming companion, and after enough work the team decided to sell this version to the general public.