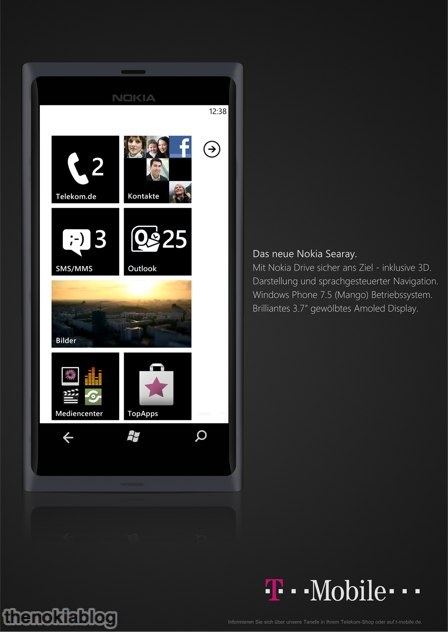 Of all of the Windows Phone 7 smartphones that have been rumored to be under development at Nokia, the one that keeps being mentioned the most is the Nokia Searay (also spelled as "Sea Ray" in other news reports). Now The Nokia Blog reports that it has received a leaked image showing the Searay smartphone as part of a promotional ad created by T-Mobile Germany, who presumably would be selling the Searay in that country when it becomes available.

The ad itself also has a description, in German, that when translated states, "The new Nokia Searay. Drive safely to your destination with Nokia – including 3D. Representation and voice navigation. Windows Mobile 7.5 (Mango) operating system. Brilliant 3.7″ AMOLED curved display." This tracks with some previous info about the smartphone that has been leaked in the past few days. Another leaked promotional ad said that the Searay would have some kind of voice navigation support and 3D mapping. Yet another rumor claims that the Searay would also have a 1.4 Ghz processor, 16 GB of storage and an eight megapixel camera.

All of these reports suggest that the Nokia Searay will be the flagship smartphone for its long awaited Windows Phone 7-based line up of devices. At least two other phones, the Nokia Sabre and the Nokia Ace, have also been revealed via Internet leaks. Nokia and Microsoft are still keeping official details about these products secret but we should learn more when the company  holds its Nokia World event in London on October 26.

Update: There's some speculation in the comments that the leaked ad could in fact be faked.