When Lenovo originally announced the Y530 and Y730, it said that Nvidia's new graphics cards would be available when they were announced. Instead, the Legion Y540 and Y740 were born at CES this year. Indeed, the big difference is that we've got ninth-generation processors, new Nvidia graphics cards, and a 144Hz display.

What I'll say right now is that I really like the Legion Y540. I'm glad that Lenovo stuck with the design from last year because it worked. It's not as flashy as other gaming laptops, so it's great for work and play. Without an RGB keyboard and with GTX 1660 Ti graphics, it feels like an incredible prosumer PC.

As I've mentioned and will probably mention a few more times, the chassis is the same as on the Legion Y530. That's not a bad thing though. It's made out of polycarbonate, but it feels premium with its textured lid. The texture and the black color are in contrast to the smooth, gray, aluminum Legion Y740. 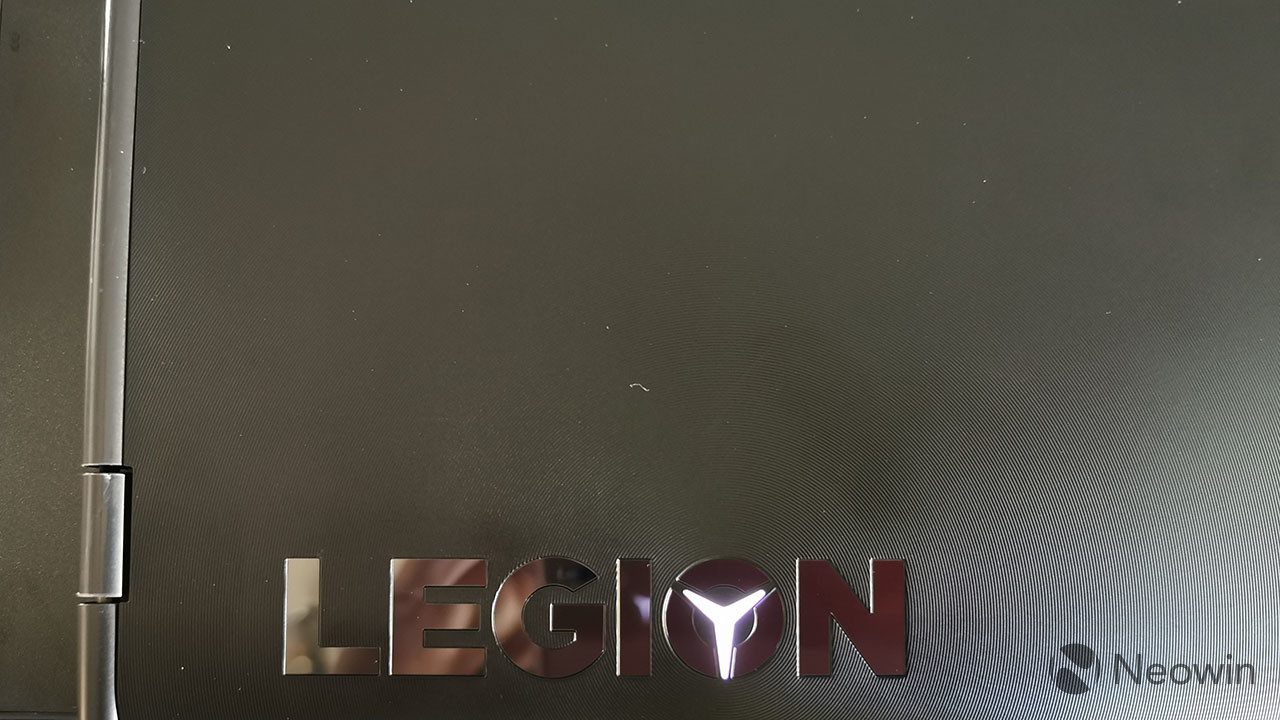 Looking at it, I don't think that it looks like a gaming laptop, and that's the point. It looks like a powerful laptop that stands out from the pack, but there's no snake logo or anything like that. This is an entry-level machine, and the people that buy it likely aren't buying a separate laptop just to play games on. This might be your only PC, which means that you'll be using it everywhere, possibly in professional environments. I think Lenovo does a great job of making it look great in both areas.

Design-wise, the other thing you're missing out on by not getting a Y740 is RGB lighting. The Y540 has lighting in all of the same areas as the Y740, but it swaps out RGB lights for white lights. This feels like the perfect choice for how I imagine the Y540 to be positioned, as a prosumer PC that's geared toward people that want to be able to play games. 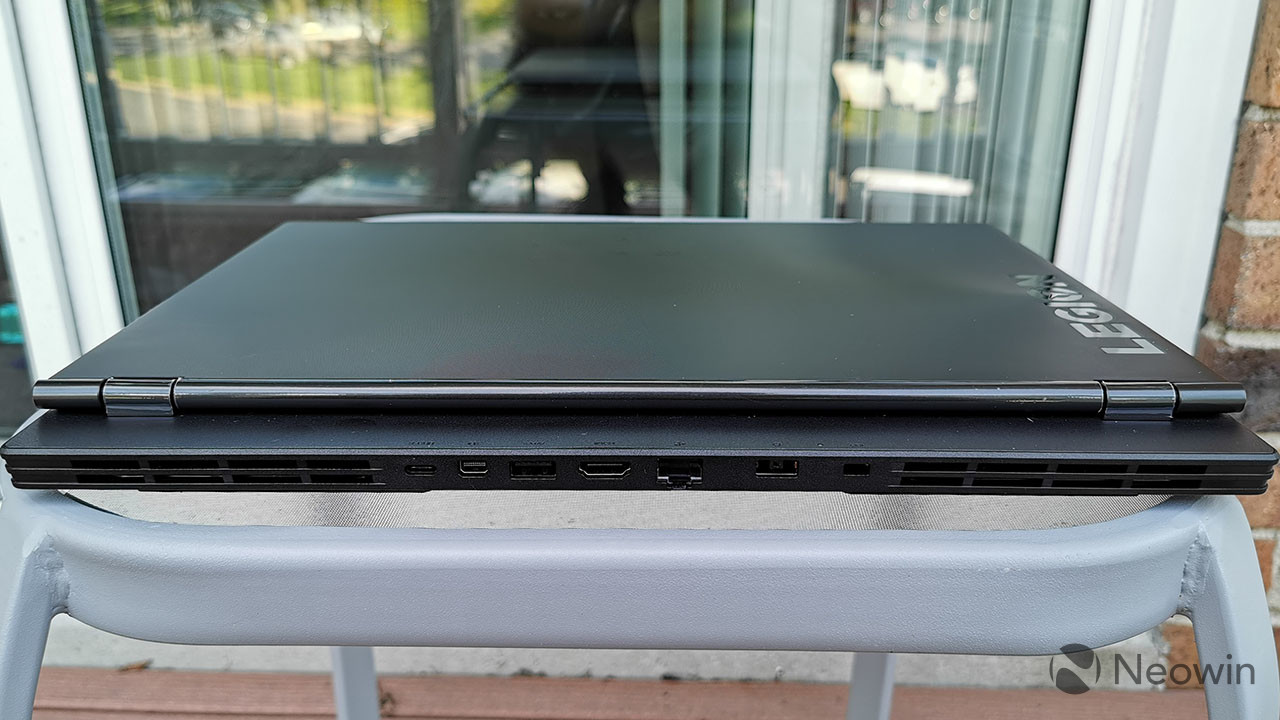 The Legion Y540 is loaded with ports, and since the chassis is the same, don't be surprised that the ports are. Most of them are in the back, which is fantastic for cable management. On the rear side, there's a USB 3.1 Gen 1 Type-C port, a USB 3.1 Gen 1 Type-A port, Mini DisplayPort 1.4, HDMI 2.0, Ethernet, a Kensington lock, and a power port.

As you'd expect, it has Lenovo's USB Type-A-shaped power adapter. USB Type-C is out of the question here, since it comes with a 230W power brick and that's well beyond what USB Type-C supports. I thought 230W was a bit surprising though, since this machine really isn't as powerful as something with RTX graphics. I would have expected 135W or something like that, but that's fine. 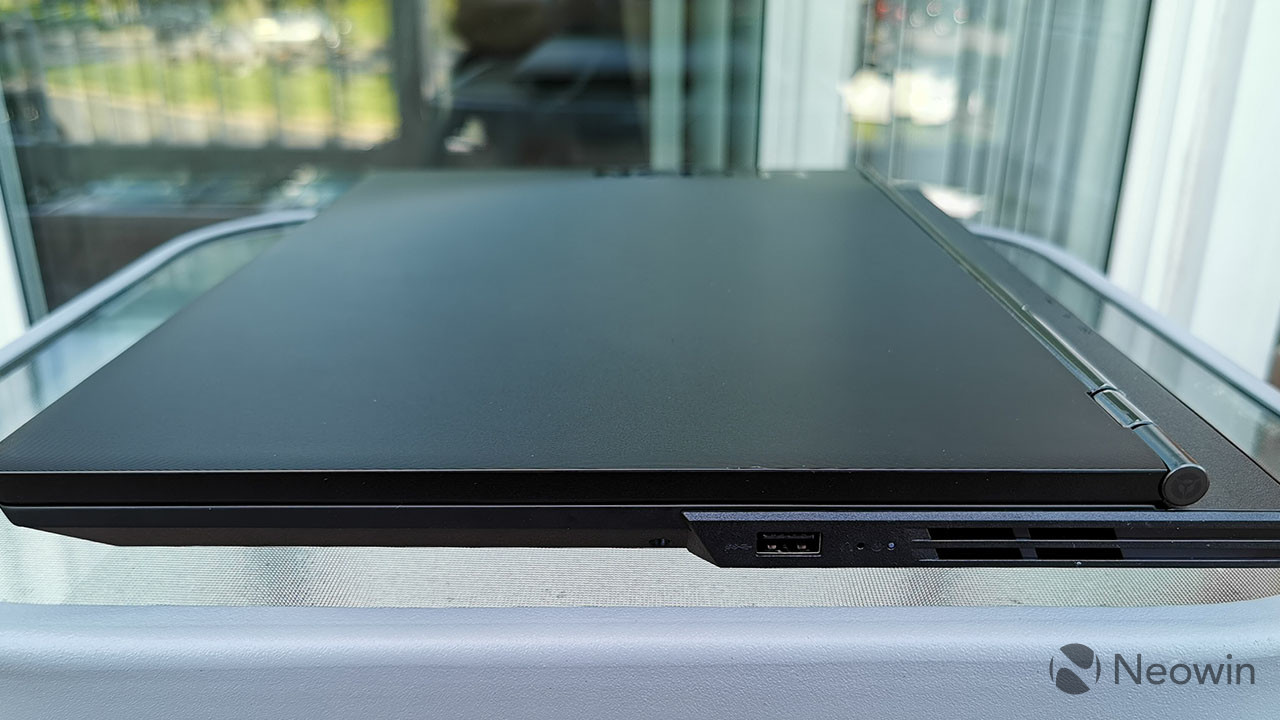 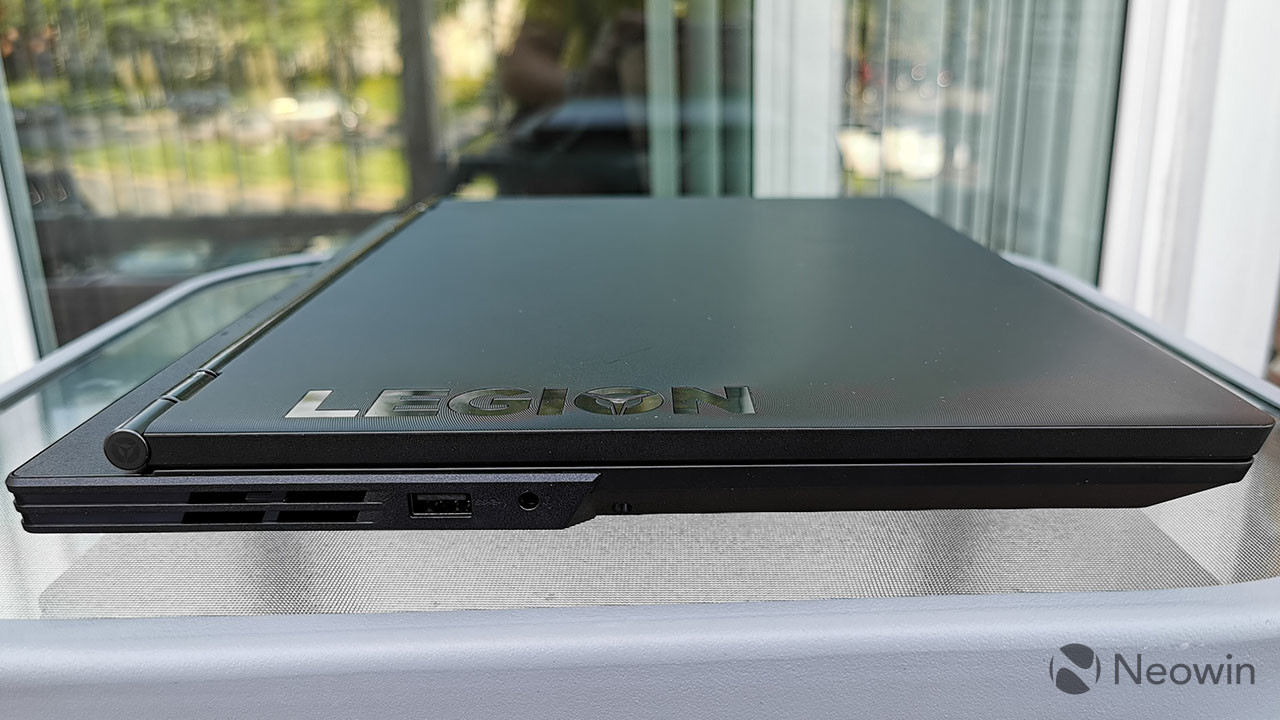 The bottom panel can be removed with 11 Philips-head screws, so you can easily access the internals. On the front of the bottom panel is where you'll find the dual Harman speakers with Dolby Atmos. There's also a grate for the dual fans toward the back, and you'll also find vents on both sides of the back corners. Basically, Lenovo put fans in the corners so it could pump air out of both sides of the machine. Lenovo says that there are 70 blades per fan.

One downside is that it's a bit on the thick and heavy side, coming in at 5.07 pounds. Naturally, the thickness helps for ventilation, but it's a touch heavier than I'd have liked.

This is what I'm just going to start calling a gaming display. There's no support for touch, it's anti-glare, and if you're looking for the prettiest screen, this is not it. But things like touch and glossy screens aren't good for gaming. For example, a piece of dust on a touchscreen can cause real issues with false touches, and a glare in the wrong spot can cause you to not see something in a game. 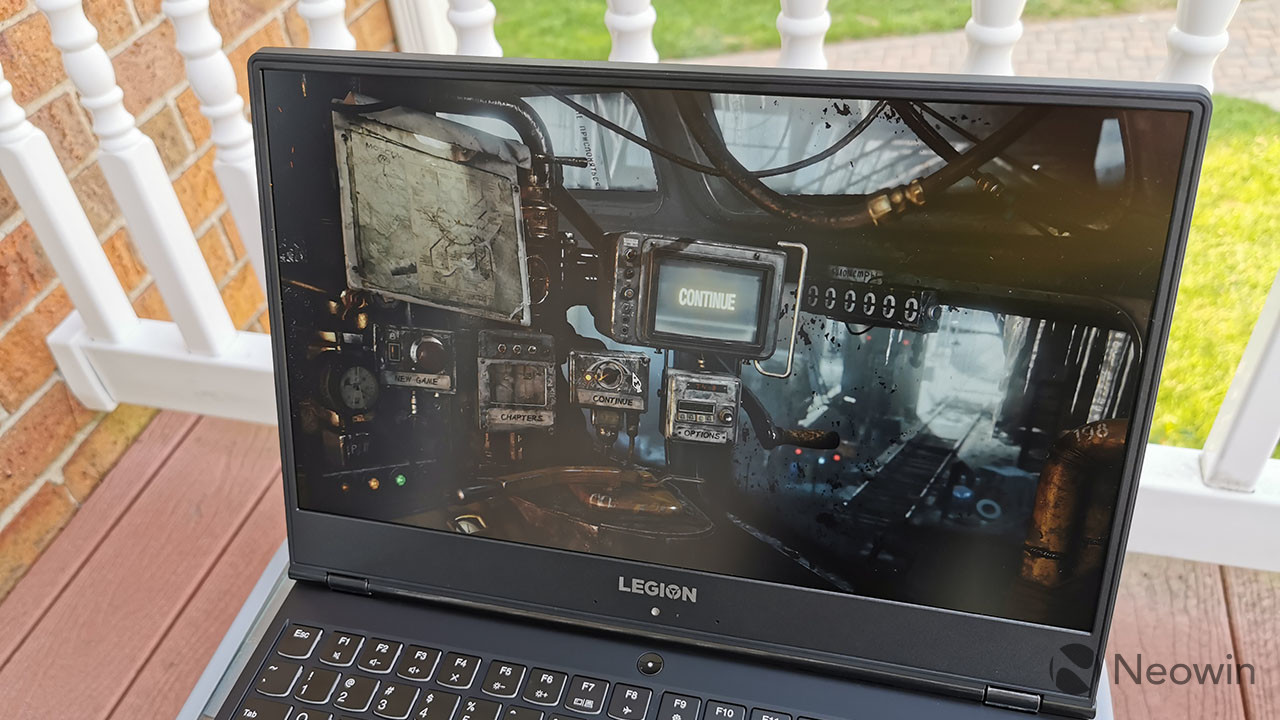 Indeed, when playing games, a proper display is critical, since you need to be constantly aware of everything on it. That's where the 144Hz refresh rate comes in. In a world where a handful of milliseconds can make a difference, that faster refresh rate matters.

The Dolby Atmos audio is pretty good as well, with the two Harman speakers on the bottom of the PC. The speakers are loud enough, but they won't exactly fill a room. Personally, I'm more of a headset man anyway. More importantly, the speakers are clear, lacking any kind of tinny sounds that you might find from lesser speakers.

All-in-all, the display/audio combo on the Y540 is pretty great. Between a high refresh rate and solid audio, it's a great experience for playing games, or anything else that you're doing. For primarily streaming media, you might want a different type of screen. 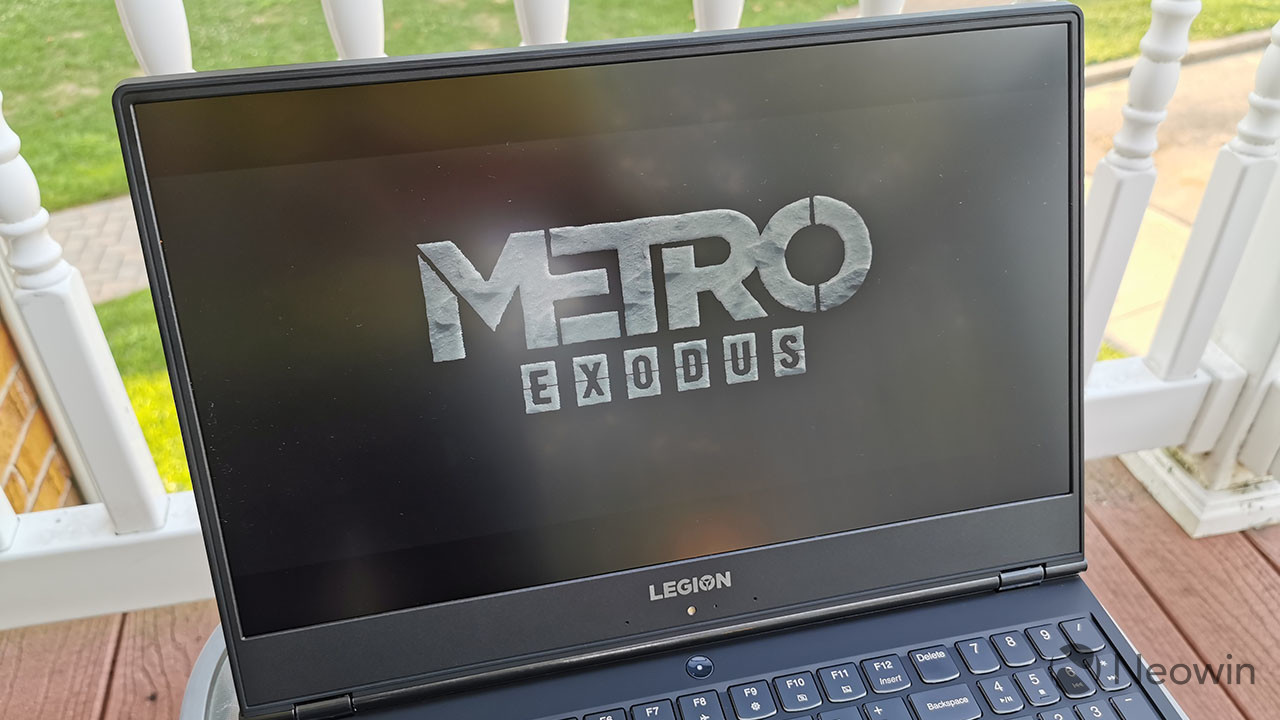 There are narrow bezels on three sides of the display, similar to the 15-inch Legion Y740. Unfortunately, that means that the webcam is below the screen, which can be good or bad. If you use the webcam, it's bad. And in today's day and age, webcam usage on consumer laptops is not common; however, you might want it for game streaming, so keep that in mind.

The keyboard and trackpad are pretty standard here, and I do feel like I'm writing the same thing over and over. After all, this is the exact same keyboard that I reviewed on the Legion Y530 and 15-inch Legion Y740. The 17-inch ones that I've reviewed have a number pad, but that's the only difference with those. 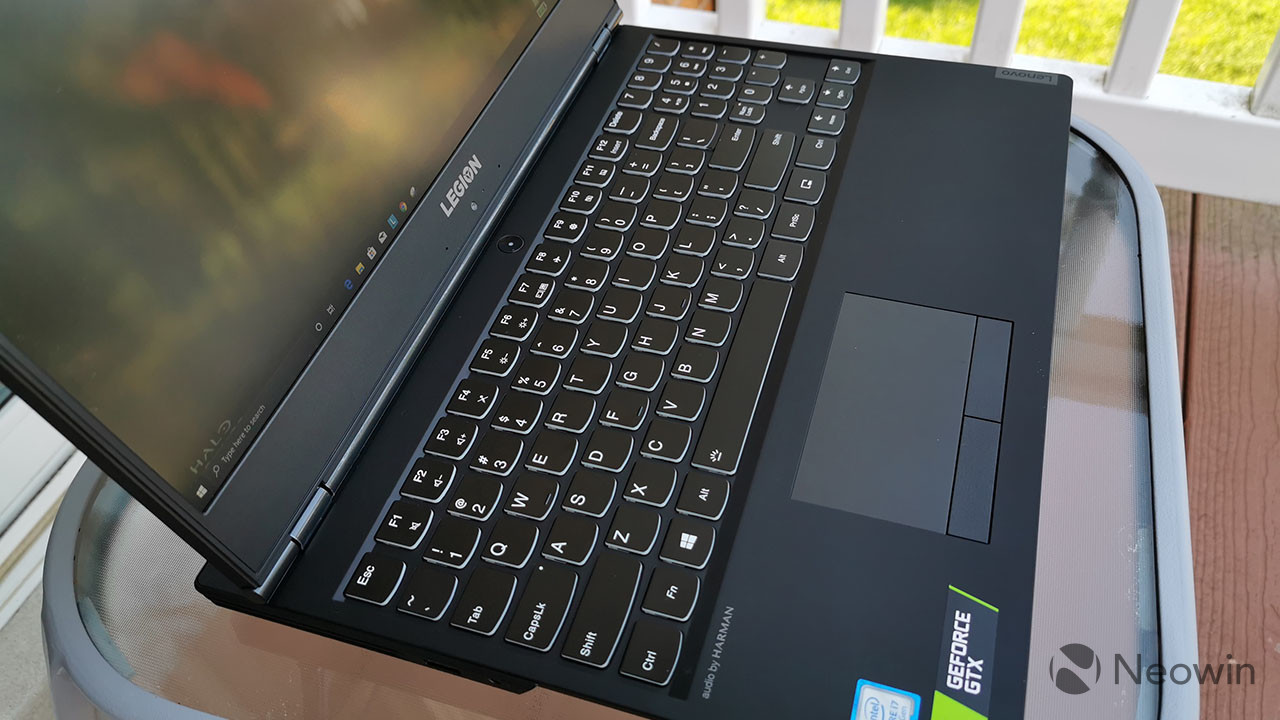 The keyboard uses Lenovo's usual islanded keys that are curved on the bottom. It's actually really comfortable to type on, and it's quiet too. But this is one of the things that I really enjoy about this PC. It's not just a gaming laptop. I can type articles on this as well, or edit video, or do mostly anything else.

The keyboard has a white backlight, another thing that I like about the Y540. I'm really not a fan of RGB keyboards, or really any of the other flamboyant features commonly found on gaming laptops. If I was buying a laptop exclusively for gaming, that would be another story. But if you're buying something exclusively for gaming, you're probably looking at something higher-end than the Legion Y540. This is the type of laptop that you'll probably be taking into environments where an RGB keyboard might not be completely appropriate. 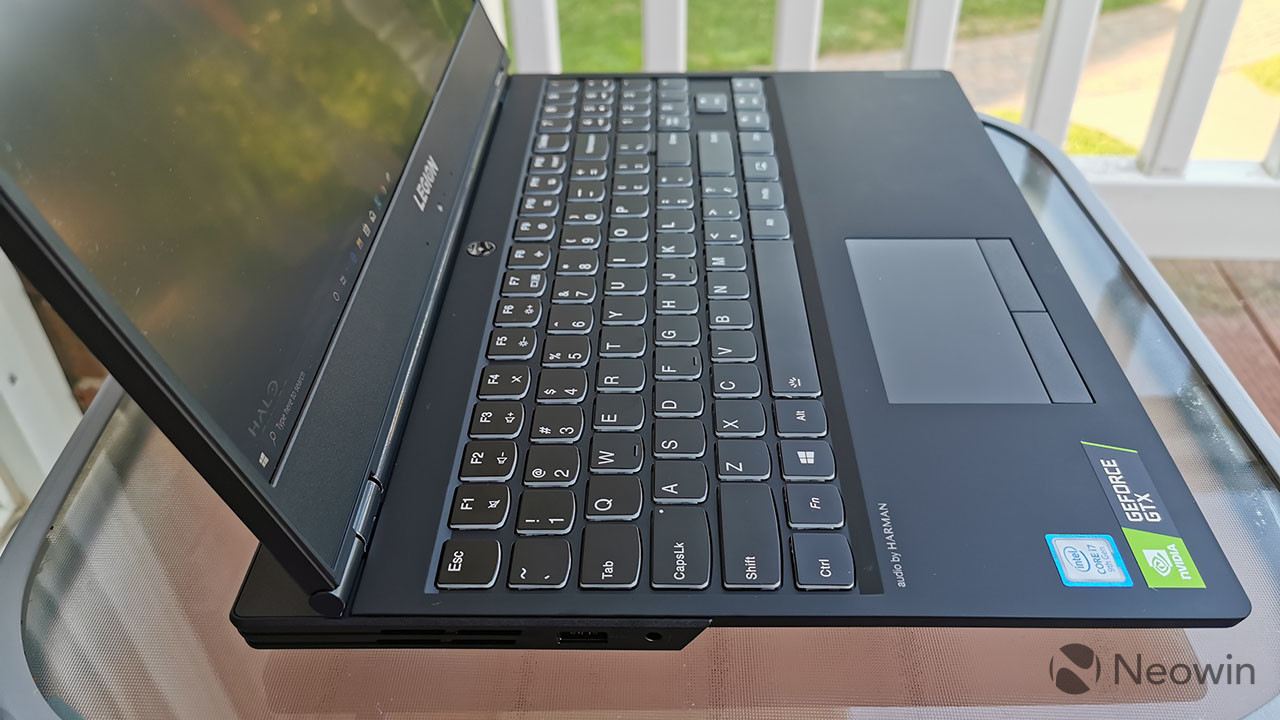 The trackpad is fine, using Microsoft Precision drivers. It's not clickable, which is common in gaming laptops. After all, if you're using the trackpad to control a game, you don't want to accidentally click on something. Instead, there are two physical buttons above it.

There's also no fingerprint sensor (or IR camera for that matter), another thing that's pretty common on gaming laptops. For this one, I'm not sure why. But sadly, you'll be using passwords and PINs on this machine.

You can spec it out with 32GB RAM and an Nvidia GeForce RTX 2060, which supports real-time ray tracing. That's a serious bump in gaming performance. Also, the RTX 2060 only costs $50 more, so it might be a worthwhile upgrade.

This machine also has a 1TB SSD, which shocked me. Most gaming PCs that I get my hands on have a small SSD, like 256GB, and than a big HDD. This one just has a big SSD, so you get a big performance boost from that.

The Core i7 included is a 45W hexa-core CPU with 12 threads. It's the typical chip that you'd find in gaming laptops or some mobile workstations, unless you go really high-end with a Core i9. And of course, the GTX 1660 Ti is Nvidia's latest graphics card from this generation without going RTX.

As far as real-world performance goes, it's fantastic. This is really my favorite kind of device, with that prosumer level of power. Editing 1080p 60fps video works fine, although it will choke up if you try to edit 4K 60fps video, but you can still get the job done.

But of course, you'll want to know about playing games. After all, the best part of reviewing a gaming laptop is playing games on it. It really depends on the game. I played some Metro Exodus, and the Y540 struggled with it.

As you can see from the clip above, the game does stutter a bit.

As is the case with pretty much any PC, even an ultrabook, Cuphead runs perfectly fine. I also played Forza Horizon 4 for a while, and that played great.

As far as battery life goes, it's not great. You'll get a couple hours away from a charger if you're playing games or editing video, and a bit longer than that if you're doing something that doesn't require as many resources. The fact is that you can either have power or battery life, but not both.

As you can see, the Legion Y540 does quite well with its powerful internals. Next up is the Creative test, which checks more GPU-intensive tasks like video editing and mainstream gaming.

Interestingly, the scores aren't far off from the 15-inch Legion Y740 that I reviewed, which had a Core i7-8750H and an Nvidia GeForce RTX 2070. That got a 4,776 on the Home test and 5,804 on the Creative test. Finally, the Work test checks productivity-related tasks like writing and spreadsheets.

This also beats out the Y740 bit a narrow margin. That PC scored 4,122. I also ran PCMark 10's all-in-one test for those that like to keep score. 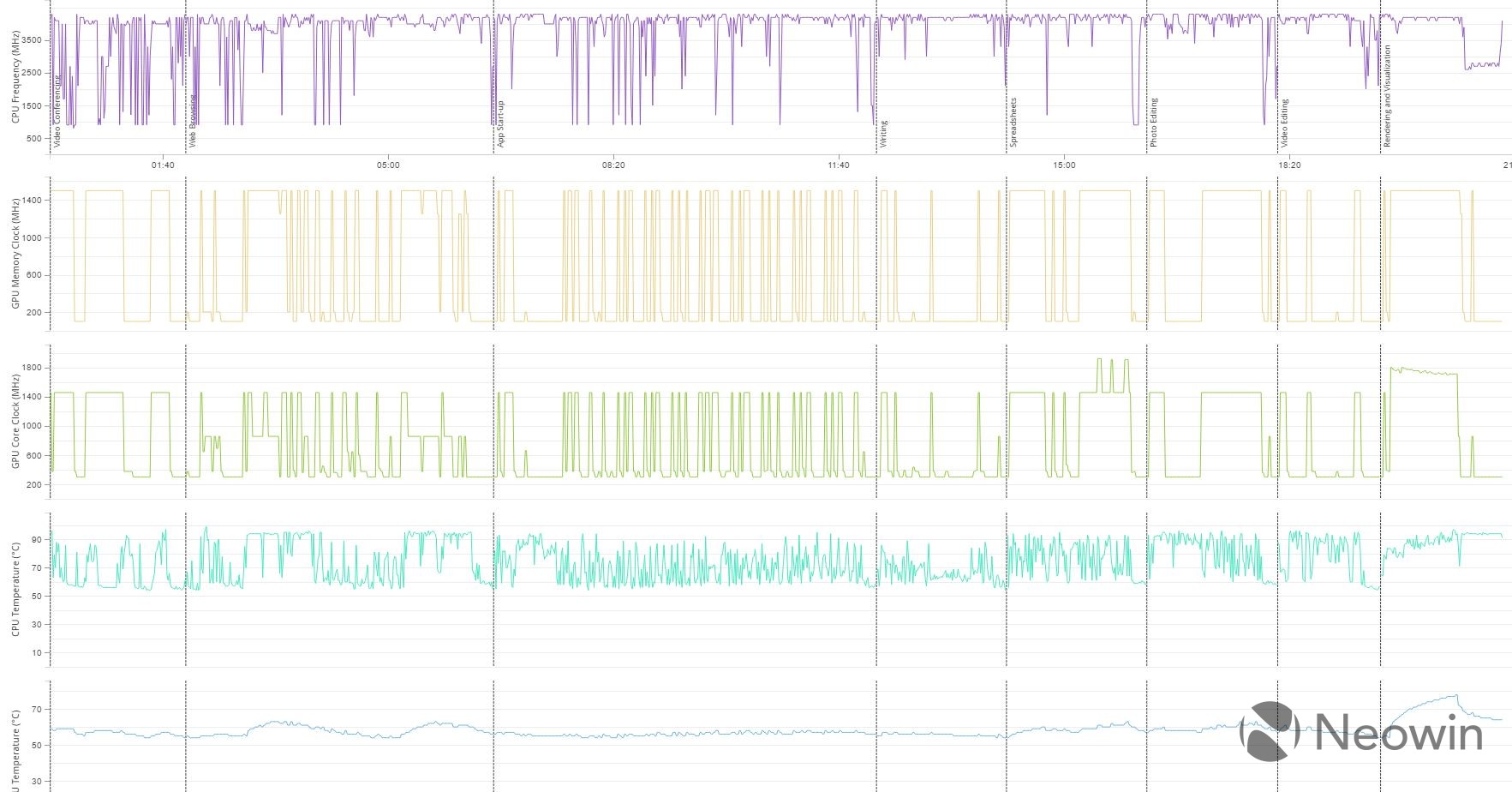 The Lenovo Legion Y540 is a phenomenal laptop in almost every way. My biggest complaints are really just that the webcam is placed underneath the display, and that it's a bit bulky and heavy at just over five pounds. Battery life isn't good, but that's to be expected. 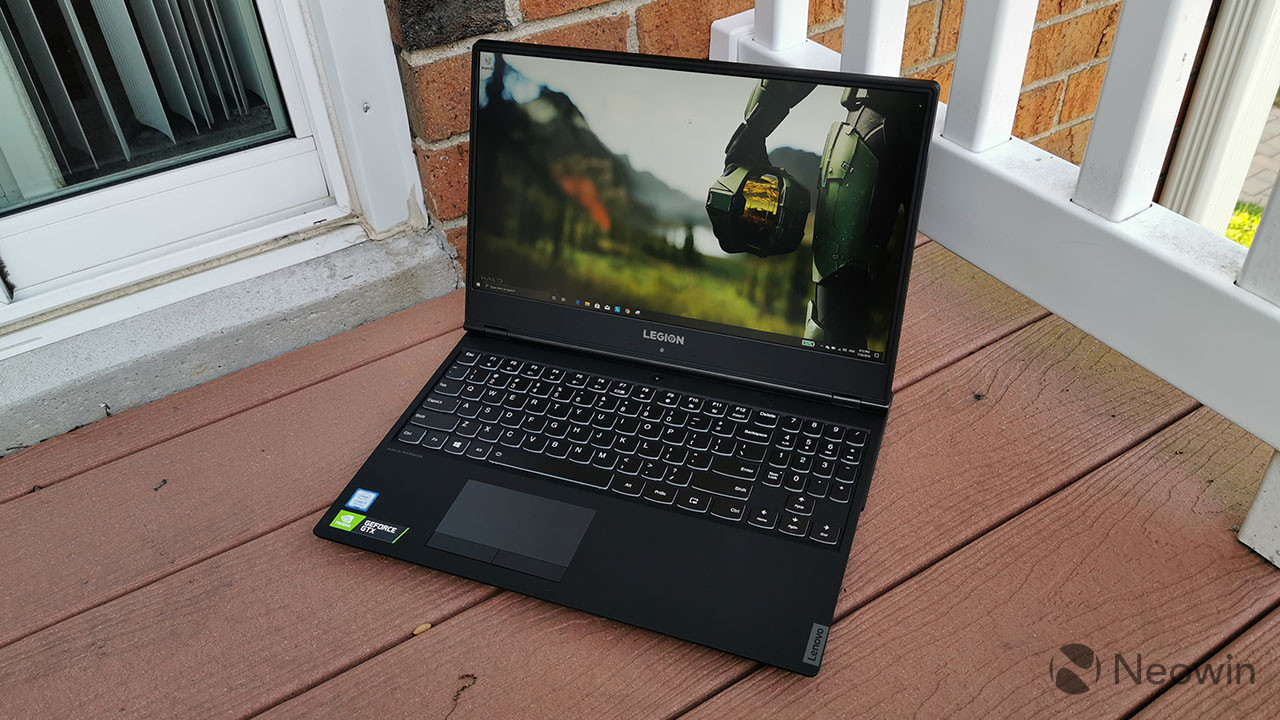 Other than that, this is a great machine for all of your needs. You can use it to play games, to work, to edit video, or pretty much anything else. It's got the power, it's got the style, and it's got a great display for gaming.

It's not, however, the best display if you're just going to stream video on this thing. If you want this kind of performance and you're not doing any kind of gaming at all, I'd direct you to something like a Dell XPS 15 or a Lenovo ThinkPad X1 Extreme. They have prettier displays and clickable trackpads.

Here though, we have a solid gaming laptop that's also great for other areas of your computing needs. Plus, with the specs provided, you can't go wrong at $1,400. 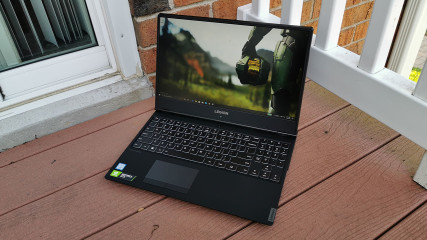 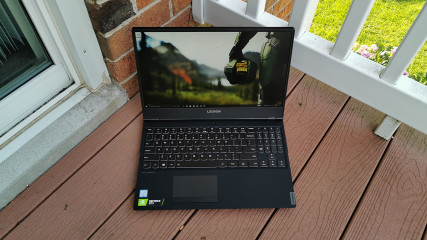 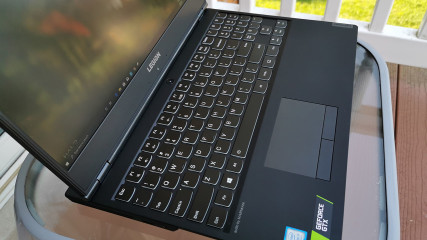 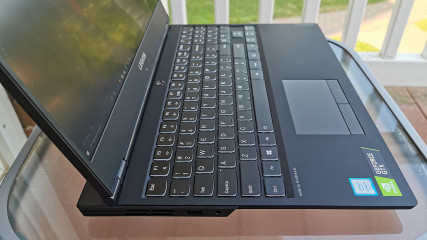 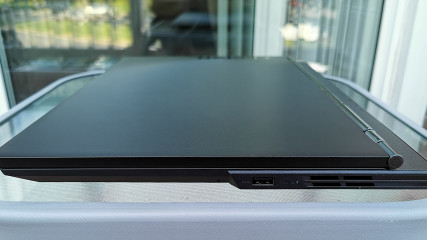 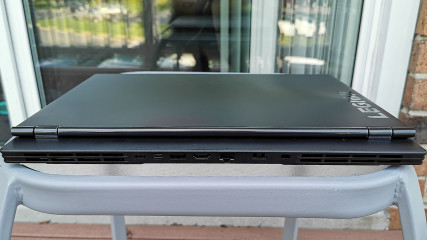 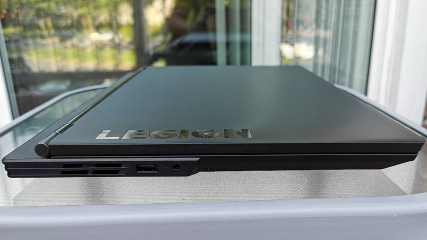 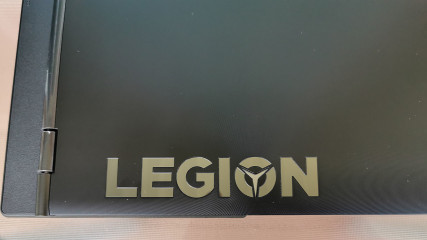 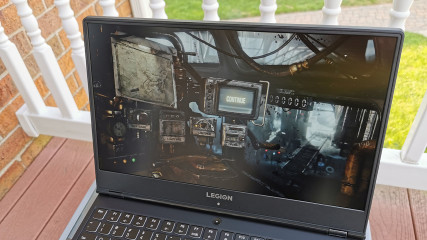 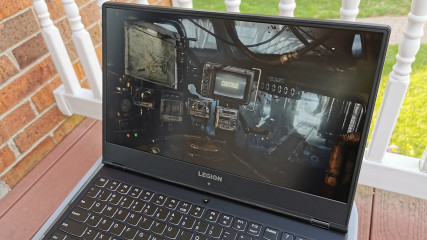 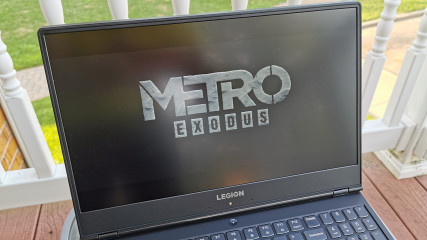 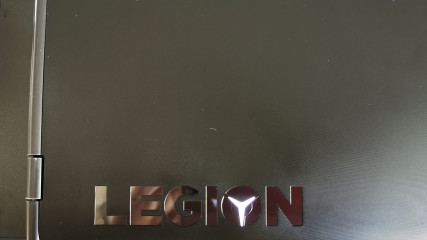