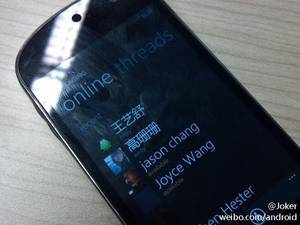 We have seen Windows Phone-based products made by companies like HTC, Samsung and most recently Nokia, among others. But is PC maker Lenovo about to make its presence known in the Windows Phone family? WPCentral.com claims that photos of such a device, with the name "S2" have surfaced over at a Chinese language web site.

The photos themselves are not the best by any stretch of the imagination so its possible that this could be an elaborate hoax, especially since the web site doesn't give any info about what kind of hardware specs the phone has. But WPCentral does point out that there have been rumors of a Lenovo-made Windows Phone that were posted back in December 2010.

While there may be no official hardware info about this phone, the images do show a front-facing camera which might mean that the hardware inside might be on the higher end of the smartphone market. However, the article speculates that it could also have some lower hardware requirements; more Samsung Focus than HTC Titan.

It looks like this phone, if it is the real deal, is being made for the Chinese market which likely means it will never make over here in the US. But it does show that Microsoft may be securing more hardware partners for its Windows Phone 7 operating system than expected. Certainly the OS received a lot of coverage earlier this week when Nokia revealed its long awaited Lumia WP7-based products.