At this point, there are many smart displays on the market, such as Amazon's Echo Show, Google's Home Hub, Lenovo's Smart Display, and more. They add an extra dimension to smart speakers with a screen, allowing you to do things like see a full weather forecast instead of having the whole thing read to you.

Lenovo's Smart Tab P10 is probably the most innovative take on a smart display, mainly because it's not a smart display. It's a tablet that you can dock in a speaker, making it more of a two-in-one.

It's a really nice idea. People don't use tablets as much anymore because we have larger phones, but with the Smart Tab P10, you can just pull it out of the dock and use it while you're on your couch. When you're not using it, it's an Alexa-powered smart display that does most of what an Echo Show can do.

There's also a lower end model with 3GB RAM and 32GB storage. You can also pick up the Smart Tab M10, which starts with 2GB RAM and has a smaller battery.

This is a pretty slick device. The tablet itself is a glass sandwich, and it's a color that Lenovo calls Aurora Black. Obviously, that means that it's black, but it also refracts light in a certain way that shows vertical, metallic lines. It's really nice, although I'm not sure how often you'll be looking at that. It's docked most of the time. Still, it's worth noting that it's a pretty sexy tablet. 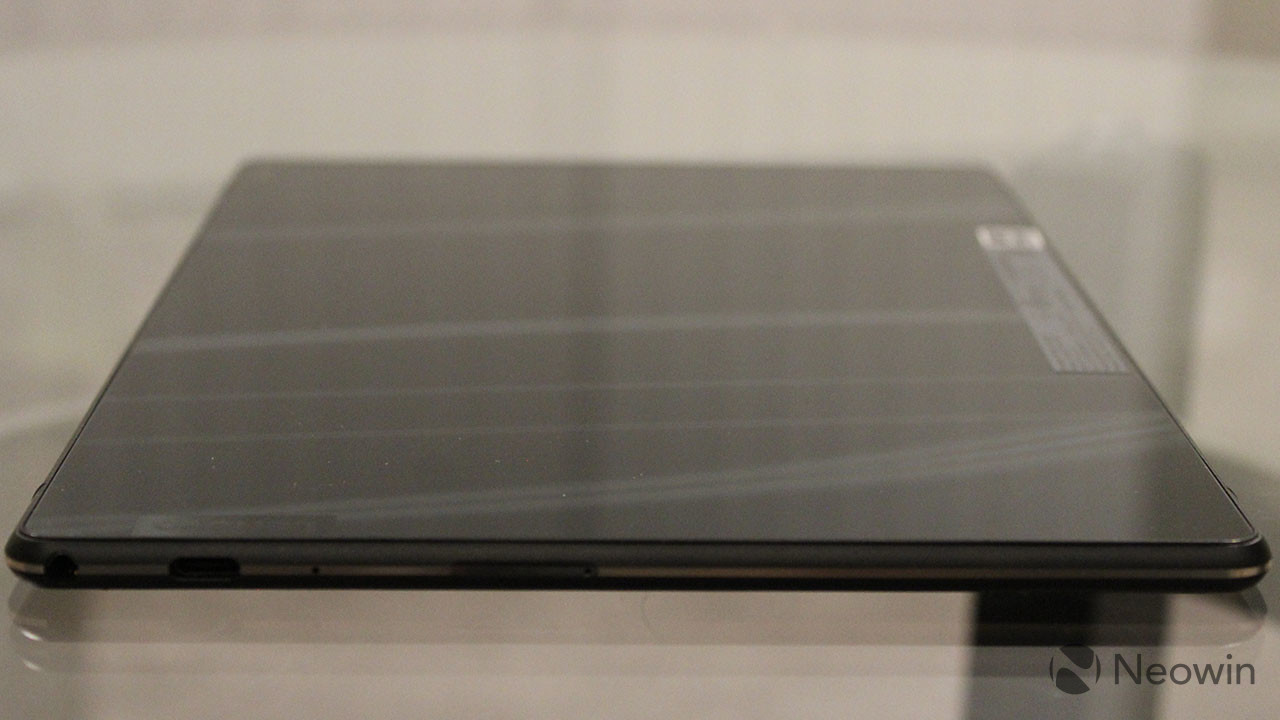 It also has a metal frame with a silver-colored accent around the edge. When looking at it in landscape orientation, it has a volume rocker and a power button on the left side, and on the right side, there's a USB Type-C port for charging and a 3.5mm combo audio jack. This is a standalone tablet, so you don't need to charge it with the dock or anything. I've not used the USB-C port at all, since I think you'll be keeping it in the dock when you're not using it, but it's nice to have the option. 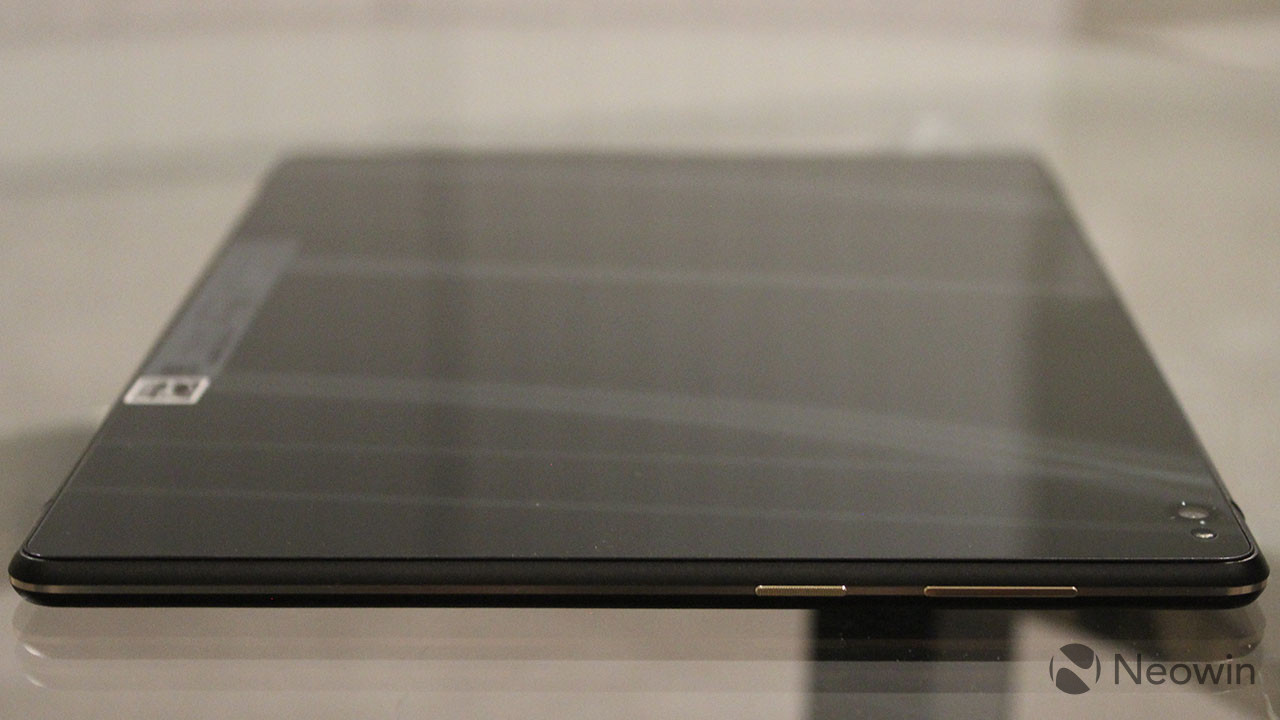 Both the top and bottom of the tablet have two speakers, powered by Dolby Atmos. The audio quality is pretty great too, even if you're not using it with the speaker. I'm happy to see that Lenovo saw the importance of this, as you still might be using it to watch a movie when it's removed from the dock. 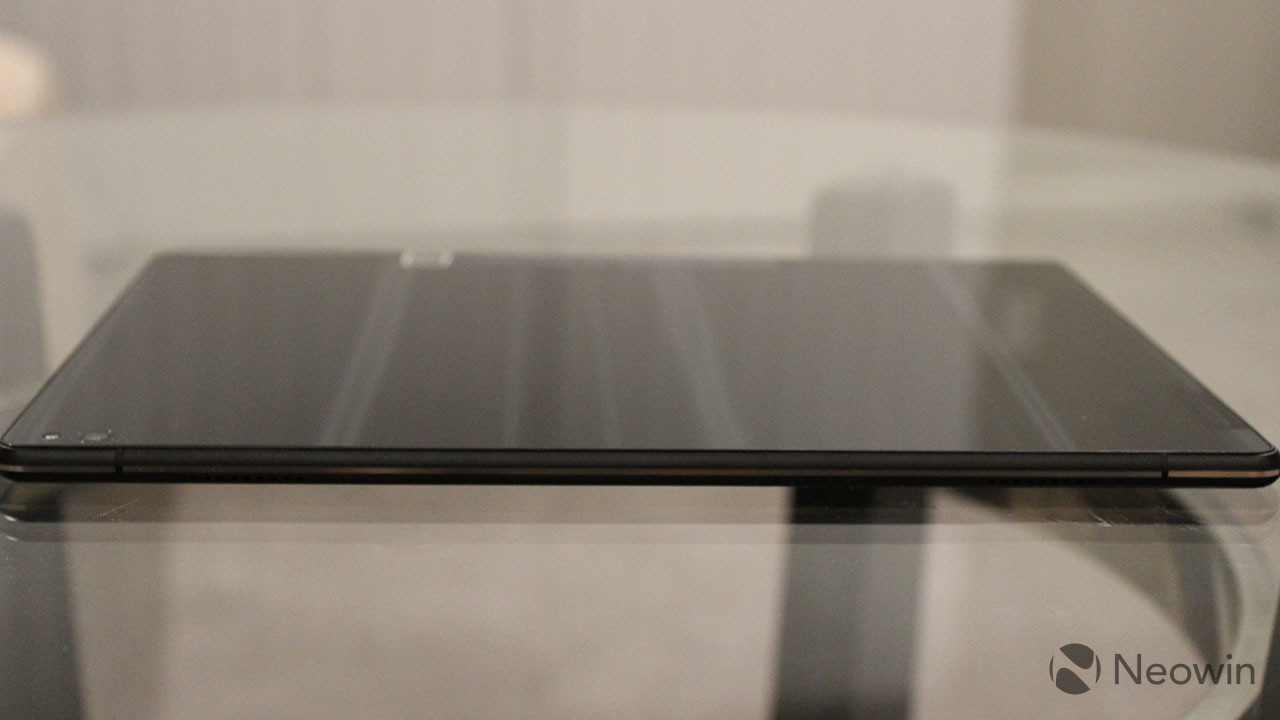 On the front of the device, there's a fingerprint sensor below the screen. This comes in handy, as most fingerprint sensors do, but if you don't use the tablet often, you'll just end up having to type a PIN anyway. 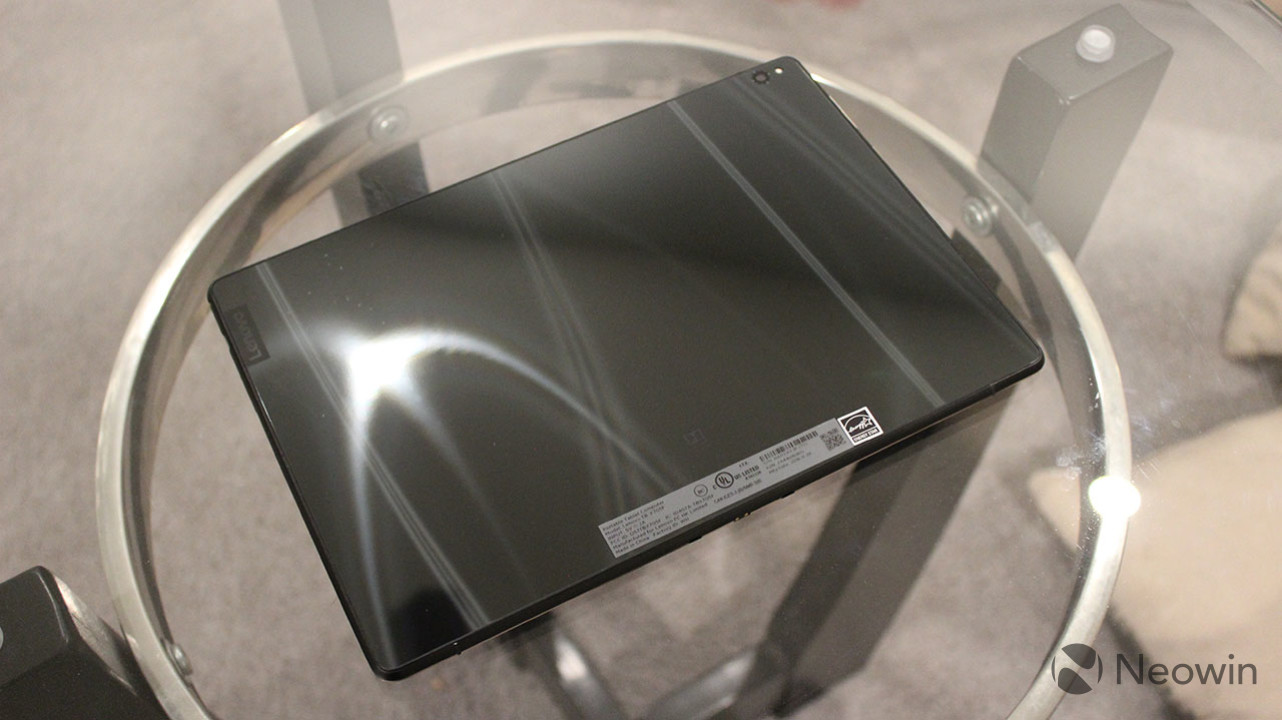 The dock is pretty stylish as well. It's a dark gray color, covered in fabric on all sides with rounded corners. The slot to insert the tablet seems to be a bit too wide though, and sometimes it's tough to know if it's docked properly. In fact, I'd just say it's too easy to dock improperly, especially for a device that's meant to be taken out and put back frequently.

The Lenovo Smart Tab P10 has a 10.1-inch 1920x1200 display, which means that it has a 16:10 aspect ratio. The aspect ratio is better for a tablet then a 16:9 screen, or something even taller like we see from modern smartphones. Tablets tend to do better when they're a bit wider, especially when used in portrait orientation.

The display itself is pretty good, and it's plenty bright enough for indoor use. I don't think of this as the type of device that you'd want to bring outdoors much, although you could if you jacked up the brightness all the way. The resolution is good too, offering Full HD+ at 10.1 inches. 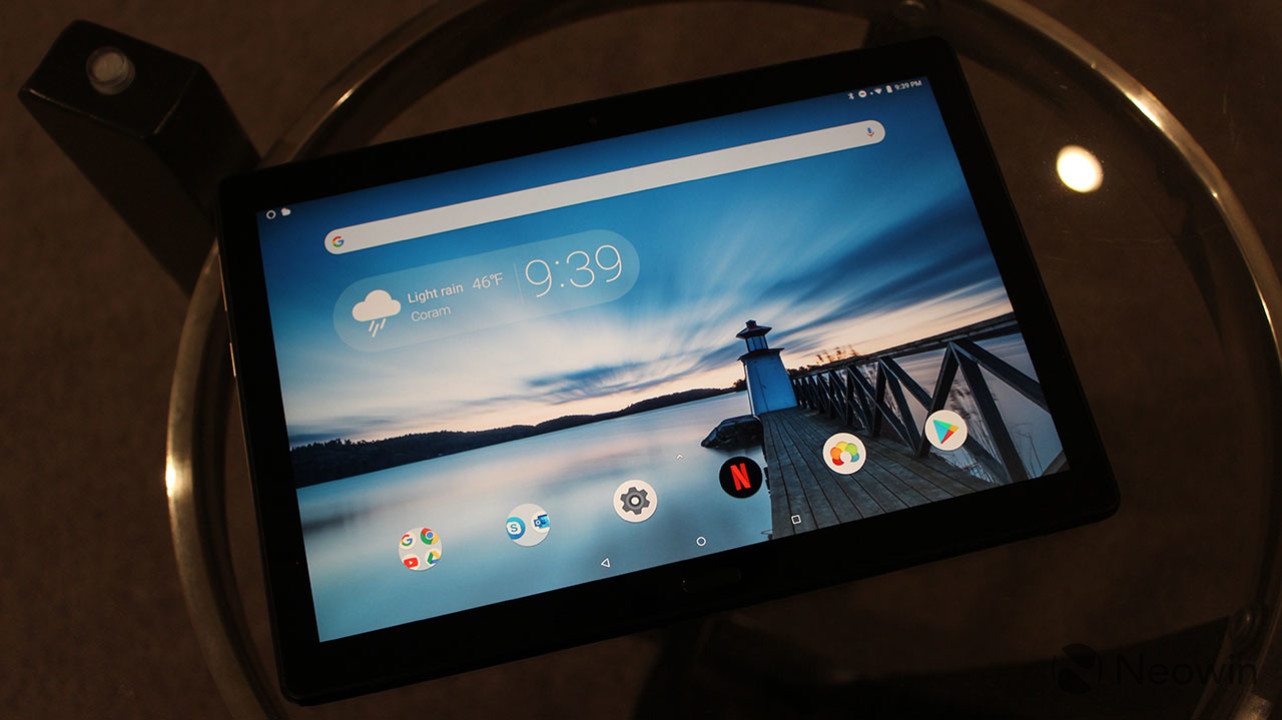 There's a night mode, which cuts down on the blue light emitted from the screen at night. Blue light can keep you from sleeping well. This is a feature that most screens have these days, but it's worth noting, since this seems like the type of device that you might pick up to read a book before bed.

There's also a focus mode, which lets you block incoming notifications from being displayed. This was something that I found myself using more often than not. It's really a family device, so I didn't need notifications coming in all of the time. And yes, you will hear the notification chime while it's docked and showing Alexa stuff. 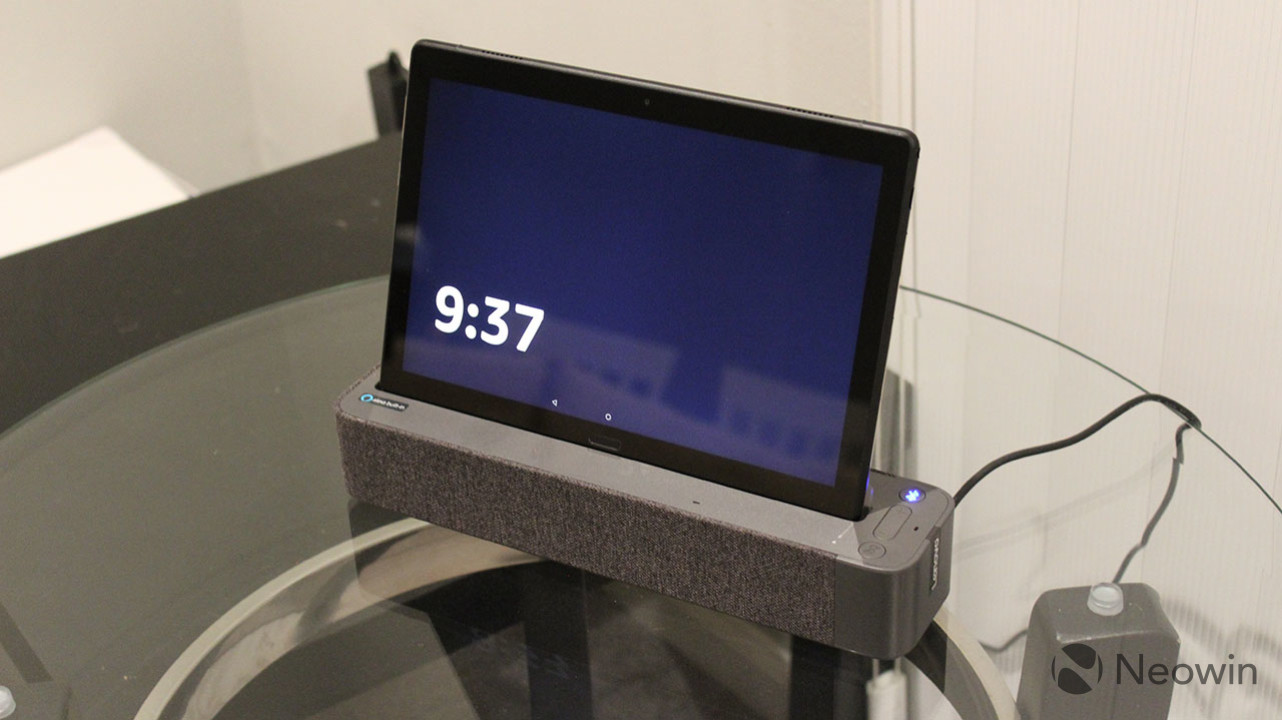 One other thing I'll point out is that this is an LCD; it's not OLED. That's always worth pointing out for something that has an ambient display. When you turn the lights out, it will only show you the time, but you can still tell that the screen is backlit.

Most of the time, you'll probably be using the Smart Tab P10 as a smart display, which uses Amazon Alexa. I've asked Lenovo why it chooses which assistant for which devices, and I've not received a real answer. I'm curious because this really seems like it should be a Google Assistant device. When it's docked, you're interacting with Alexa, but when you're using it as a tablet, Google Assistant is the native voice assistant on Android. 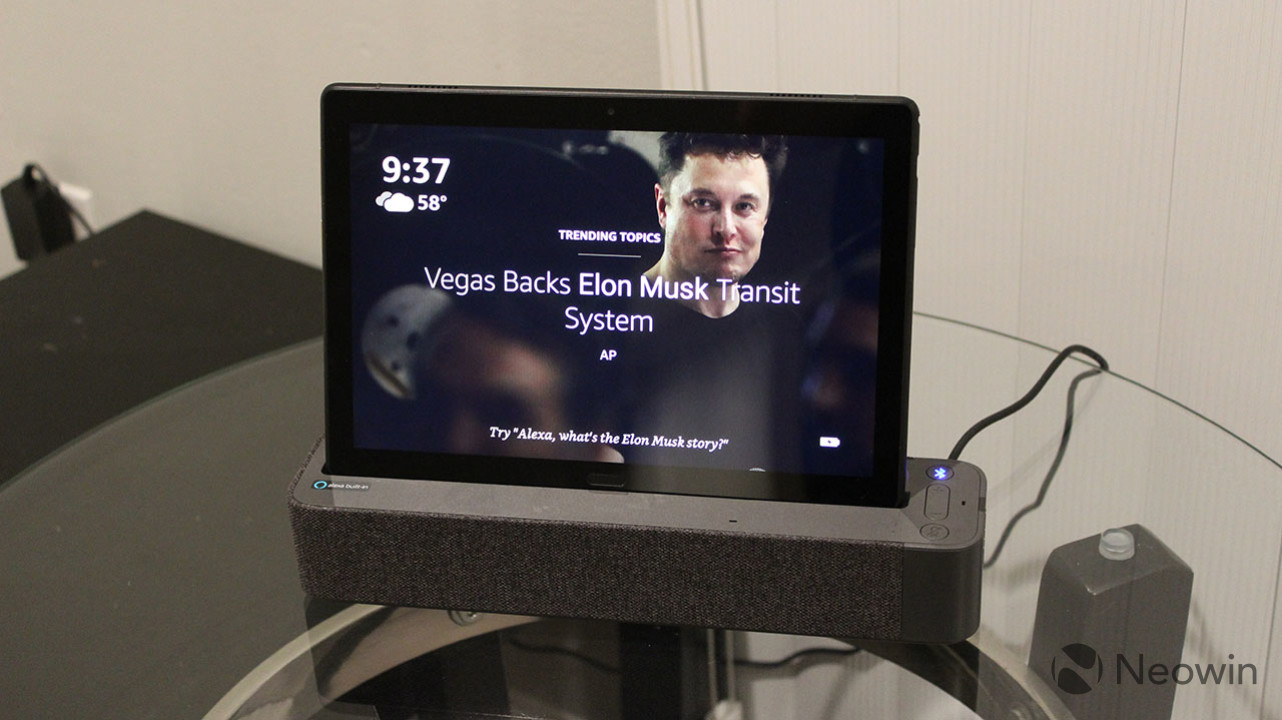 When it's docked, you'll see the time and weather on top of a stock image, along with various suggestions of what you can ask Alexa to do, trending topics, and more. This is an area where I favor Google Assistant, which has Google Photos integration and lets you use smart displays as digital photo frames. 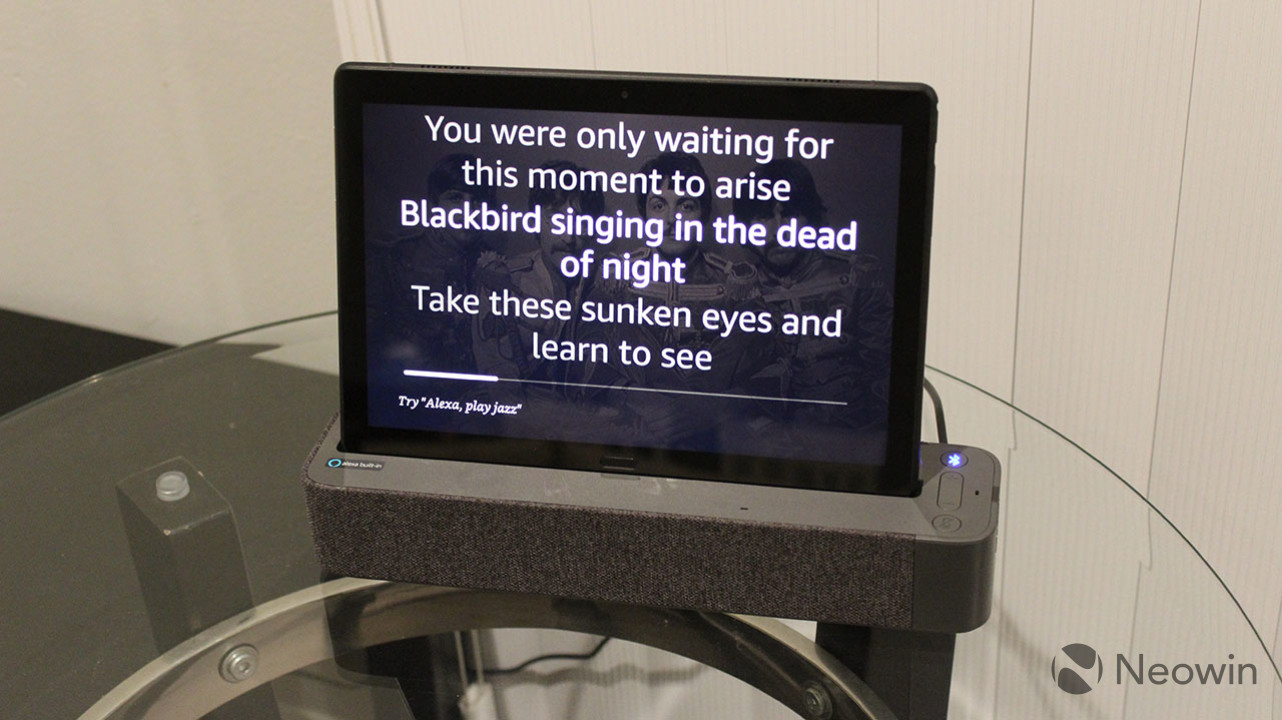 Probably the most useful thing that you can do with any kind of smart speaker is play music, and this obviously integrates best with Amazon's music services, Prime Music and Music Unlimited. Oddly, there's no Apple Music support, so you'll need a first-party Echo device if you want Apple Music with Alexa. What's cool is that Amazon has a feature called X-Ray Lyrics, which shows the lyrics of songs as they're playing. The line that's playing is highlighted as the song progresses, and it's cool to see on the larger screen. 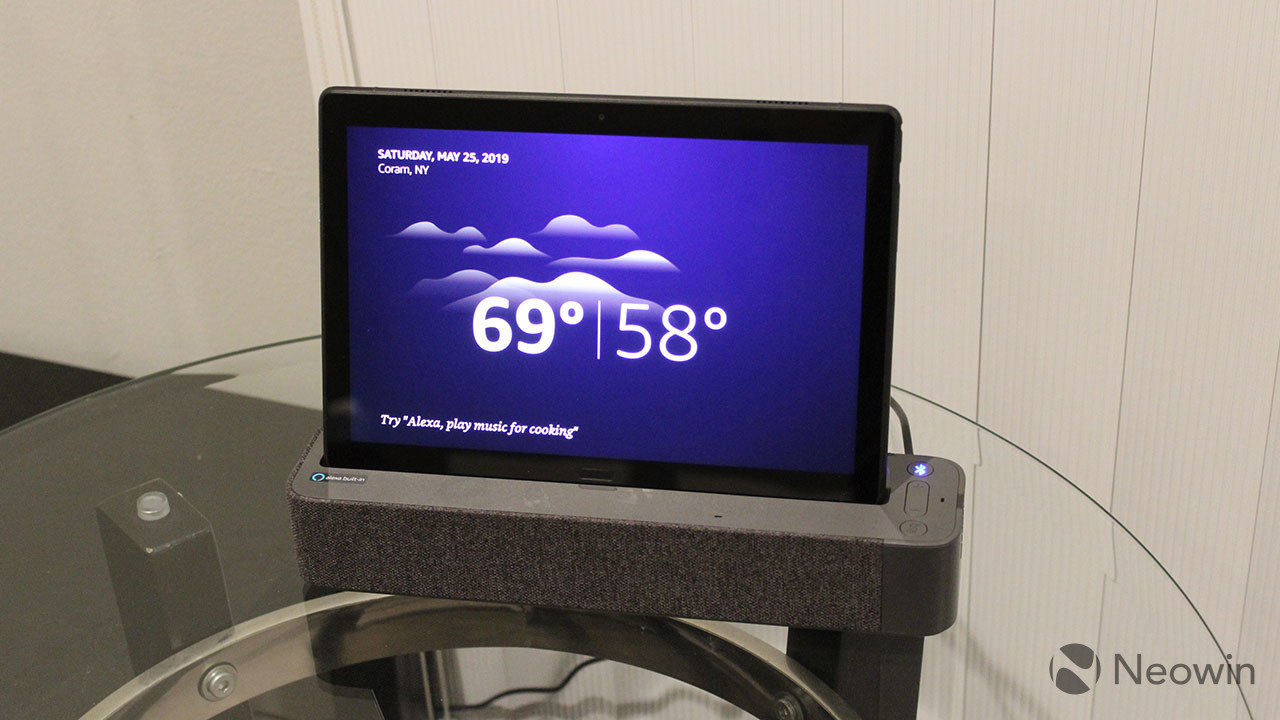 Another common use case is to ask for a weather forecast, and Alexa seems to show the weather forecast as it's saying it. This seems like a strange approach from Amazon, since the added display doesn't seem to have an advantage if you can't read ahead. If you ask for the weather, it shows you the current weather, then as Alexa tells you what the weather will be tonight, it switches to a screen with both the current weather and tonight's weather. It then shows an hourly forecast. You can also ask for a weekly forecast, and Alexa reads the whole thing. 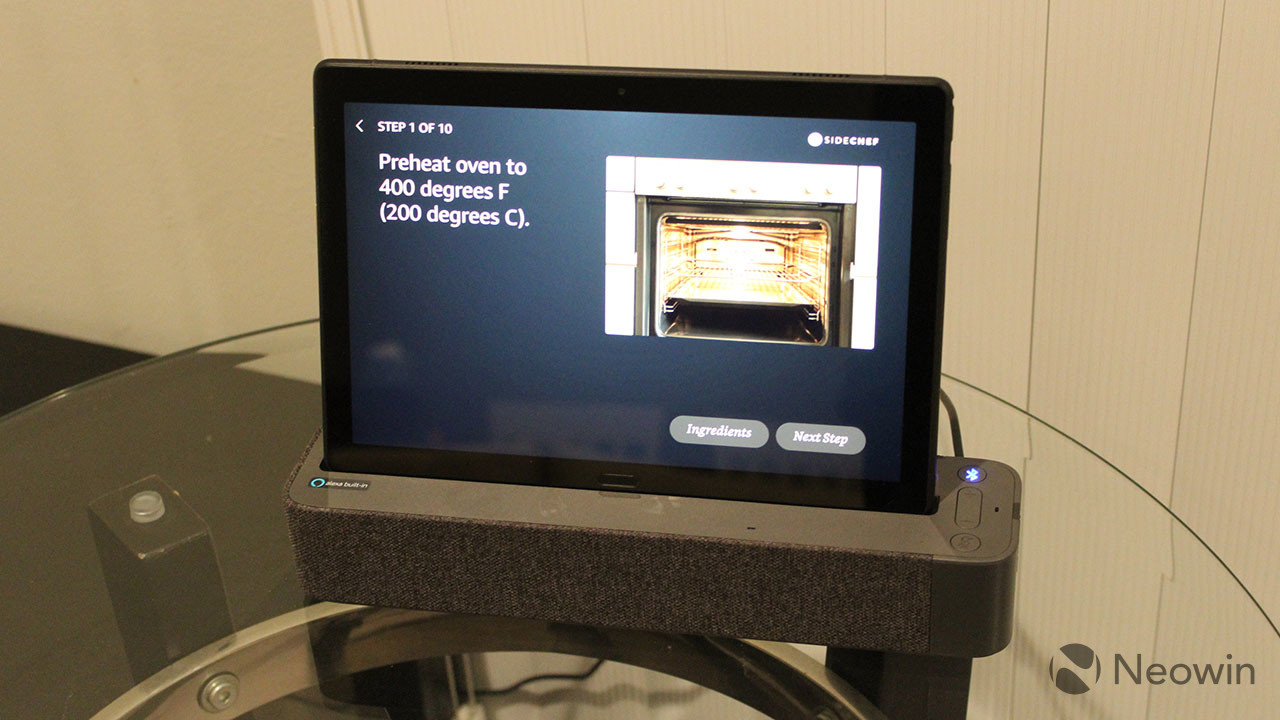 This device is also useful in the kitchen. You can ask for a recipe for something, and Alexa will provide a list of recipes. After selecting the one you want, Alexa will guide you through the various steps, or you can ask it to tell you the ingredients.

Obviously, this is a device that you'll be using as a tablet from time to time. Even if you rarely use tablets, it's so nice to have the option to just pop the Smart Tab P10 out of the dock and use it. It could be to read a book, to watch a movie, and so on. As I mentioned earlier, the audio quality is great and it has a solid display, so that part of the experience is phenomenal.

I did note above that this is a family device that might sit in your living room, so I wouldn't want notifications turned on. The good news is that you can easily add extra accounts, so you don't have to worry about everyone that uses this as a tablet using the same Google account. You can even add a guest account for those that don't have their own.

The part that's not great is performance. The Smart Tab P10 has an octa-core Snapdragon 450 chipset, which is along the lower end of Qualcomm's offerings. All eight cores are ARM Cortex-A53, and there is noticeable lag when launching apps and interacting with them.

When reading books in the Kindle app or watching movies, you won't have any issues once you're actually doing the thing that you set out to do. However, if you're checking social networks or doing something else along those lines, you'll notice an impact.

Don't get me wrong; the overall experience is pretty good. But if you're looking for a high-end tablet experience, look elsewhere.

For benchmarks, I used Geekbench 4 and AnTuTu. First up is Geekbench 4, which provides a CPU test.

As you can see, it doesn't do very well. The single-core score is lower than a Snapdragon 800-powered Nexus 5, and the comparisons didn't go any lower than that. The multi-core score was better though, comparable to a quad-core Snapdragon 820.

Next up is AnTuTu, which provides an all-in-one test.

Once again, the Snapdragon 450 doesn't perform well, as you can see from the different categories' breakdowns of how it compares to other devices. Note that this is the top-end model with 4GB RAM.

The Lenovo Smart Tab P10 is a really solid device, and it's an innovative solution for someone like me. When I say someone like me, I mean someone that doesn't use smart assistants a lot, and doesn't use tablets a lot. Putting them both in the same product makes a lot of sense here.

The tablet is docked in a convenient location whenever I need it. More often than not, if I think of using my iPad, I use my phone instead of going to the other room to get it. Now, the Smart Tab P10 is within arm's reach. And for the rest of the time, it's a smart display that I can use to play music, ask questions, and so on. 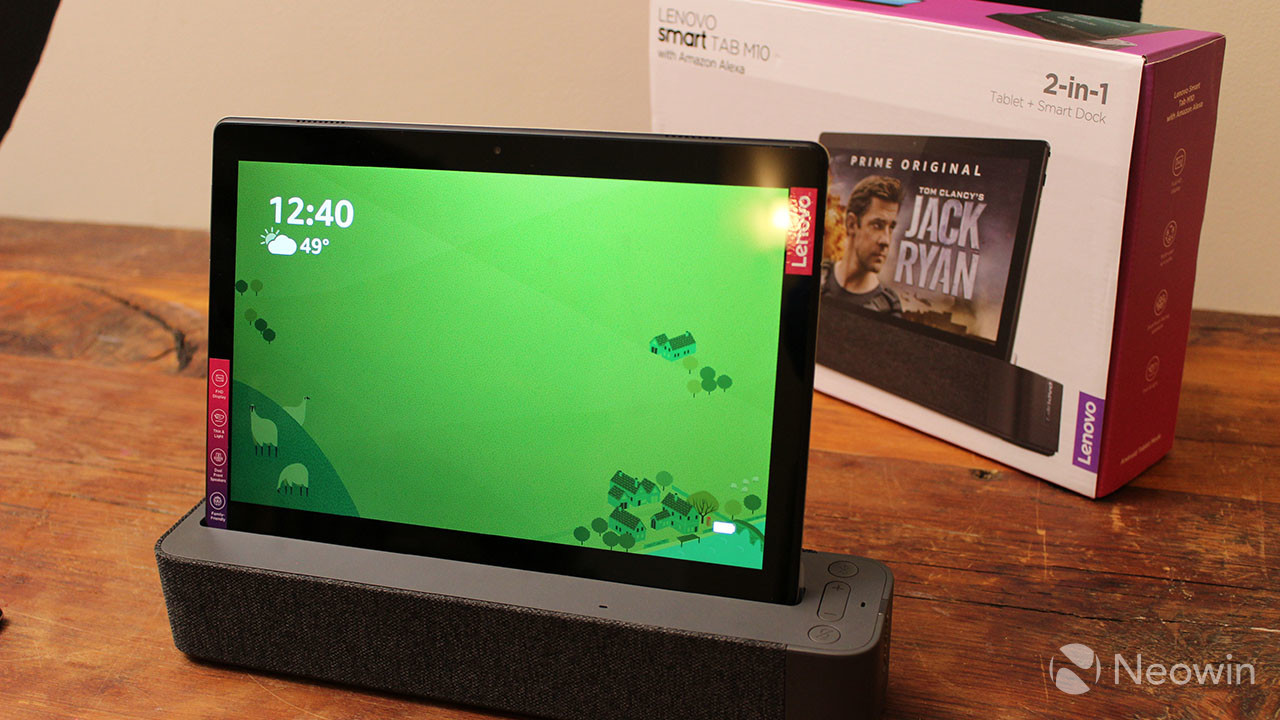 I think that the biggest drawback is the performance, which just isn't good. It's not as noticeable when the device is being used as a smart display, but you'll definitely notice it when using it as a tablet. Still, if you're only using it as a tablet occasionally, then you probably won't mind too much.

At $349, whether you should buy this or not depends on what you're looking to do with it. If you don't think that you'll ever take the tablet out of the dock, then there are cheaper alternatives. The same goes for if you don't plan on ever using the voice assistant side of it.

The product makes sense though. Your tablet is in a useful location when you need it, and it's a smart display when you're not using it. If that sounds like something that you can get behind, and you prefer Amazon Alexa over Google Assistant, you're good to go. 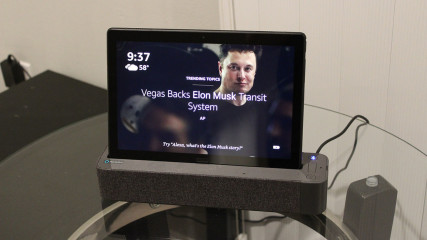 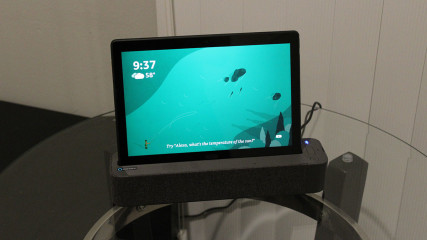 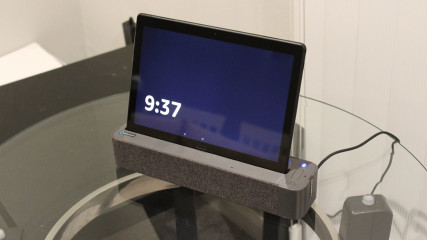 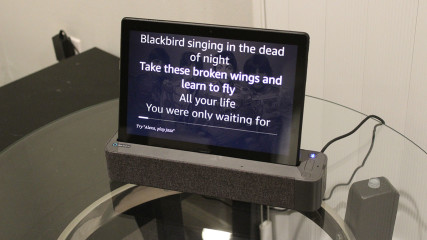 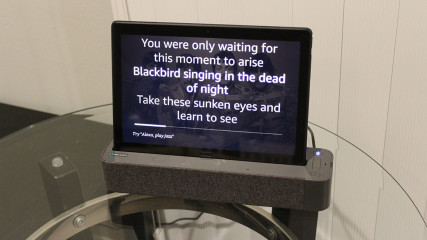 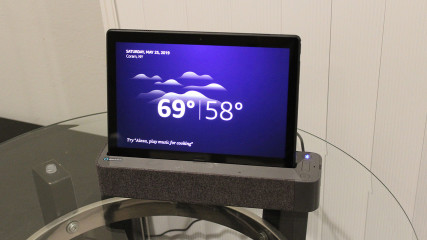 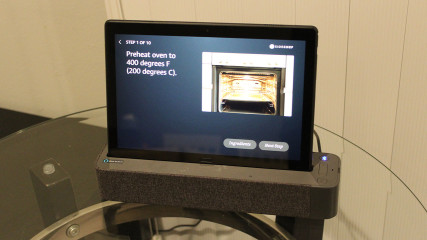 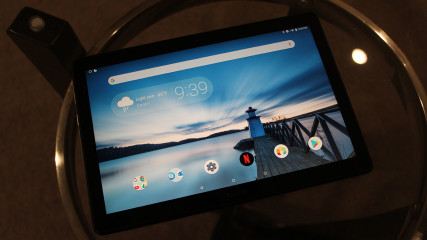 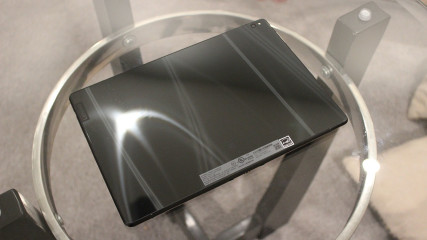 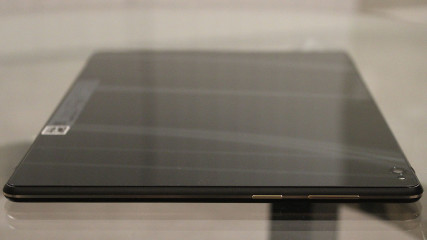 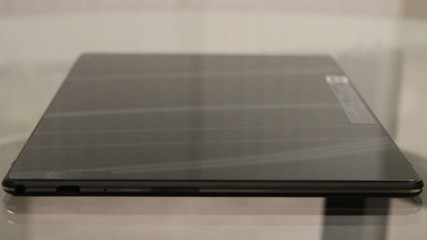 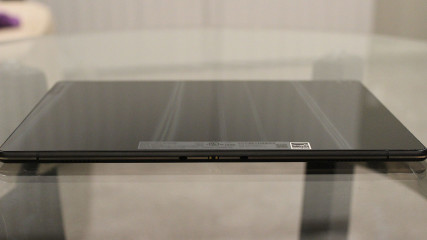 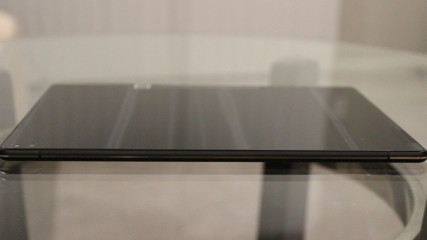