Lenovo's ThinkPads are some of the best laptops on the market, and to make it even better, they're consistent. No matter which one you buy, you can be sure that you're getting one of the best keyboards around, and an overall solid build quality.

They can get expensive though, so deciding between the different bells and whistles can be difficult. My personal favorite is the ThinkPad X1 Yoga, but what if you don't want to spend all of that money? That's where the ThinkPad L390 Yoga comes in.

The L390 Yoga borrows some of the best elements from the X1 Yoga, but it all comes in a package that costs under a thousand dollars.

Update: This review originally listed this device as costing $791.20. That's the price for the clamshell model.

The Lenovo ThinkPad L390 Yoga is made out of a combination of magnesium and aluminum with a glass fiber reinforced plastic palm rest. Because of this, you don't get that carbon fiber feel that's in the more expensive machines, but I rather like it. 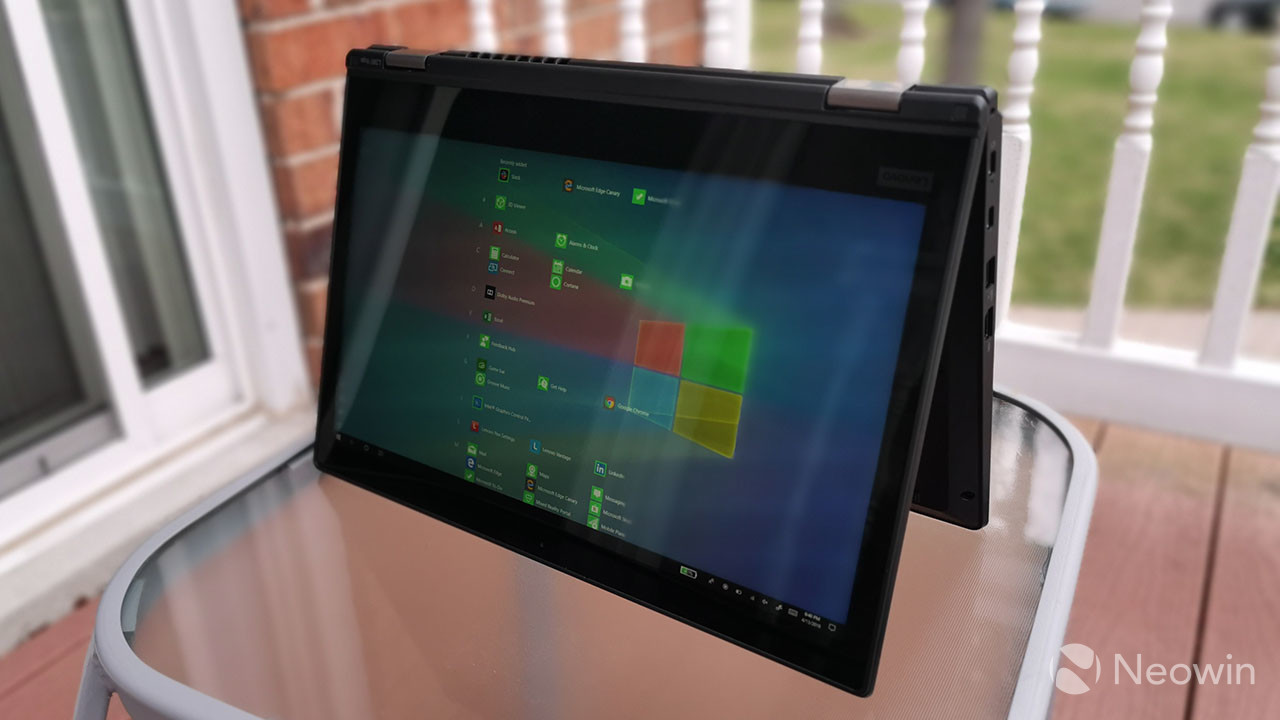 It comes in black and silver, and as usual, Lenovo sent me the black one. It has the older ThinkPad design, which is still used for non-X1 devices. That means it uses the silver ThinkPad logo and the silver hinges. 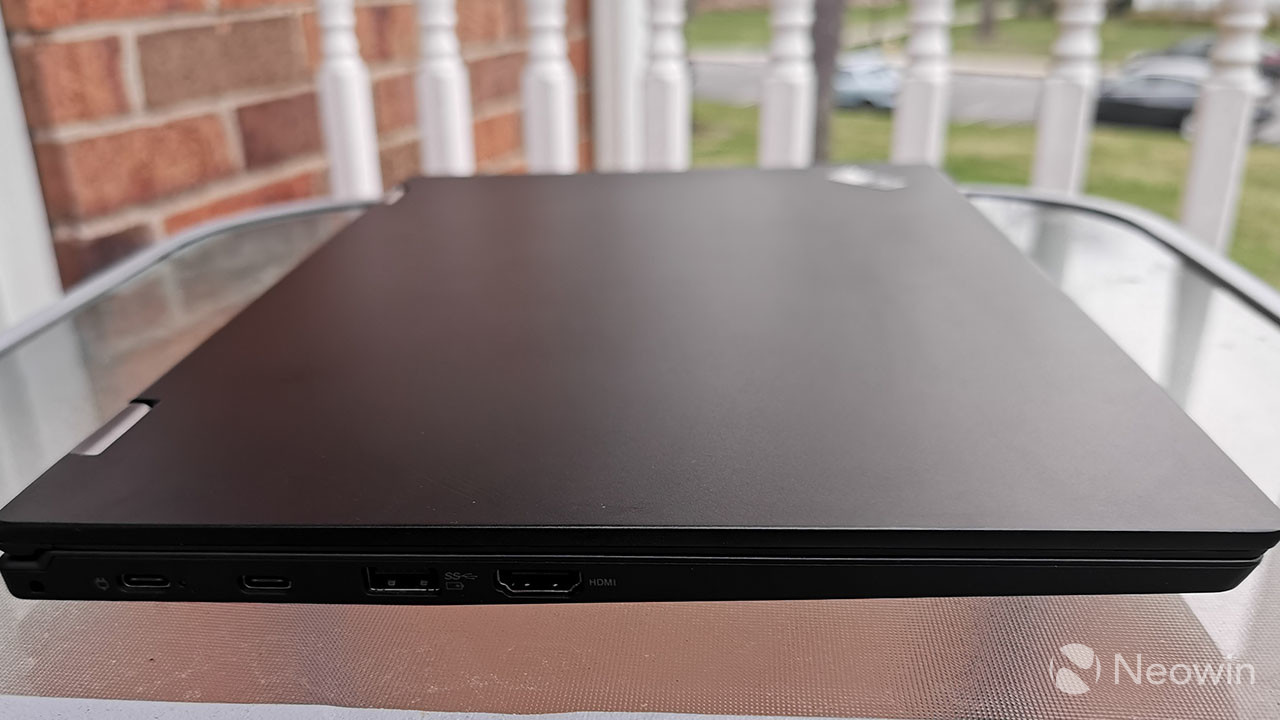 It has plenty of ports though. On the left side of the device, there are two USB 3.1 Gen 1 Type-C ports, either of which can be used for charging. There's no Thunderbolt 3 though, unfortunately. There's also a USB 3.1 Gen 1 Type-A port and HDMI 1.4b. 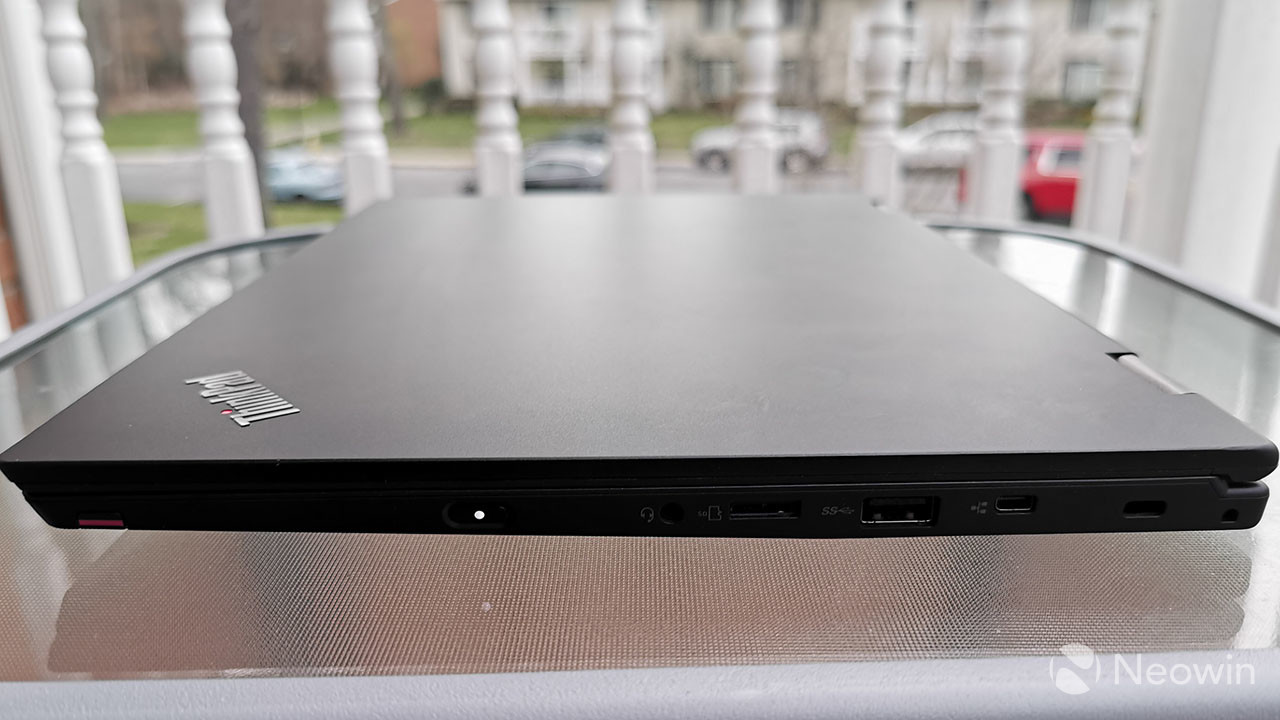 On the right side, you'll find another USB 3.1 Gen 1 Type-A port, mini Ethernet, a micro-SD card reader, and a 3.5mm combo audio jack. That's also where you'll find the power button, as is typical in a ThinkPad convertible. There's also a pen garage. 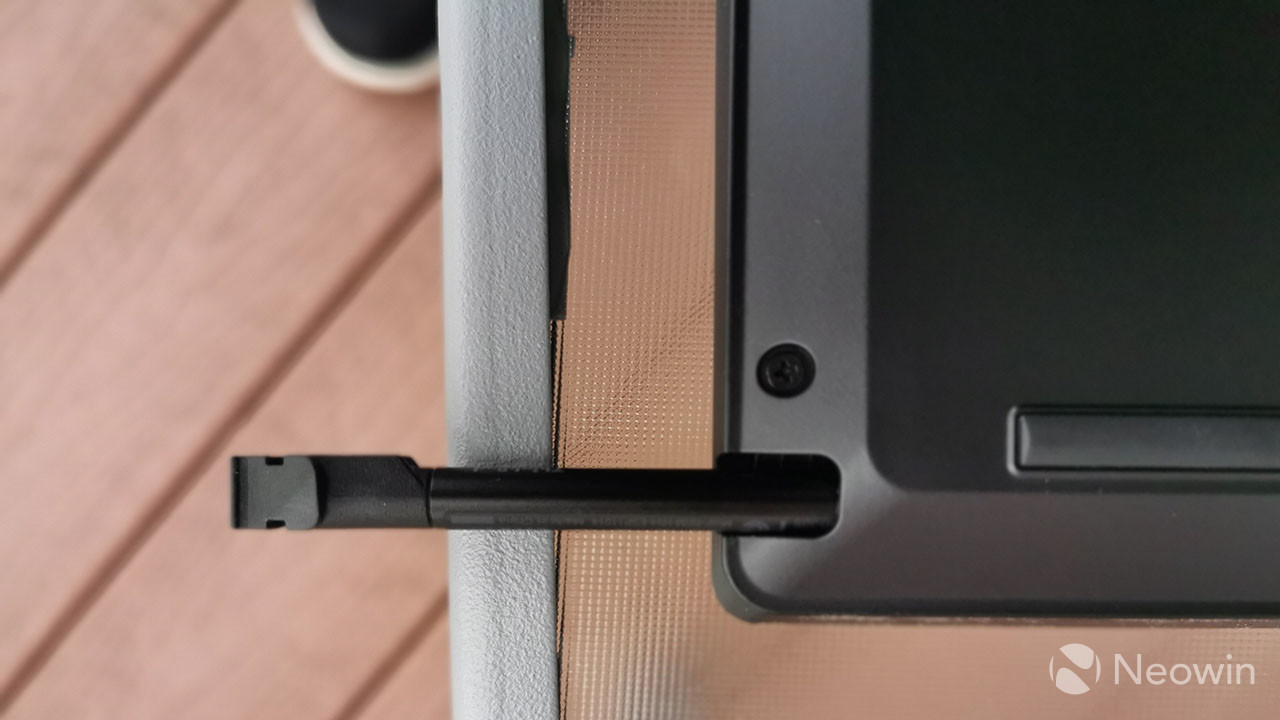 The pen garage is one of my favorite features in ThinkPad convertibles. Some PCs use magnets to attach the pen, some use a pen loop, and there are other methods. All of these have their flaws. I like the pen garage idea because the pen is always with you and it's always charged. This means that you get a smaller pen, of course. The good news is that you can use any of many third-party pens.

It's also worth noting that the L390 Yoga is a bit thicker and heavier than its premium competitors, coming in at almost three quarters of an inch thick and 3.44 pounds. If you're looking for a really light convertible, you'll want something that's under three pounds, and this is not it. 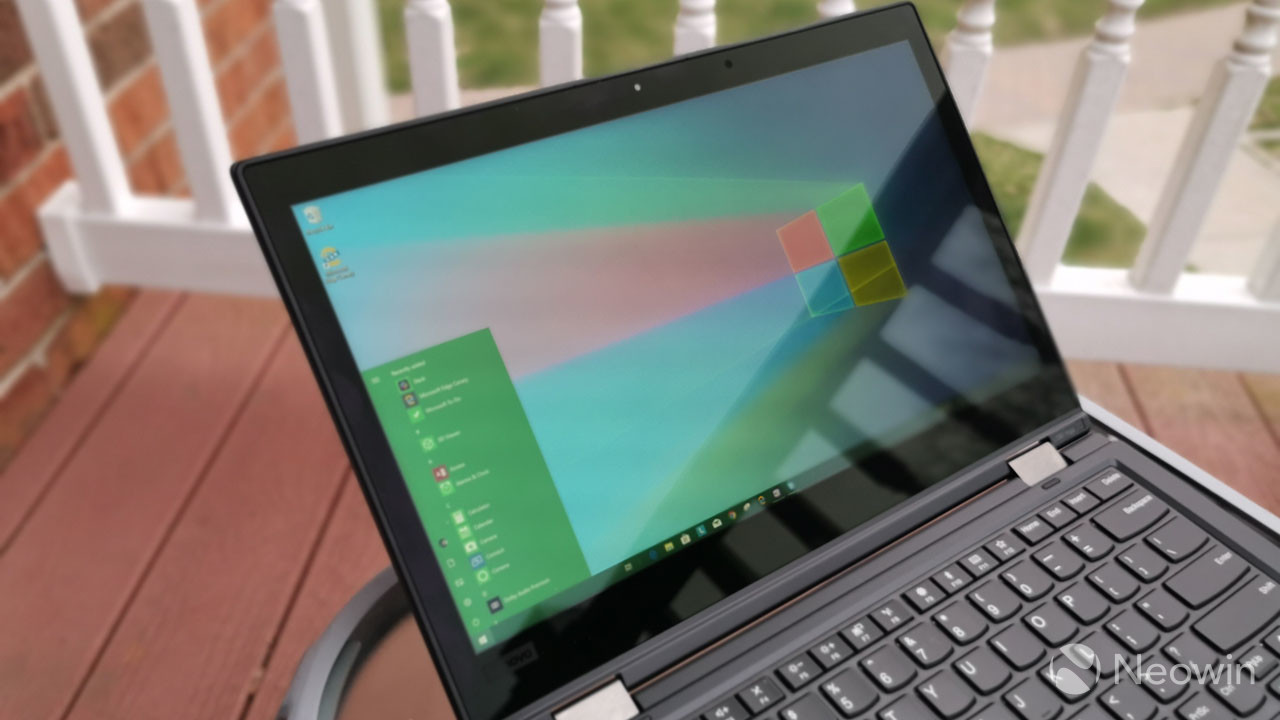 As far as things like color accuracy go, the screen is fine. It's areas like brightness and viewing angles where it falls short. The brightness of this display goes up to 300 nits, so you'll struggle to use it outdoors.

Also, the viewing angle is 170 degrees, which will be fine for most use cases. Still, it's behind the 178 degrees of more premium PCs. Ultimately, you'll be pretty happy with the screen considering the price point, although you should definitely go with 1080p rather than the WXGA base model. Those extra pixels will make a big difference.

I also want to point out that the bezels are somewhat large by today's standards. Do with that information what you will. The fact is that this year's ThinkPad X1 Yoga probably fits in a similar footprint as this machine but with a 14-inch display. That said, the L390 Yoga is much more inexpensive.

I feel like the keyboard is one of the biggest selling points of the ThinkPad L390 Yoga. Lenovo's ThinkPads have some of the best keyboards around, and you still get that premium quality when you buy a more inexpensive model. 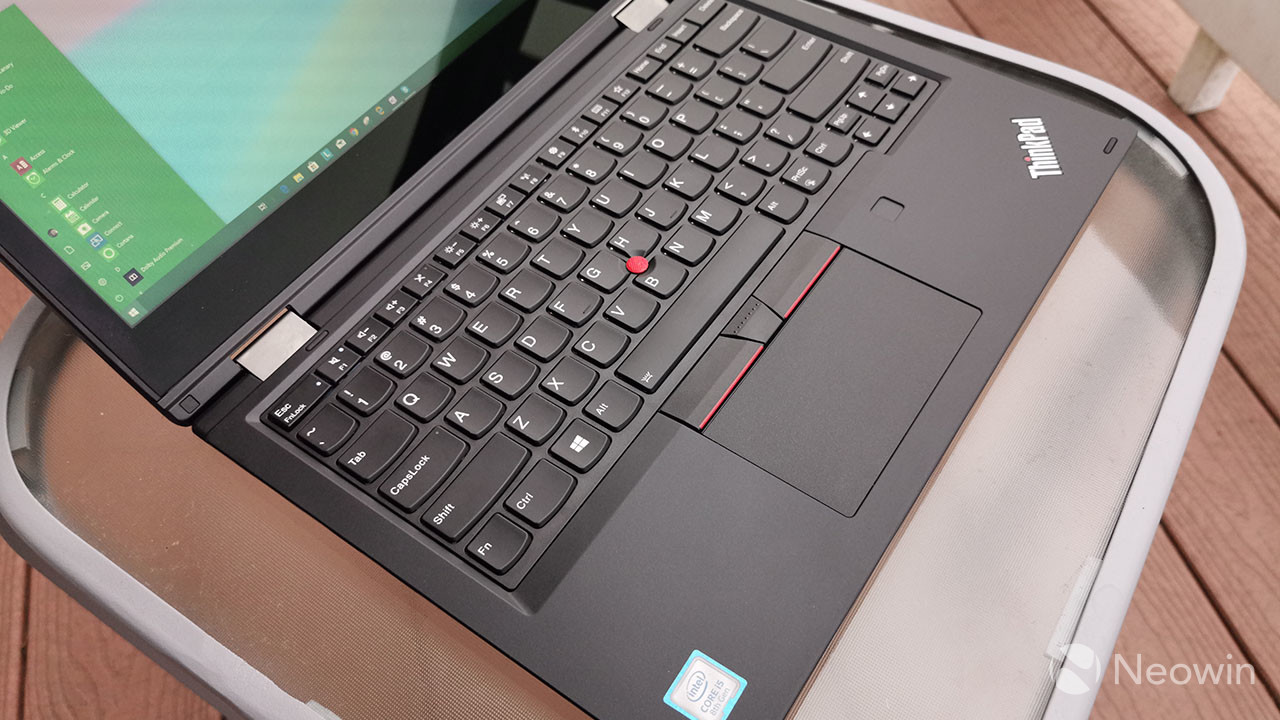 It's one of the most comfortable keyboard experiences out there, with precise keys that aren't wobbly. The closest I've seen to a keyboard this good is HP's new EliteBook x360 1040 G5, but the difference is that to get it from HP, you have to buy a laptop from its premium lineup, spending well over a thousand dollars. The point is that this is the best keyboard that you'll get at this price point, and I have no doubt about that.

The trackpad is also pretty solid, and it's the same that you'll get from any ThinkPad. There are three buttons above it, even though it's clickable. These buttons are made to be used with the TrackPoint, that little nub that sits between the G, H, and B keys.

Using the TrackPoint does take a bit of getting used to, but I like it for certain things. For example, using it with the middle mouse button is great for scrolling. It's also good for selecting areas of the screen with the Snipping Tool. Using the TrackPoint and a dedicated button for that is much easier than just using a clickable trackpad.

And if you hate it, you can just turn it off through Lenovo's Vantage app, which is also where driver updates come from. Also, and this is the only thing I dislike about ThinkPad keyboards, the Fn key is to the left of the Ctrl key. You can swap their functionality in the Vantage app as well, so the Fn key acts as the Ctrl key and vice versa.

The keyboard does not have the Lift and Lock feature that was previously available on some ThinkPad convertibles. This feature retracted the keys into the keyboard when you folded the display back and used it as a tablet, making it a more comfortable experience. Lenovo killed it in this year's ThinkPad X1 Yoga anyway, but it's worth noting that you won't find it here.

The ThinkPad L390 Yoga that Lenovo sent me includes a Core i5-8265U CPU, 8GB RAM, and a 256GB SSD. As far as CPU options go, you can get it with either a Core i3 or a Core i7 as well, both from the Whiskey Lake family. There are no vPro options available, probably because Intel hasn't announced vPro flavors of Whiskey Lake CPUs.

You can also have it configured with up to four times more RAM than this unit, which is pretty solid. Indeed, with a Core i7-8565U and 32GB RAM, this thing would easily handle everything you throw at it.

But for this model, it's just OK. For those general productivity tasks, it does just fine. I wouldn't recommend going into playing games or editing videos, as it definitely starts to choke. If you opt for higher-end specs, you'll be able to do those things in a pinch though.

I didn't run into any trouble with my general workflow, which included things like typing in a browser, using OneNote, and having Skype and Slack always running in the background. The L390 Yoga handled all of those things just fine. Ultimately, if you need more than a Core i5 and 8GB RAM, then you probably already know why.

As you can see, it performs well, but not as well as a Core i7 machine. Next up is the Creative test, which checks more GPU-intensive tasks like video editing and mainstream gaming. 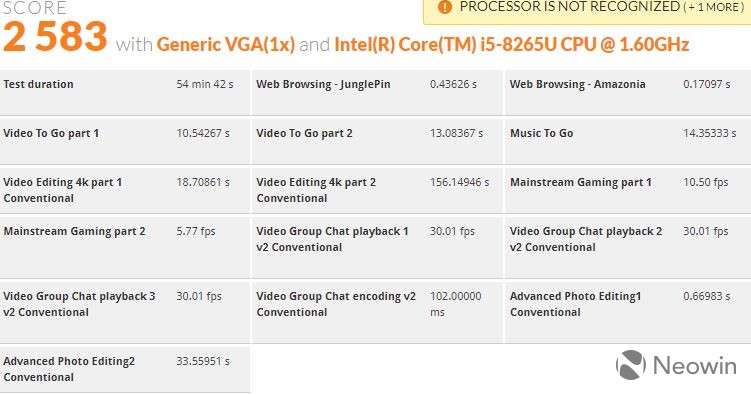 Obviously, the ThinkPad L390 Yoga didn't do very well on the Creative test. Again, this is no surprise. Finally, the Work test focuses on productivity-related tasks like writing and spreadsheets.

Surprisingly, the Work test was where this PC performed poorly. I'd have expected it to do better. I also ran a general test in PCMark 10.

The benchmarks show what you can expect from a Core i5-8265U and 8GB RAM. If you want more from it, go for the Core i7.

The Lenovo ThinkPad L390 Yoga isn't the best laptop in the world, but you're also not paying best in the world prices for it. And the price is what I love about it. As I mentioned in the introduction, the ThinkPad X1 Yoga is one of my favorite convertibles. The L390 Yoga takes some of the best elements of it and puts them in a more inexpensive package. 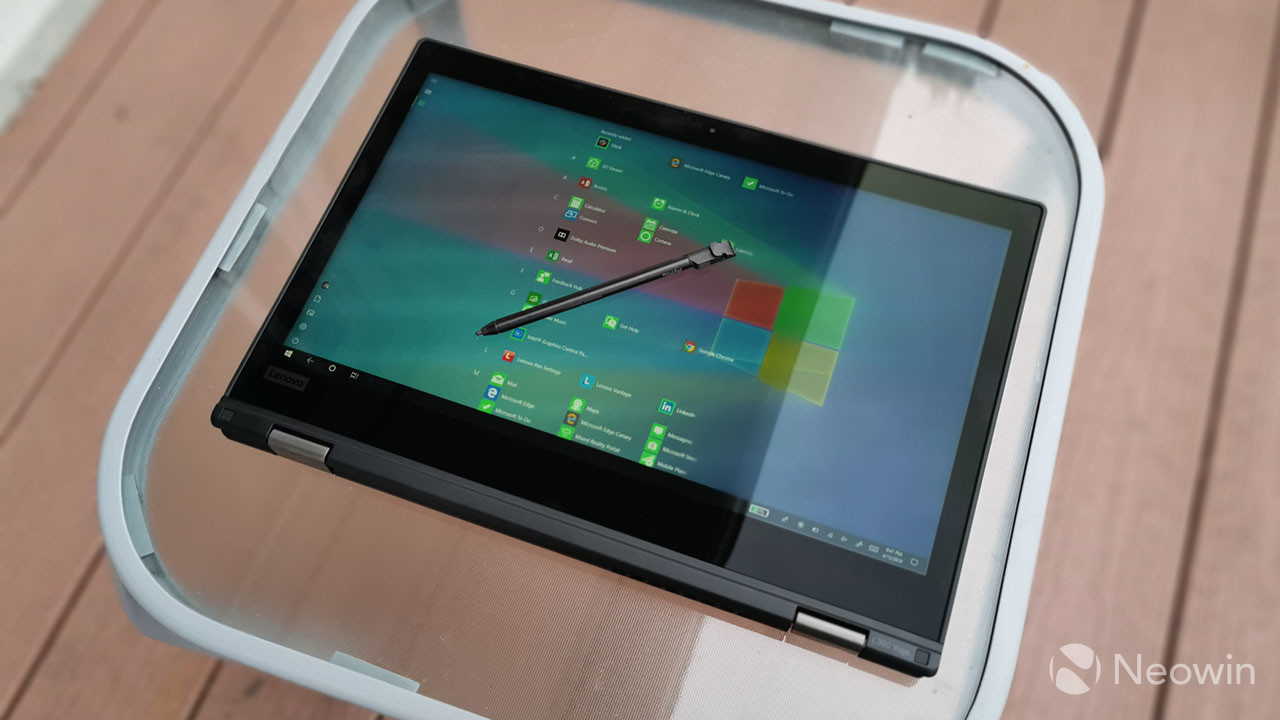 Like all ThinkPads, it has the one of the best keyboards around, and it has a built-in pen garage. Pop the pen out and you can use all of the Windows Ink features that are available, such as taking handwritten notes, drawing, writing on photos, and more.

It's a bit thicker, and a bit heavier, but this thing costs under $900. For that price, you really can't beat what you're getting. 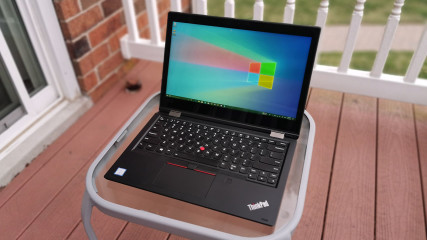 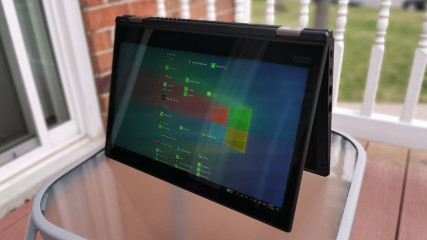 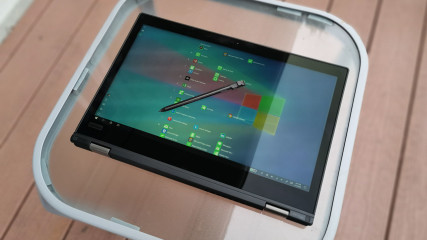 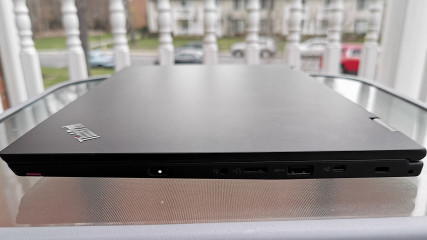 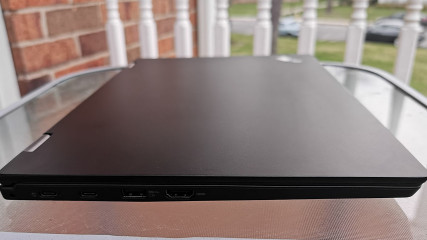 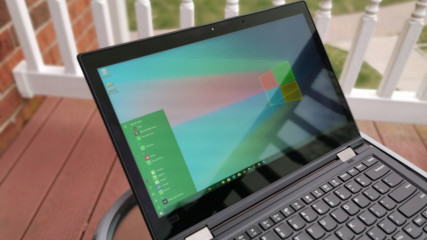 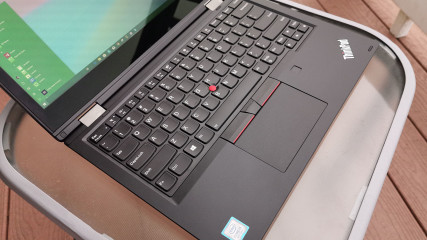 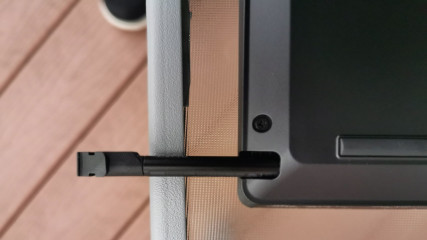 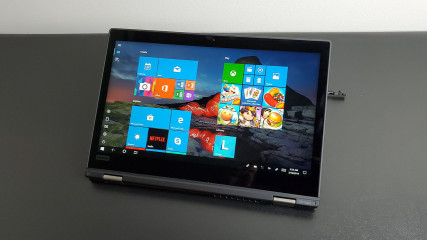