Last week, I reviewed the Lenovo ThinkPad P72. At the time that Lenovo sent me that unit, it also offered to send me the P52, and while it has a similar use case, I accepted it because there are some notable differences. The P52 is smaller, with a 15.6-inch screen, making it more portable.

That screen supports touch as well, something that's not an option on the P72. Also, the unit that Lenovo sent me includes a Core i7-8850H CPU, while the P72 has an Intel Xeon. Naturally, I thought it was worthwhile to test out both of them.

The ThinkPad P52 is a beat of a mobile workstation, with Nvidia Quadro graphics, a 4K display, 16GB RAM, and more. Read on for more.

The Lenovo ThinkPad P52 is big and it's bulky, but it's powerful. It comes in at just under an inch thick, and it weighs over five pounds. As always though, that's the price of power. If you want thin, light, and ultra-portable, get an ultrabook. This is a mobile workstation, for those that want power. 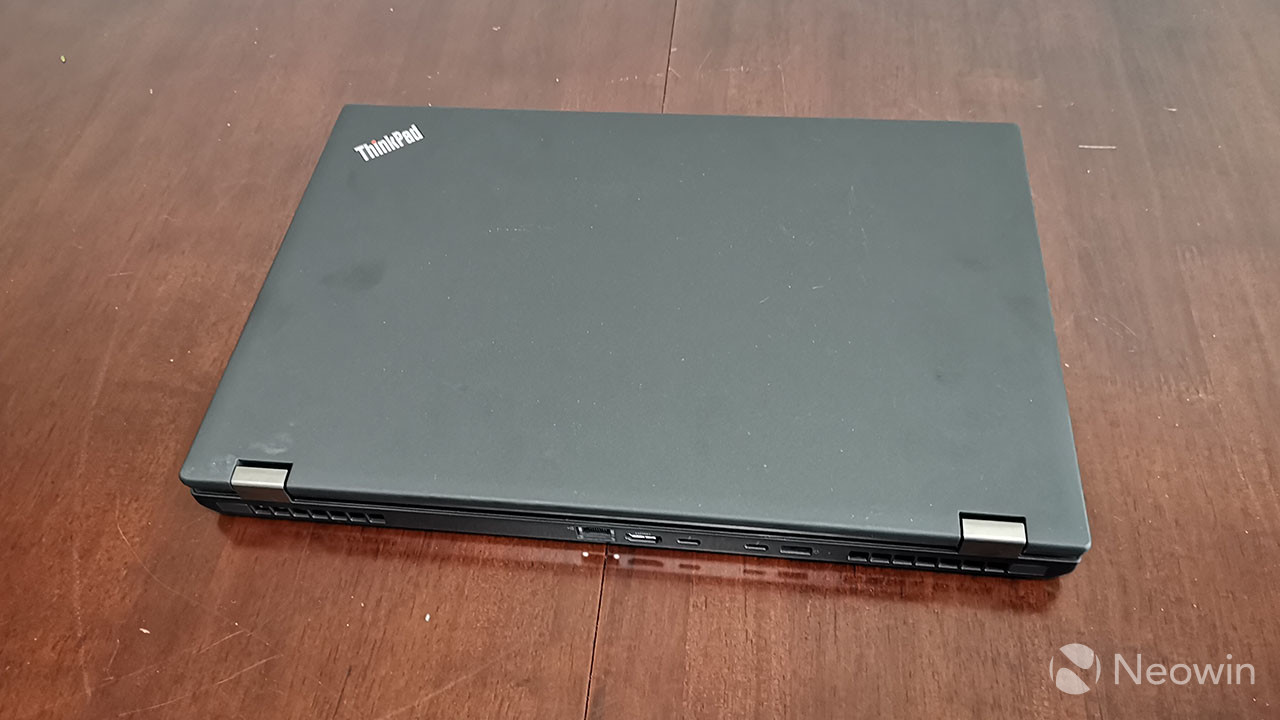 The base is made of magnesium and aluminum, while the display cover is made from glass fiber reinforced plastic. The really good news is that it's MIL-STD 810G certified, so like all ThinkPads, it's built to be tough. This is particularly notable, because I assume that if you spend over seven thousand dollars on a laptop, you want it to last for a while. Well, maybe you got it like that; I don't know.

As Henry Ford once said, you can have any color you want as long as it's black. Lenovo has mixed things up a bit, now offering two different shades of black on ThinkPads. This is the older shade, also including the older silver ThinkPad logo. So it's black, but not blackest. It also maintains the silver-colored hinges that we've seen in previous years. 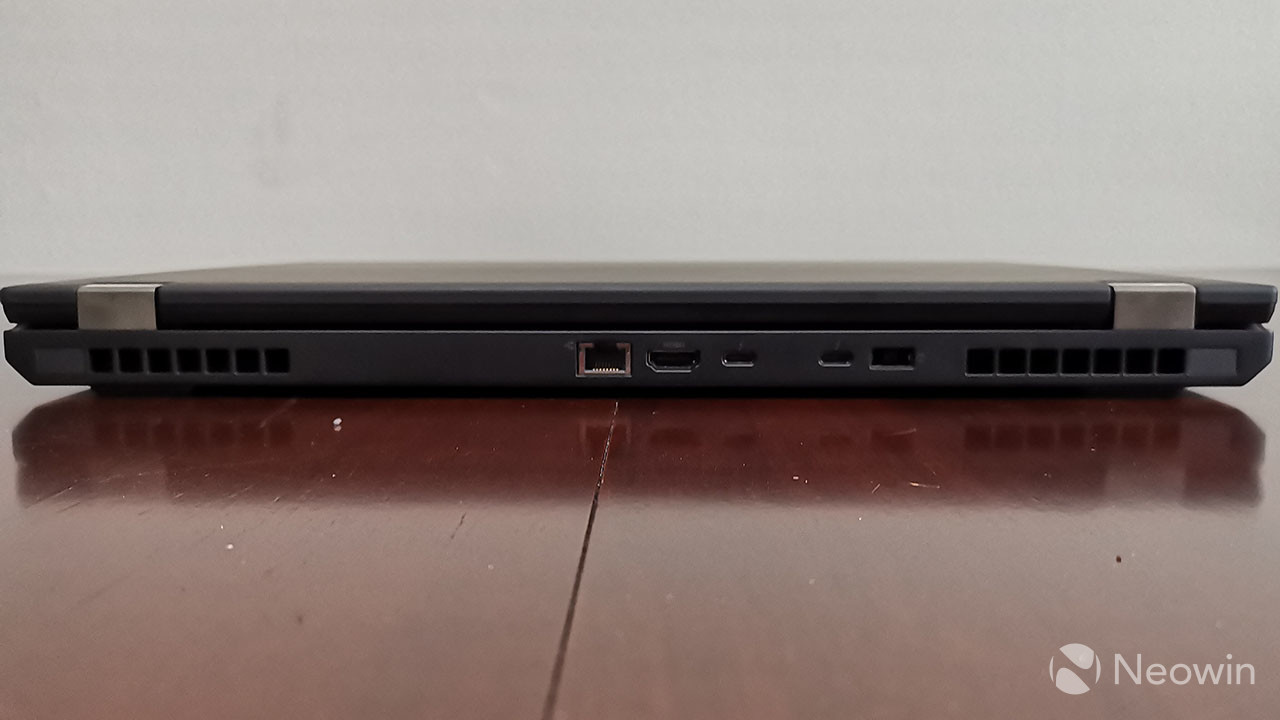 Just as you'd expect from a mobile workstation, this thing is loaded up with ports. On the back of the machine, you'll find two Thunderbolt 3 ports, capable of delivering speeds of up to 40Gbps. There's also the port for Lenovo's proprietary charging cable, which is 170W. You'll also find Ethernet and HDMI back there. 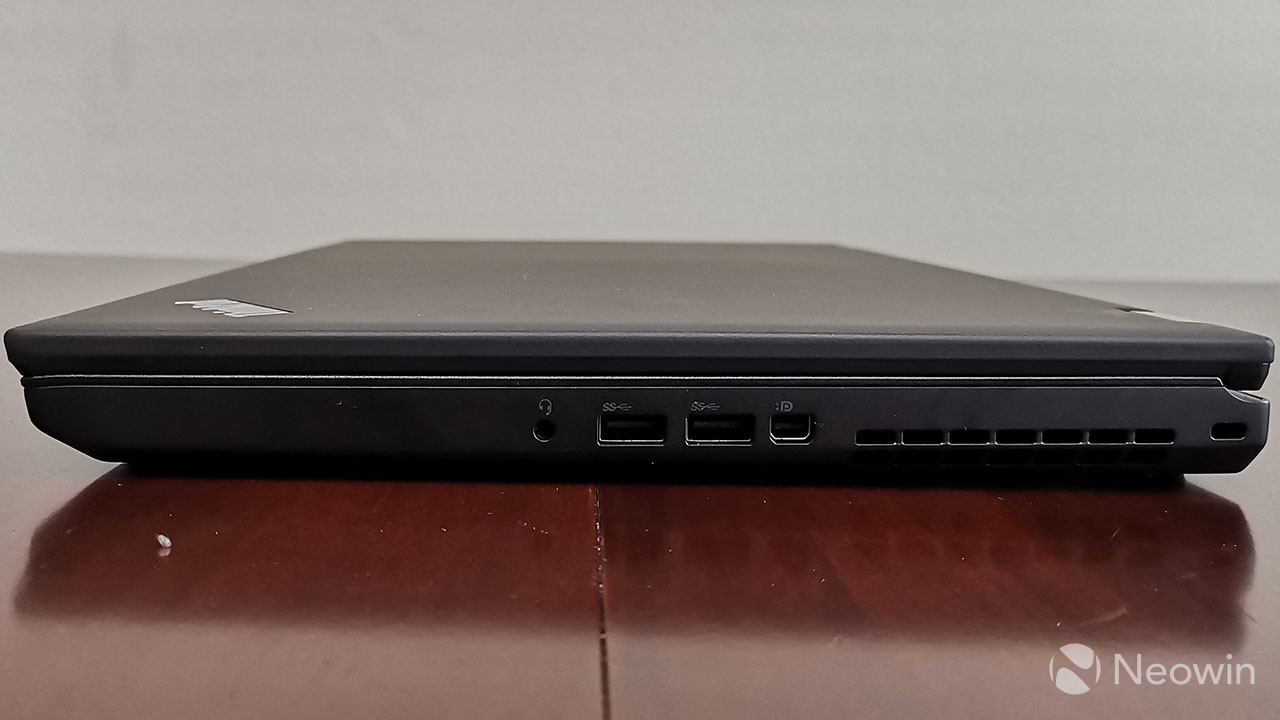 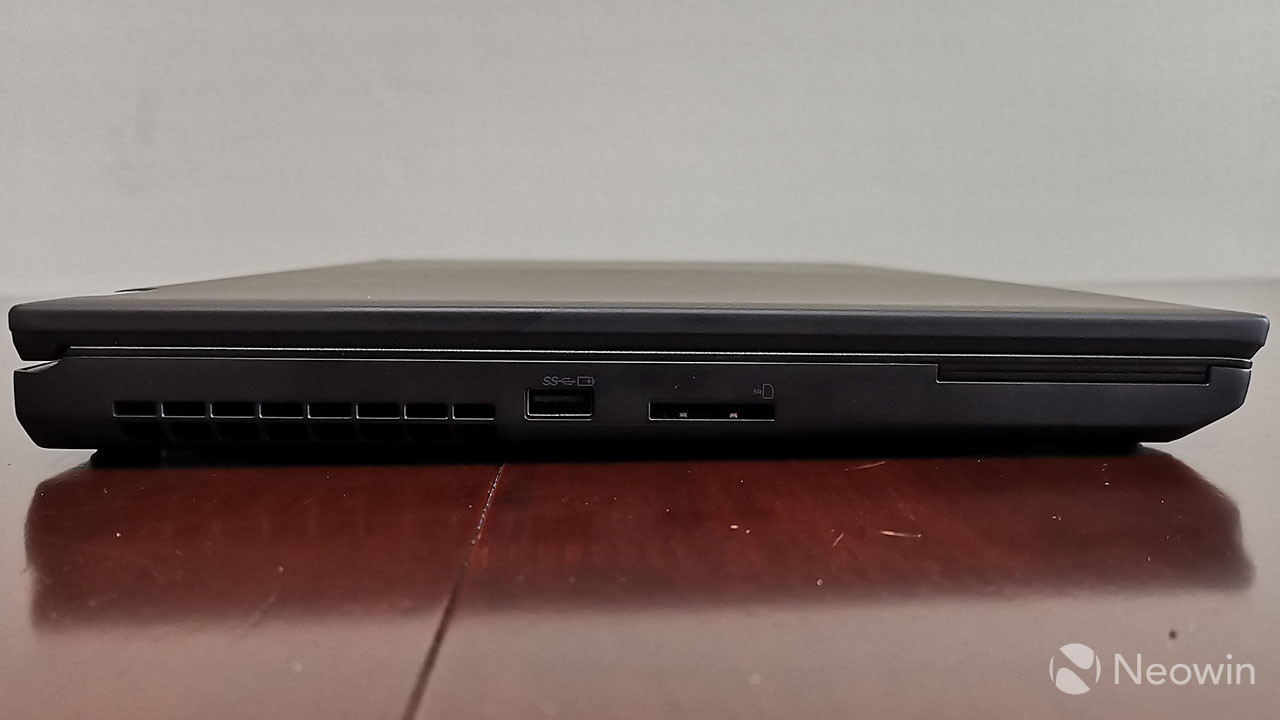 For Windows Hello, this machine comes with a fingerprint sensor below the keyboard and an IR camera above the display., so you have your choice in biometric authentication. I prefer facial recognition, because I think it's more natural on a laptop. Also, while ThinkPads have had fingerprint sensors for many years now, they're somewhat mediocre. 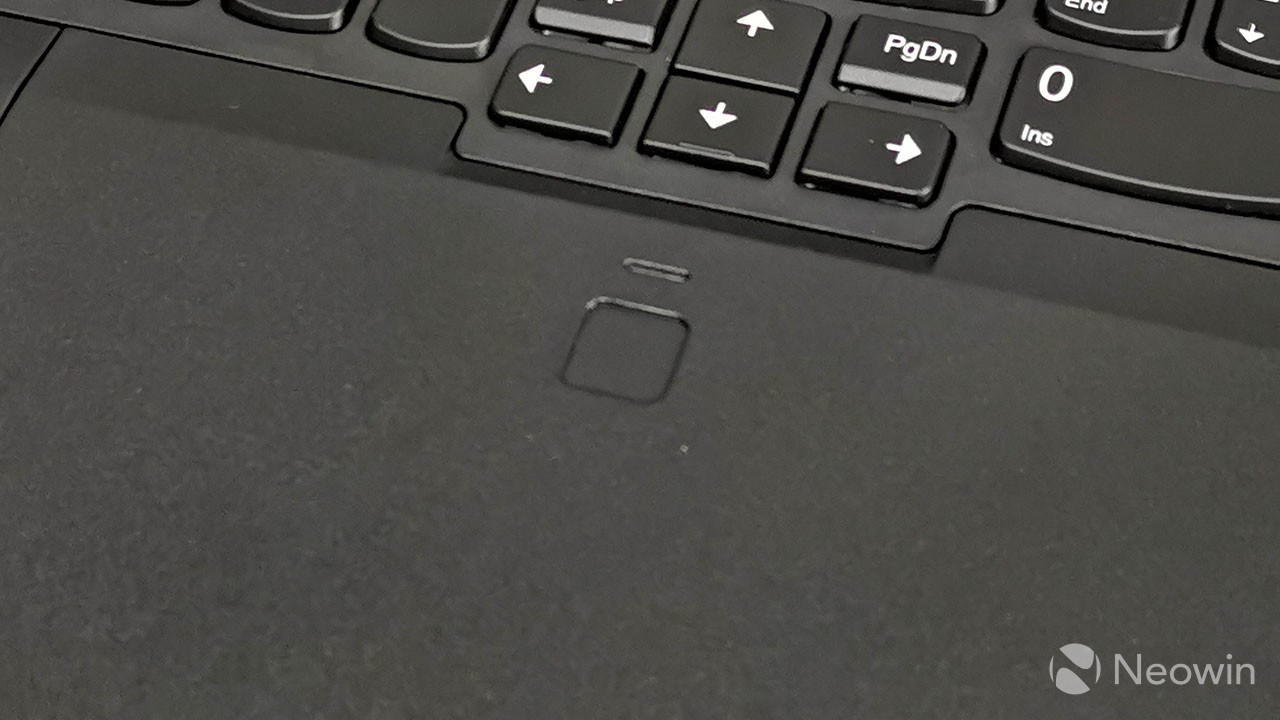 Above the keyboard, you'll find speakers that fire right up at you, powered by Dolby Audio Premium. It's all very similar to the ThinkPad P72, but it's in a smaller package. 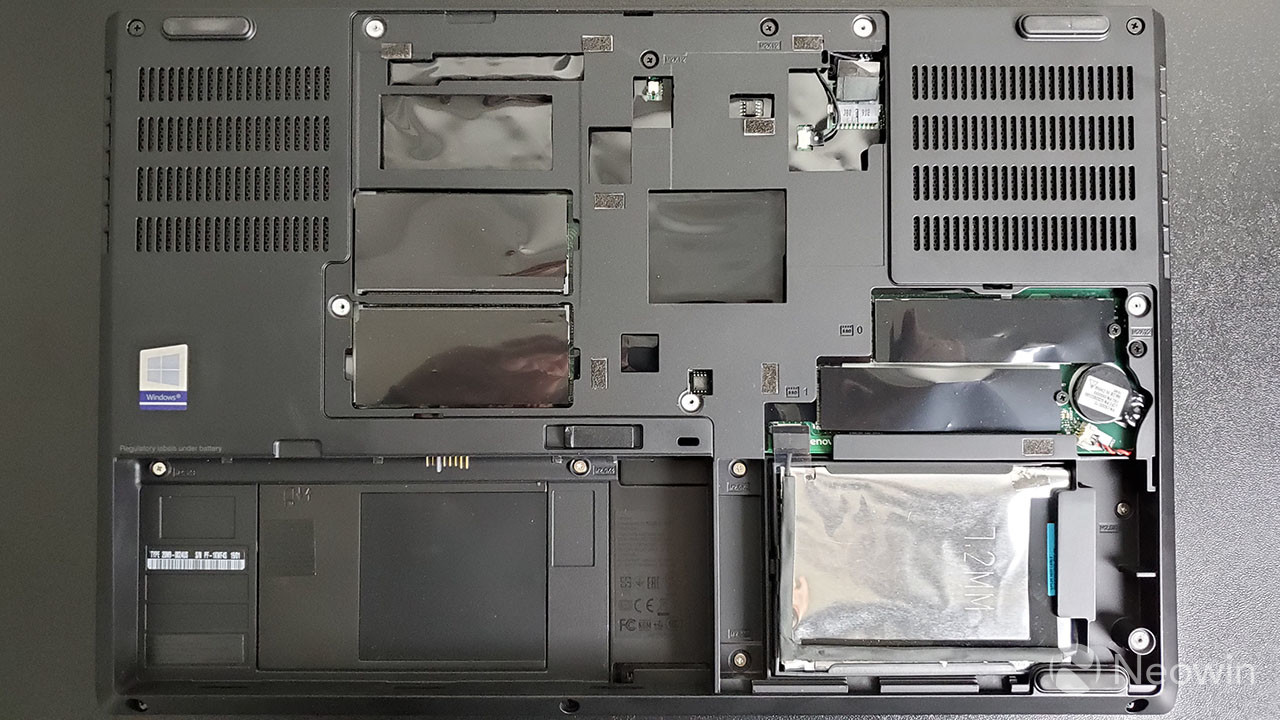 The battery is removable on the P52, which was not the case on the P72. Also, the bottom panel can be removed easily with six Philips-head screws, revealing the internals.

The ThinkPad P52 includes a 15.6-inch UHD touchscreen, and it's significantly different from the 17.3-inch UHD display that's in the P72. Unlike the matte anti-glare screen on the larger model, this includes a glossy touchscreen. Note that if you choose the 1080p model, that does not support touch and it's anti-glare. 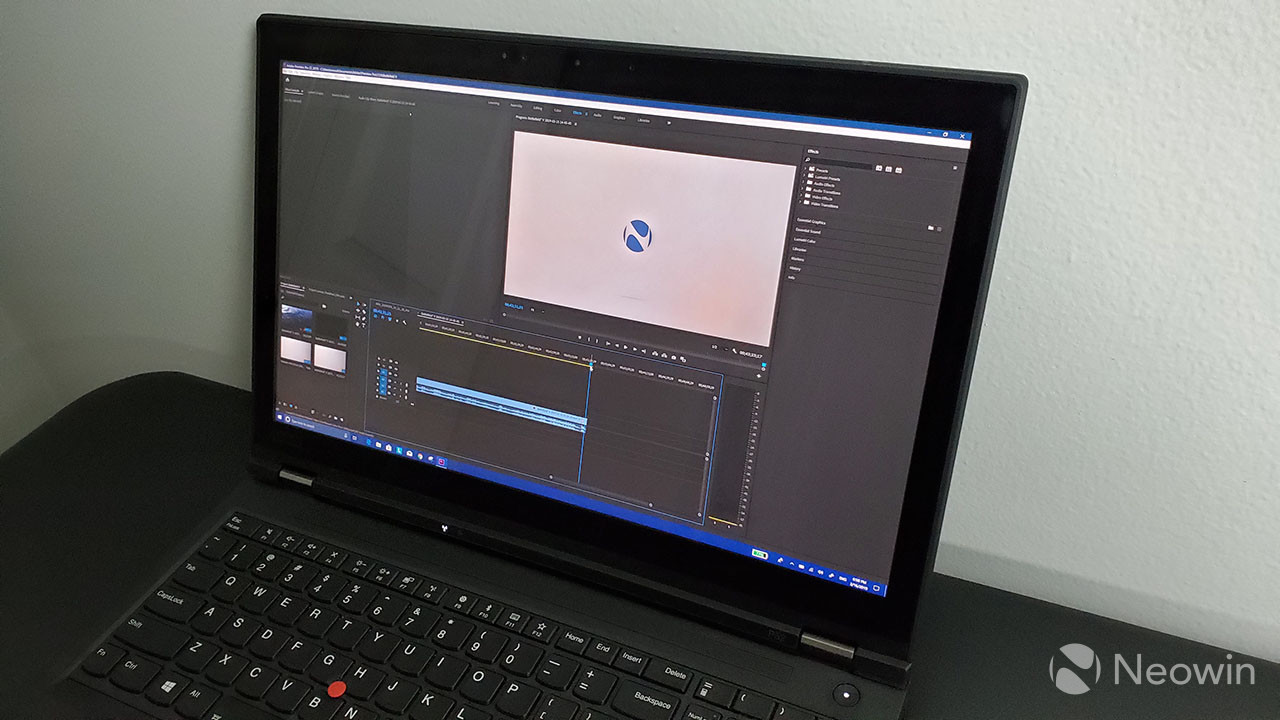 I really can't tell you which one is better for you. Anti-glare screens are nice because you can use them in bright lighting conditions. Glossy screens are prettier. It really depends on the kind of work you're doing, and you know that better than anyone else.

The P52 doesn't use one of Lenovo's Dolby Vision displays, which is what the company has been pushing in its premium ThinkPads. Still, it supports 100% Adobe color gamut, and it looks great. 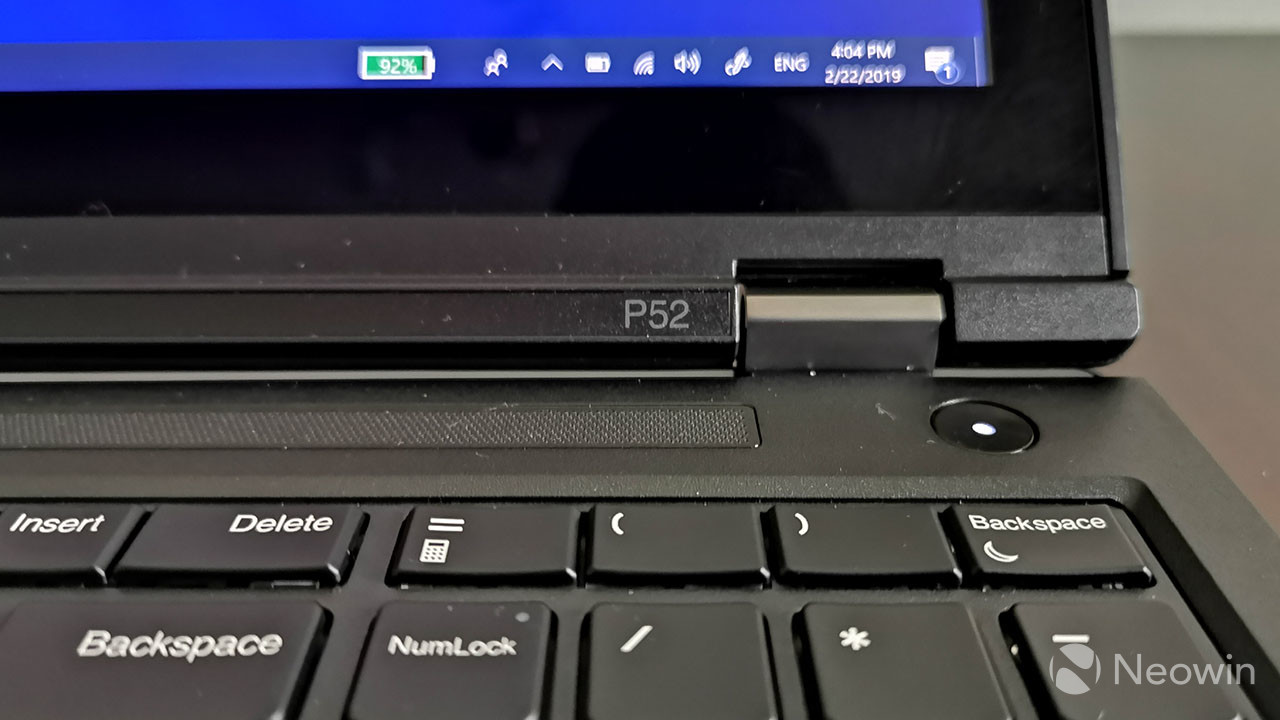 Audio quality is pretty good as well, although it's no Dolby Atmos. It's definitely functional though; for example, if you're using this PC to edit videos like I did, the audio quality is clear and loud enough to do a good job.

One thing about the display that I'll note is that the bezels feel like their a bit too large. With today's trends toward shrinking bezels - like Lenovo did in the 15-inch Legion Y740 gaming laptop - it would have been cool to see the P52 come with a smaller footprint.

Lenovo's ThinkPads are renowned for having some of the best keyboards around, and the ThinkPad P52 is no different. There's something about it that makes it really comfortable to type on but also really precise. I will say though, that while ThinkPads have the best keyboards, HP's new EliteBooks are coming really close. 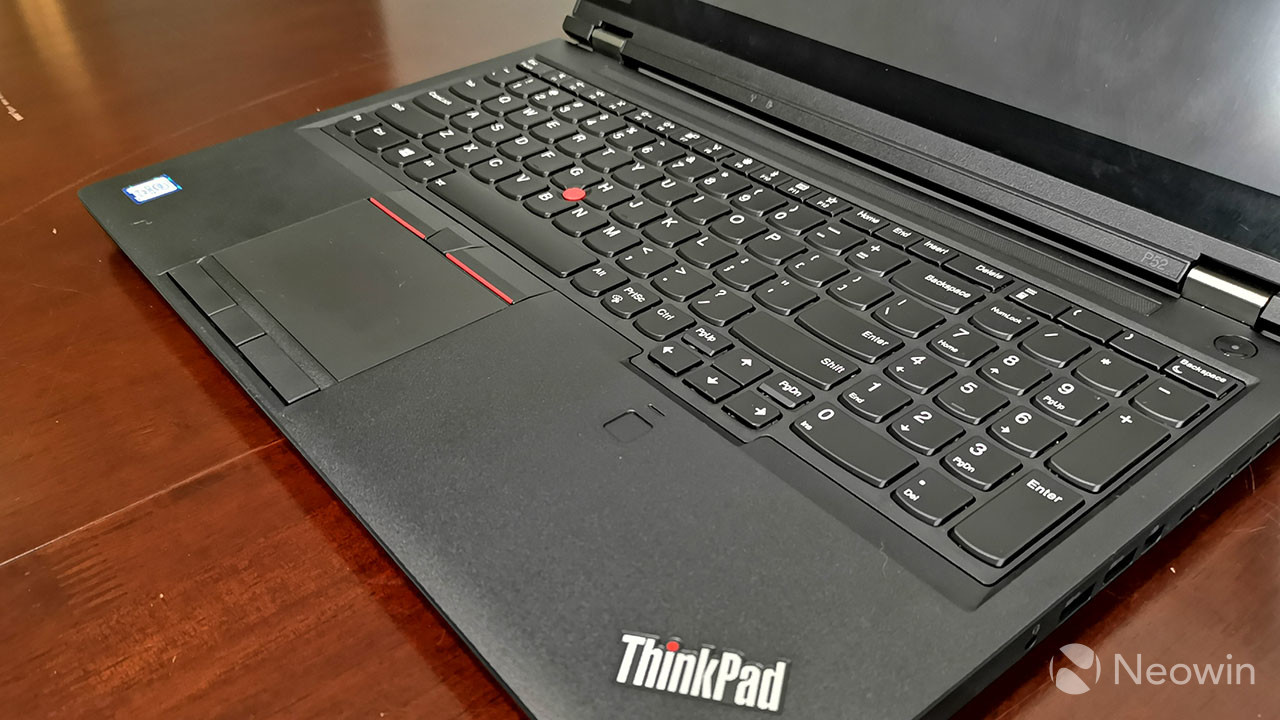 The palm rest around the keyboard is glass fiber reinforced plastic, so you don't get that soft and cool feel you'd get from the carbon fiber devices. Still, while that would be a nice touch, the keys are what's important. There's a number pad to the right of the main keyboard, which feels a bit odd on a 15.6-inch device. Like the bezels that I pointed out earlier, I'd gladly sacrifice the number pad for this device to have a smaller footprint.

The trackpad is not clickable, as was the case on the ThinkPad P72. There are two sets of physical buttons that do the exact same thing, one above the trackpad and one below it. While all ThinkPads have the buttons above the trackpad, I was surprised at how quickly I became accustomed to using the ones under it. The top buttons are really made for use with the TrackPoint, that little red nub that sits between the G, H, and B keys. Still, I'd rather just have a clickable trackpad. 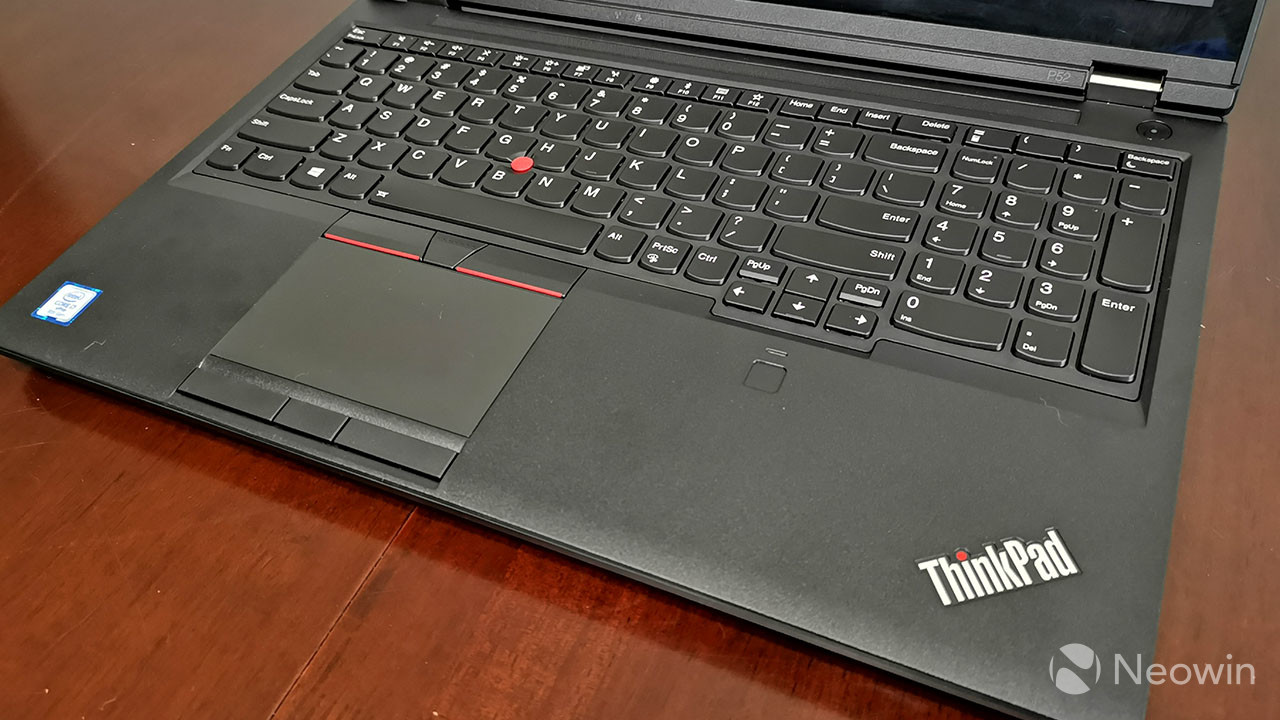 Oddly, Lenovo still places the Fn key to the left of the Ctrl key, something that's pretty much universally hated but is included on all ThinkPads. Luckily, you can swap the functionality of Fn and Ctrl in the Lenovo Vantage app, and that's something I do on every ThinkPad as soon as I get it.

The Lenovo ThinkPad P72 includes an Intel Core i7-8850H CPU, which is a Coffee Lake chip that has a 45W TDP, six cores, and 12 threads. It's about as high end as you can get from the Core series unless you get a Core i9, which is not offered. The H-series is what you'll find in any powerful device, including gaming laptops.

For graphics, we have the Nvidia Quadro P3200 with 6GB GDDR5. There's good and bad news here. I used this machine for editing a lot of video, and it works great. The bad news is that Quadro RTX is coming at some point.

Nvidia's new Turing architecture is a huge jump from the previous one. GeForce RTX GPUs are available for both desktop and mobile, and Quadro RTX graphics cards are available for desktop, offering features like ray tracing and deep learning super sampling. The truth is that you might want to hold off for a bit before buying a mobile workstation, because it seems likely that the next generation will have Quadro RTX.

But if we're living in today, the ThinkPad P52 is a great machine. The GPU isn't as powerful as the 16GB P5200 that's found in the P72, but it definitely gets the job done. My test is always editing video in Adobe Premiere Pro while compiling another video in Media Encoder. I did feel some lag and stuttering, but it was fine.

As far as battery life goes, you'll get four or five hours of general use out of the P52. Obviously, that will start to drop considerably when you start to do tasks that require more power. The P52 comes with a 170W power adapter, so it consumes less power than the P72, which shipped with a 230W power adapter.

The score is right about where you'd expect it to be. The next test is Creative, which checks more GPU-intensive tasks like video editing, mainstream gaming, and so on.

The Creative test is where the P52 really shines, because these are the types of tasks that this machine was engineered for. Finally, the Work test checks productivity-related tasks like writing and spreadsheets.

As you can see, this machine doesn't do quite as well on the Work test. Despite having powerful internals, a common ultrabook with a 15W U-series processor will outperform the P52 on these types of tasks.

I also ran PCMark 10, which provides an all-in-one test.

Below you'll see that I listed three cons for the ThinkPad P52. Two of them are battery life and that it's thick and heavy. These are things that you really can't get around when it comes to a powerful machine like this. In fact, it's actually a lot more manageable in terms of portability than the even larger ThinkPad P72. It also has much better battery life, mainly because of the less powerful GPU. 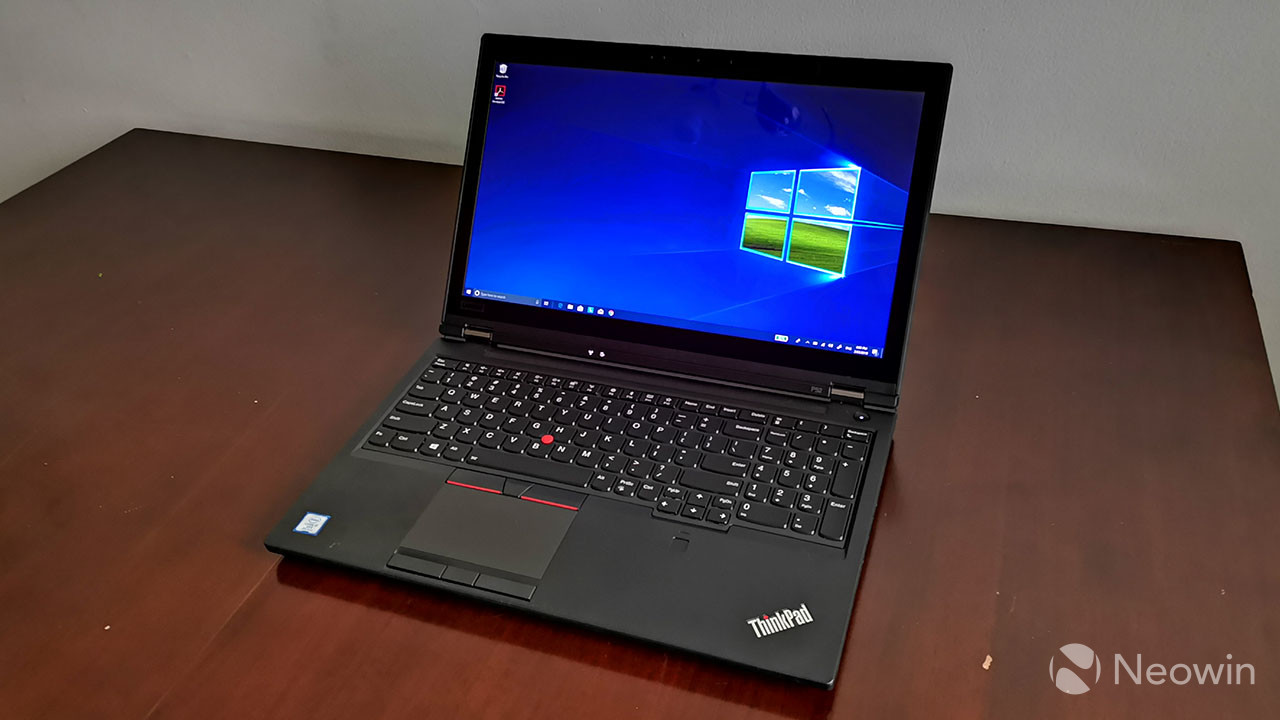 The biggest con though is that Quadro RTX is coming at some point, and it will be worth the wait. It's hard to recommend spending this much on a mobile workstation knowing what comes next.

So the real question is if you need a mobile workstation today. If you do, then the ThinkPad P52 is a great choice, as are all ThinkPads if they fit your particular use case. It has powerful internals that can be configured with up to a Core i7-8850H CPU or Xeon E-2186M, Nvidia Quadro P3200 graphics, 128GB RAM, and a total of 6TB of storage. It also has a beautiful 15.6-inch 4K touchscreen, or you can get it in 1080p for better battery life.

Again, if you really need a mobile workstation today and a Quadro P3200 suits your needs, you really can't do better. You can check out the ThinkPad P52 on Lenovo.com here. 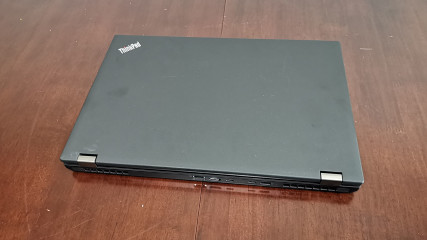 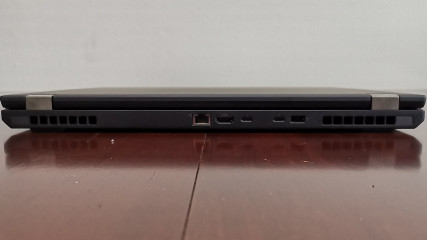 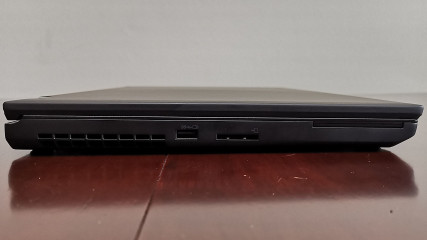 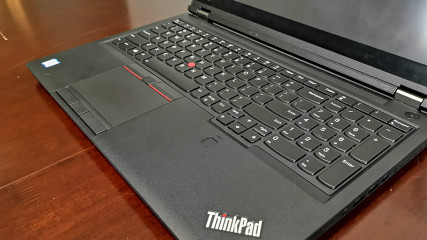 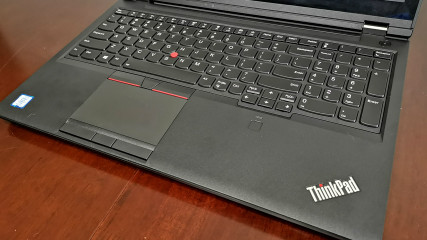 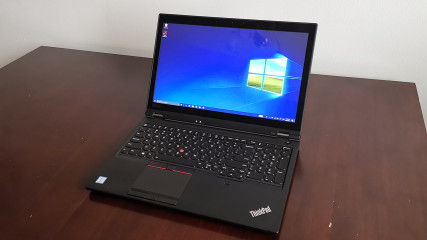 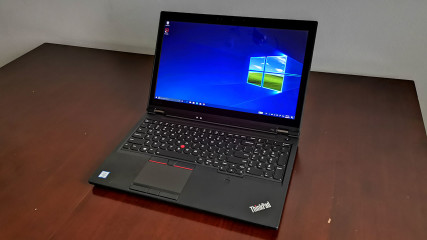 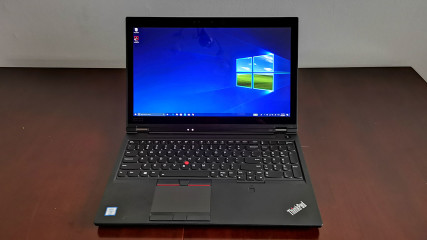 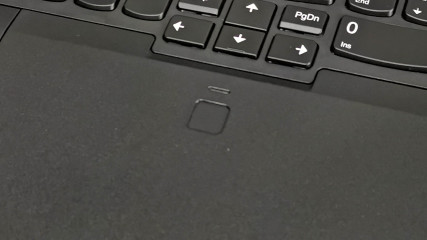 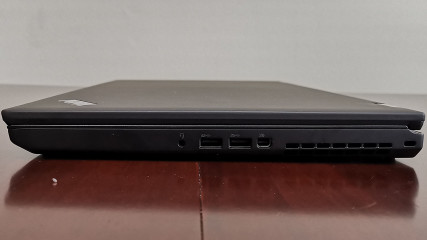 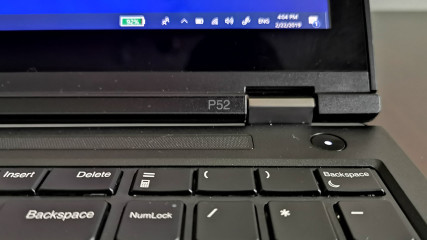 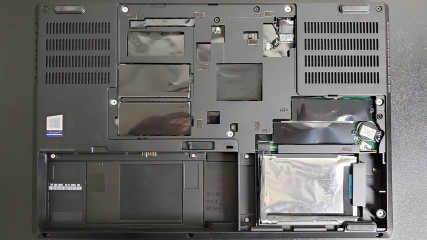 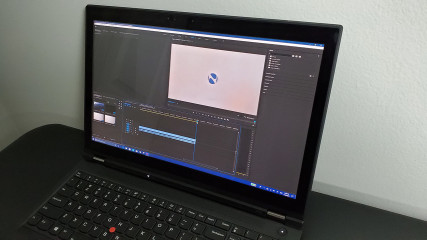