There's more than one reason I'm excited about the Lenovo ThinkPad X12 Detachable. The first was that when it was announced back in January, it was the first new ThinkPad tablet since 2018, back when there was a ThinkPad X1 Tablet. Yes, it's interesting to me that Lenovo brought back the form factor; after all, there was presumably a reason it was killed off in the first place.

The other thing that makes me excited is this new crop of ThinkPads that we have right now. The ThinkPad X1 Nano that I reviewed recently weighs in at under two pounds, and then the ThinkPad X1 Titanium Yoga does the same thing for convertibles. Both of those laptops, along with this tablet, seem to be part of a trio of thin and light ThinkPads from Lenovo that are doing things that we've never seen before. Yes, we've seen Intel-based laptops that are under two pounds. No, they've never been good. Now they are.

The ThinkPad X12 Detachable uses a new family of 11th-gen processors from Intel that's the successor to the Y-series. Not only is the CPU more powerful, but it comes with Iris Xe graphics that power a 12.3-inch 3:2 FHD+ display.

Obviously, there are a lot of similarities to Microsoft's Surface Pro here, right down to the size of the display and the magnesium alloy material. Naturally, the ThinkPad X12 Detachable only comes in black, and it's actually 15g lighter than the Surface Pro 7. The chassis is a bit larger though. 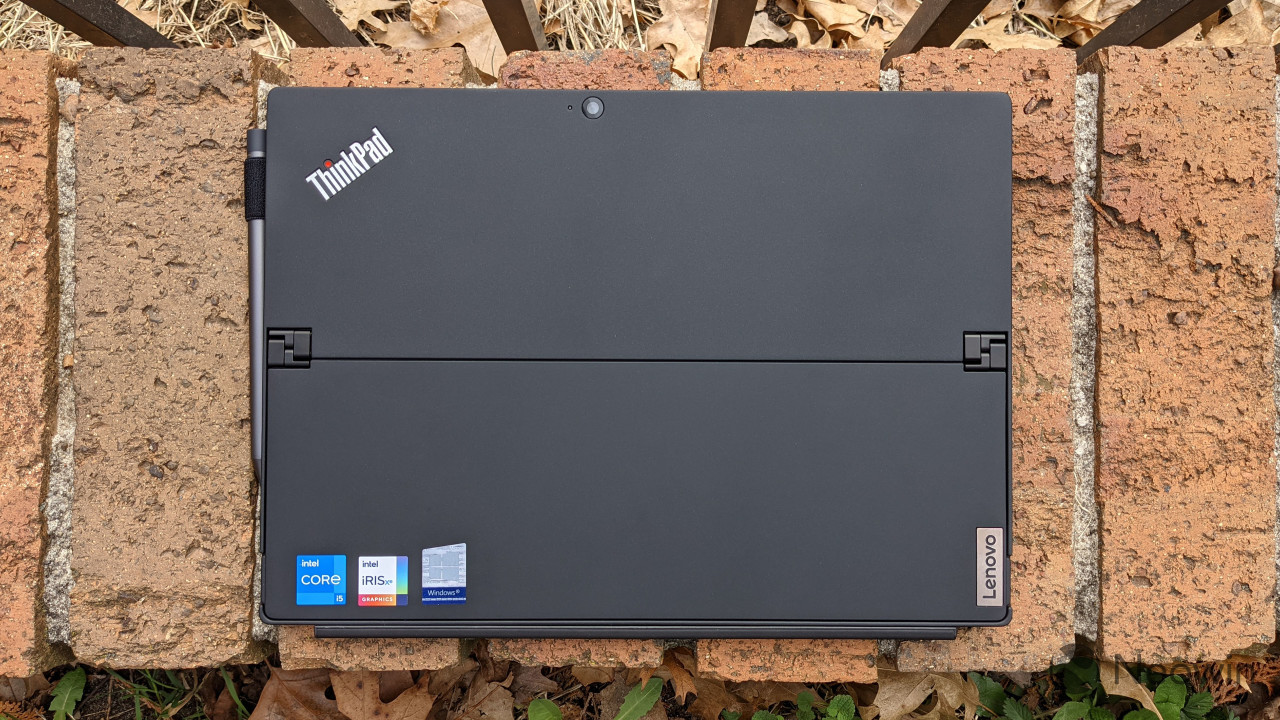 It has the same style kickstand that we've seen on the Surface Pro, with a hinge in the middle and opening outward. In fact, the second-gen ThinkPad X1 Tablet from 2017 actually did the reverse, having a hinge at the bottom and a kickstand that actually came down. It caused all kinds of problems and this is the superior design. 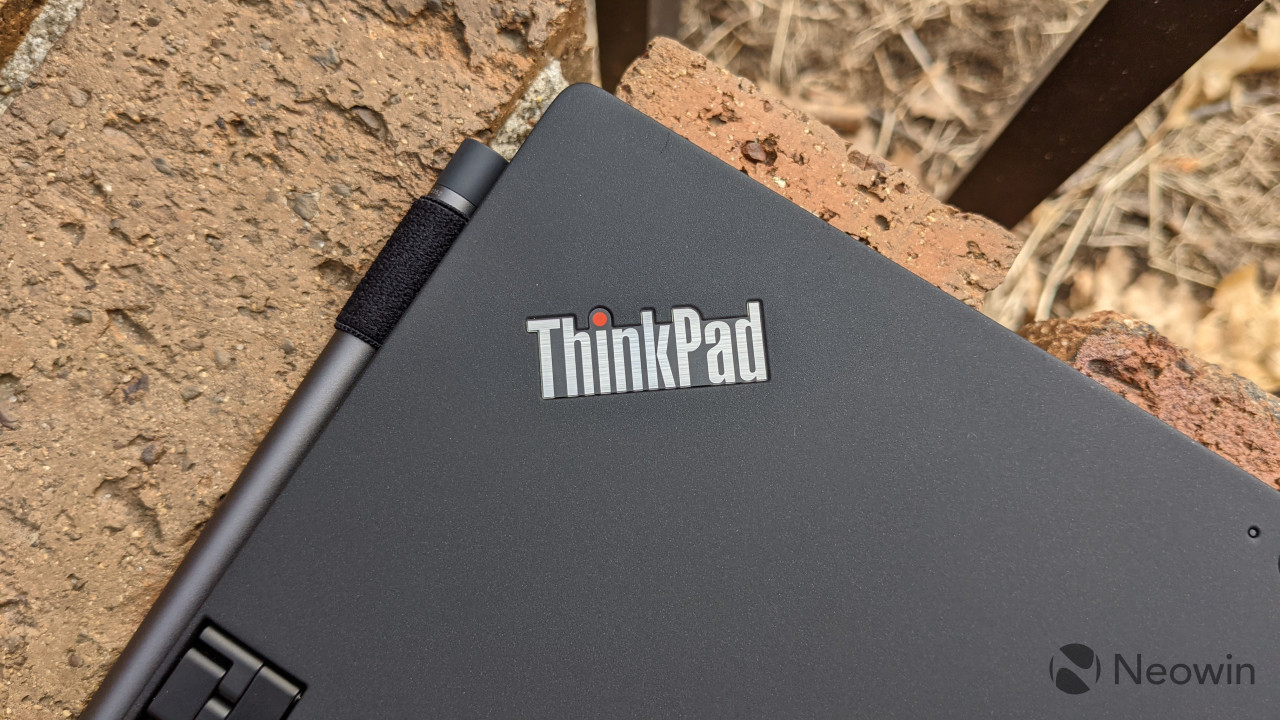 In the corner is the familiar ThinkPad logo, and it's the silver one that's not on premium ThinkPads. I'm still a bit surprised that this isn't a new ThinkPad X1 Tablet, because it does very much feel in the same family as the ThinkPad X1 Nano, except for how it's actually got a smaller and lower-resolution screen than the last X1 Tablet. 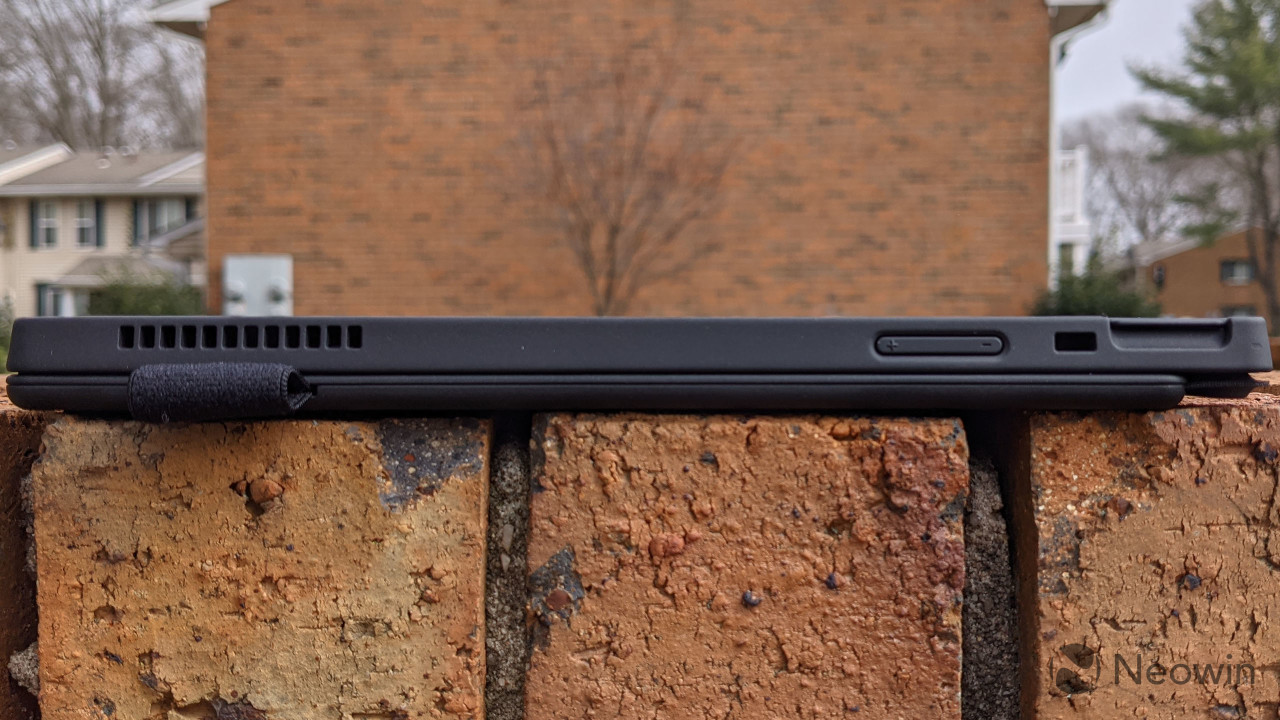 The ThinkPad X12 Detachable comes in at just 8.8mm thin, or 14.5mm thin with the keyboard attached. On the right side of the device, there's a volume rocker, while the power button is placed on top. 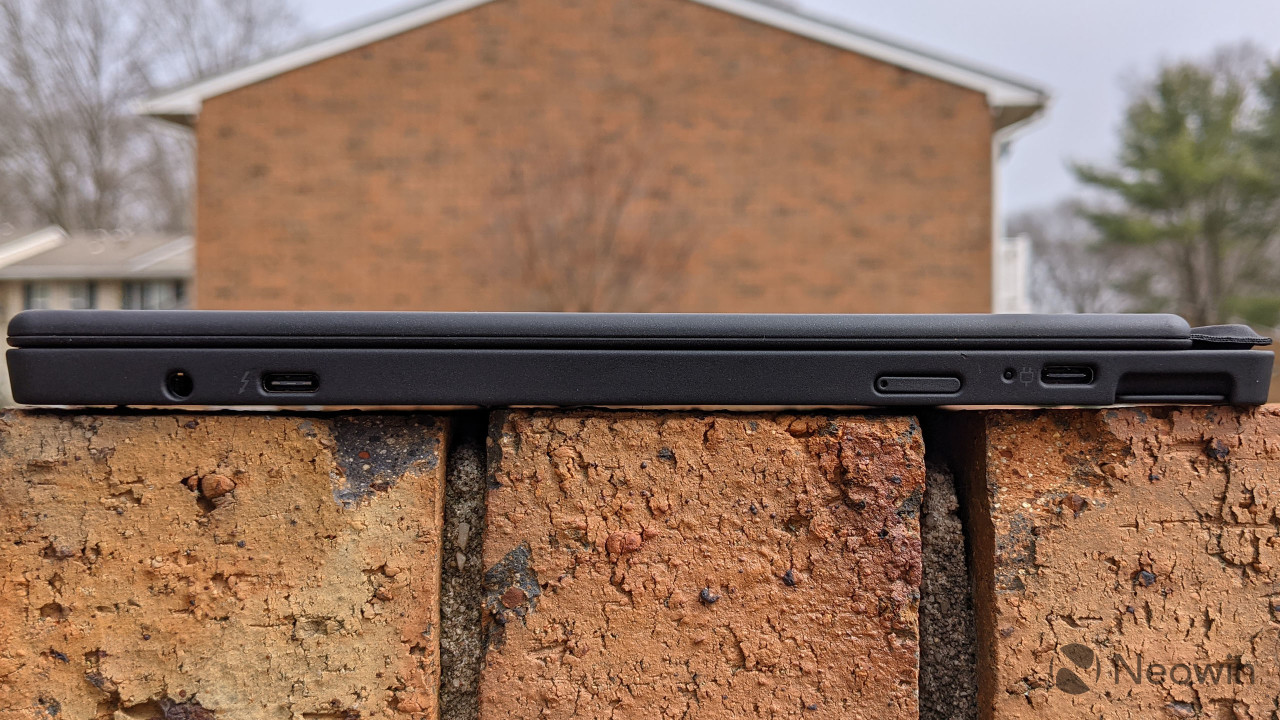 Both USB ports are placed on the left side of the PC. They're both USB Type-C, but they're not equal. The one on top is a Thunderbolt 4 port, meaning that it gets 40Gbps data transfer speeds, and can handle things like an external GPU or dual external 4K monitors. The other one is USB 3.2 Gen 2 Type-C, meaning that it gets 10Gbps data transfer speeds. You'll also find a 3.5mm audio jack and a nano-SIM slot. Usually, when you don't get the cellular configuration, Lenovo fills that slot with a slug, but for some reason, I got a proper nano-SIM tray.

In my opinion, that Thunderbolt 4 port puts this machine over the top when compared to Microsoft's Surface Pro series. You can connect an external GPU to it and turn this lightweight tablet into a full-on gaming rig. It's pretty amazing. 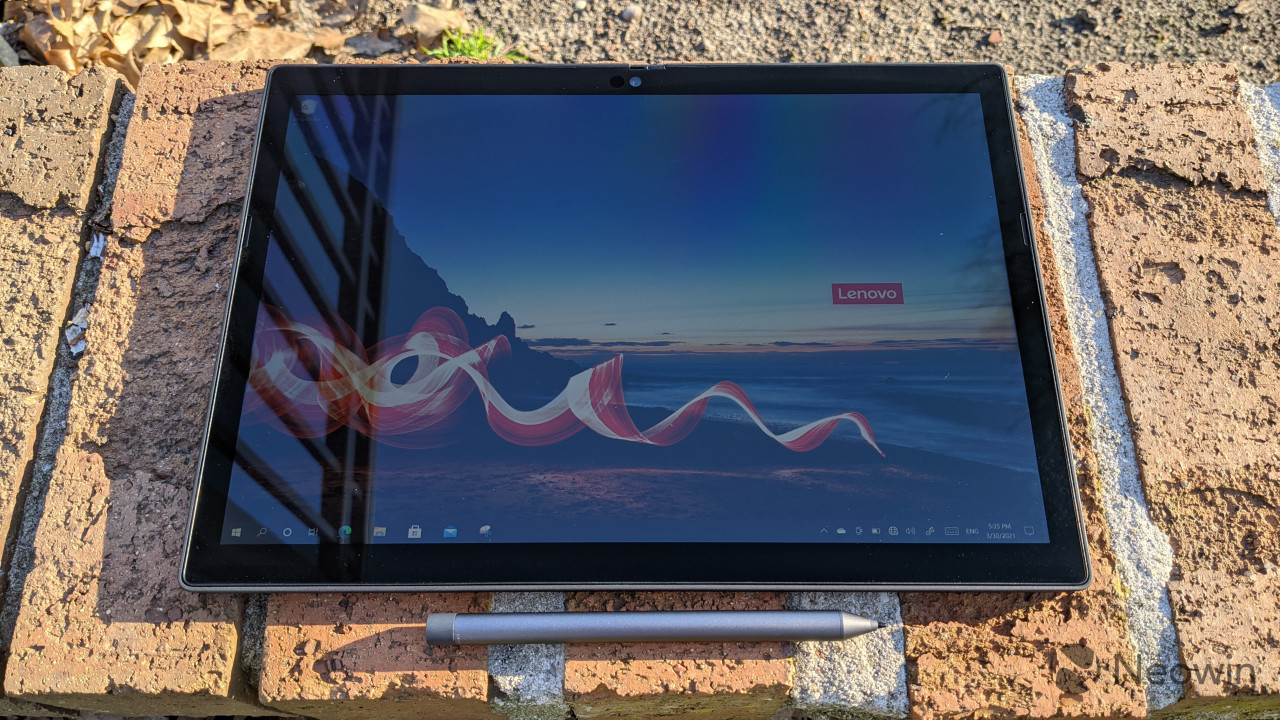 It comes in at 12.3 inches, the same as a Surface Pro 7, and of course, it has a 3:2 aspect ratio. The resolution is 1920x1280, or FHD+, and given the size, there's no visible pixelation, and I also didn't notice any light-bleeding, a problem I've had in tablets before. It also appears to have a full 178-degree viewing angle, meaning that you can look at it from any side without any visible distortion. 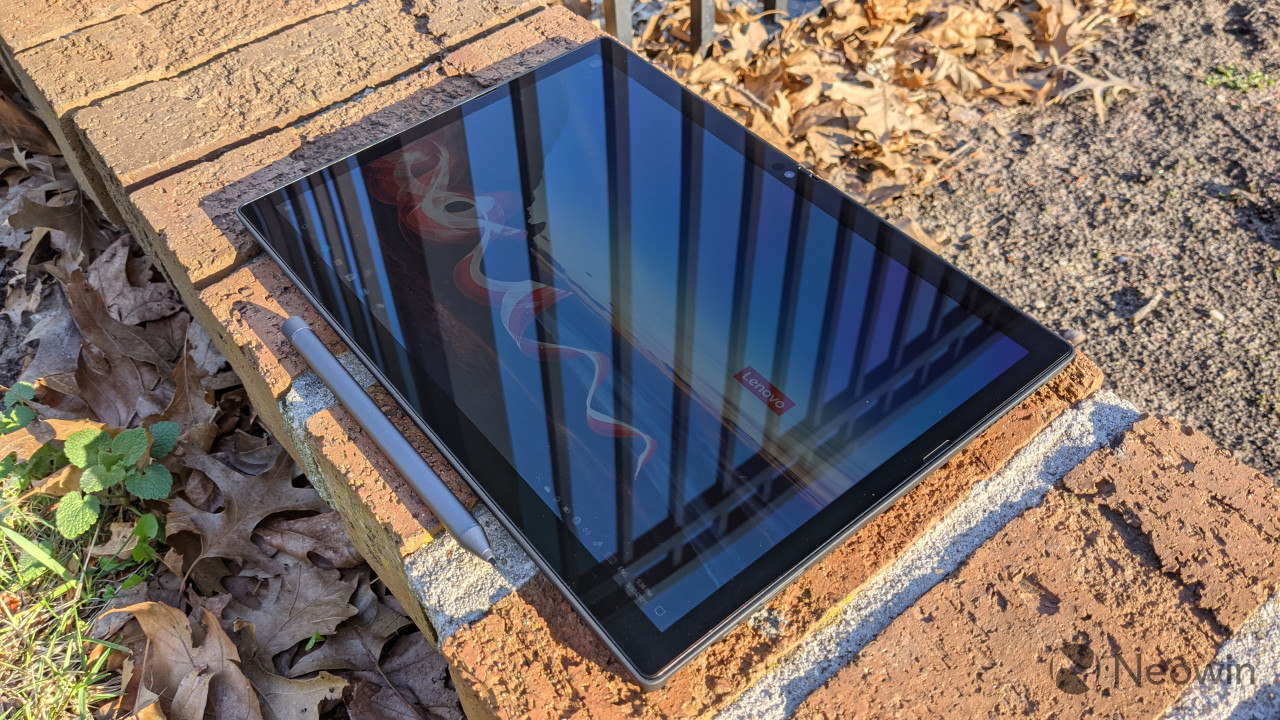 Brightness is pretty solid at 400 nits. Given that Lenovo didn't go all-out premium with this thing, I'm glad it didn't settle on one of those 250-300-nit panels that we've seen in a bunch of other PCs. For indoor use, I've settled on around 33% brightness. 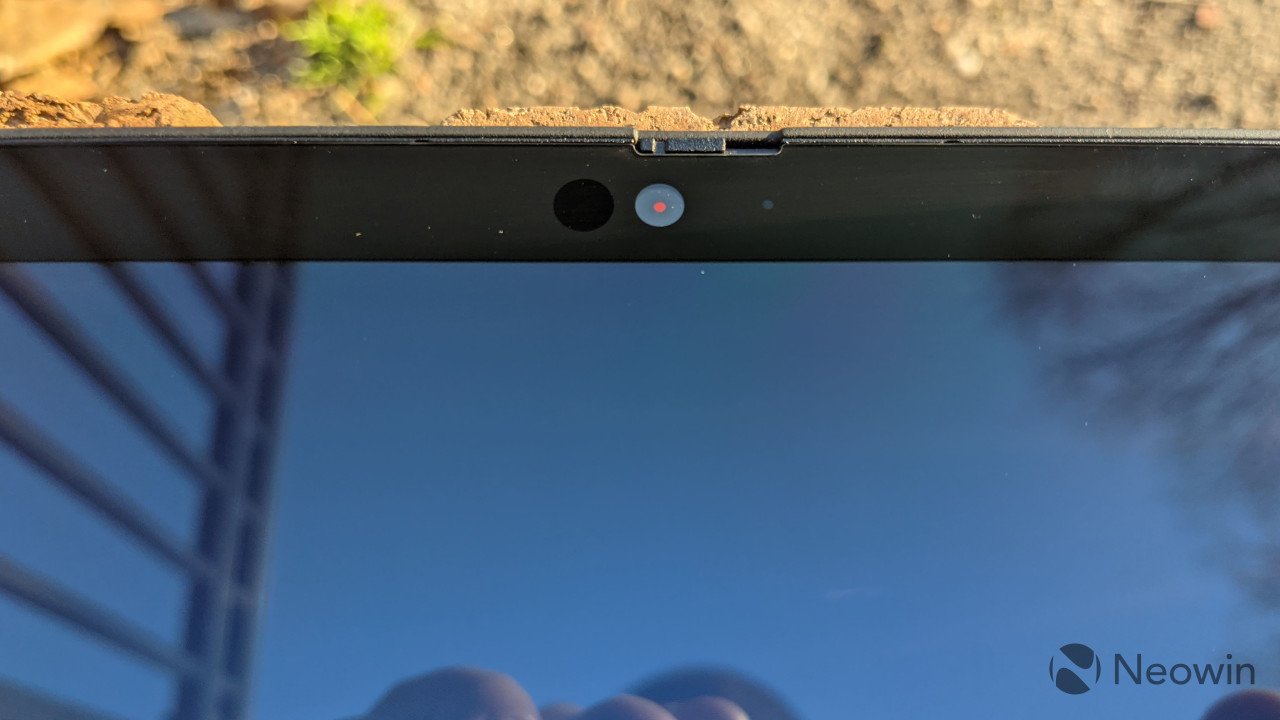 The bezels are fairly big, which is no surprise given just how similar this whole thing is to a Surface Pro 7, although the side bezels are a bit smaller. In the top bezel, there's an IR camera for Windows Hello, and there's a 5MP webcam with a privacy guard. The webcam can record video up to 1440p at 30fps, which is awesome when considering that so many laptops max out at 720p on sensors smaller than 2MP. In the age of working from home and video calls, it's great to see companies starting to use decent webcams.

The audio quality, on the other hand, is terrible. I haven't been able to come up with any redeeming qualities for the two 1W speakers on this machine, which are apparently tuned with Dolby Audio. They're not loud at max volume and the sound is tinny. This is a great tablet overall, but if you need audio quality, I'd invest in some Bluetooth speakers or earbuds.

If you're a fan of Lenovo's renowned ThinkPad keyboards but you want a tablet, you're in luck. The attachable keyboard is exactly what you'd expect, even if the keys are a bit shallower. In fact, the shallower keys aren't unique to this keyboard; they're showing up in the ThinkPad X1 Nano and ThinkPad X1 Titanium Yoga as well. 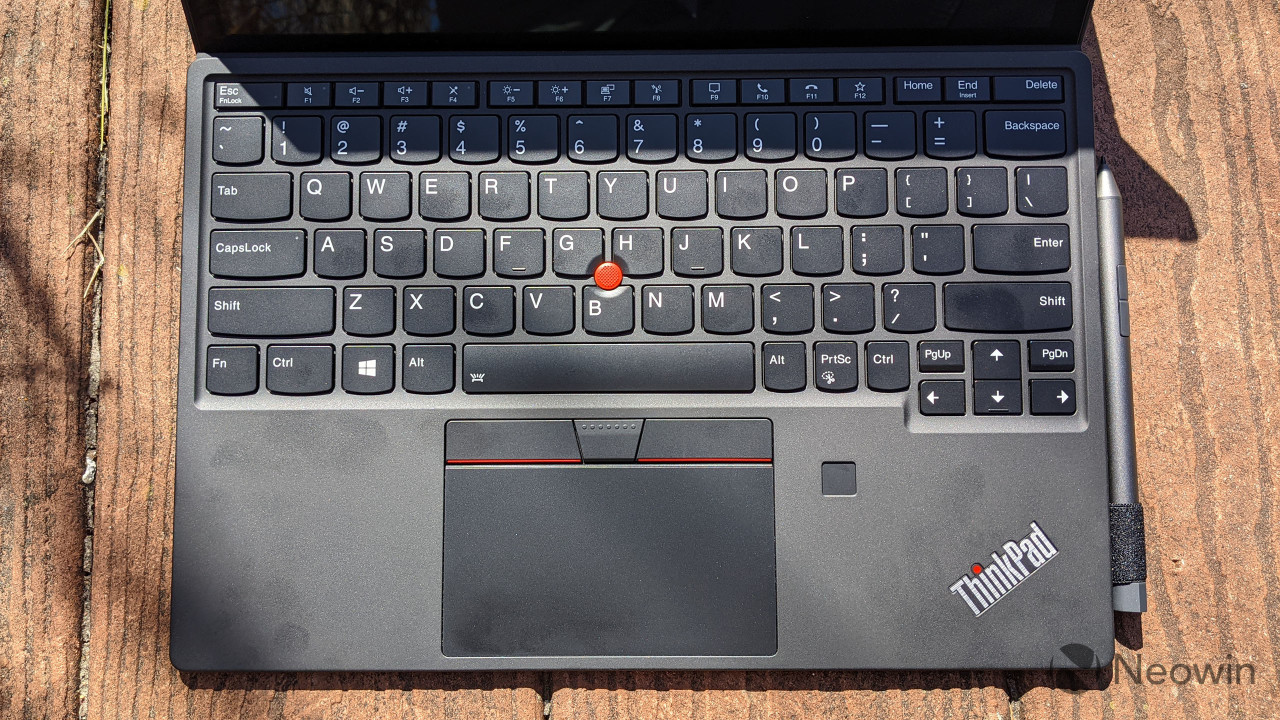 I quite like the shallower keys because it feels a bit more modern. I've always been a big fan of ThinkPad keyboards in general, but the more I use the deeper 1.5mm keys that are on most of the clamshells, the stranger it feels since I'm using shallower keys on other laptops. And of course, they're comfortable and accurate like you'd expect from a ThinkPad keyboard. 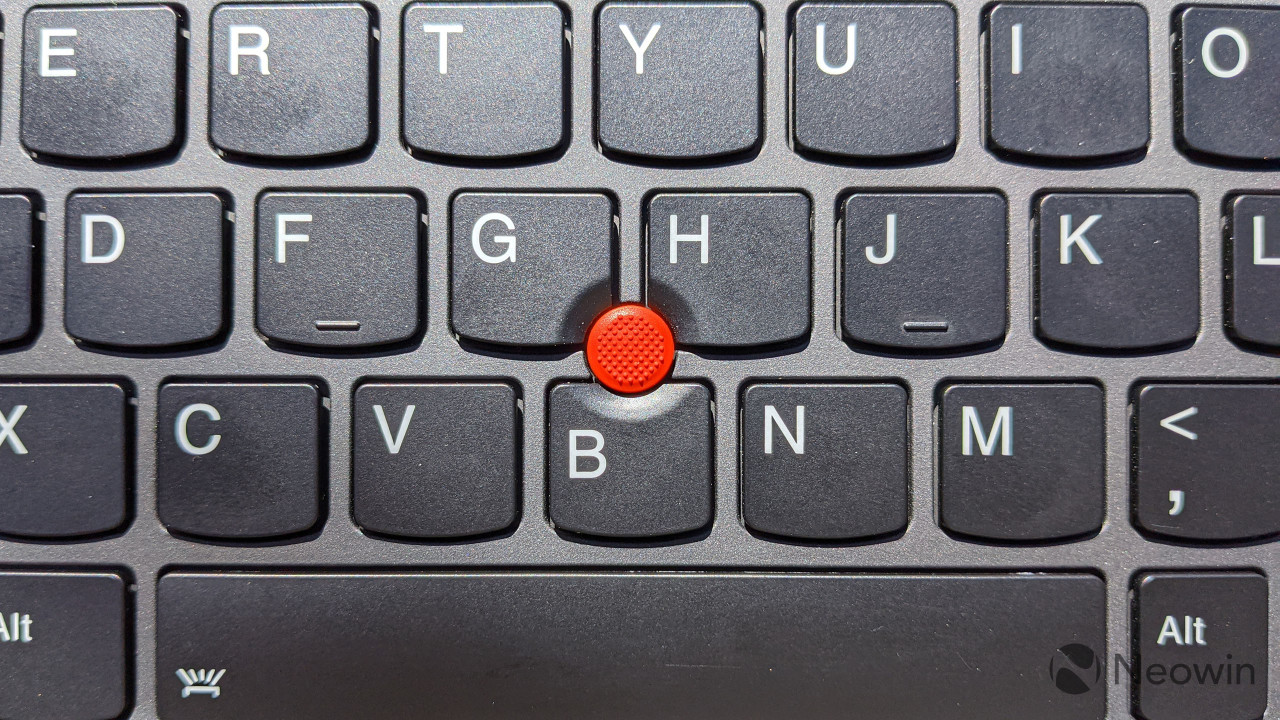 And just like you'd expect, there's a TrackPoint in the middle, so if you're a fan of it, it's there. If you're not, you can ignore it. It's a relic from the age when Windows laptops had terrible touchpads. 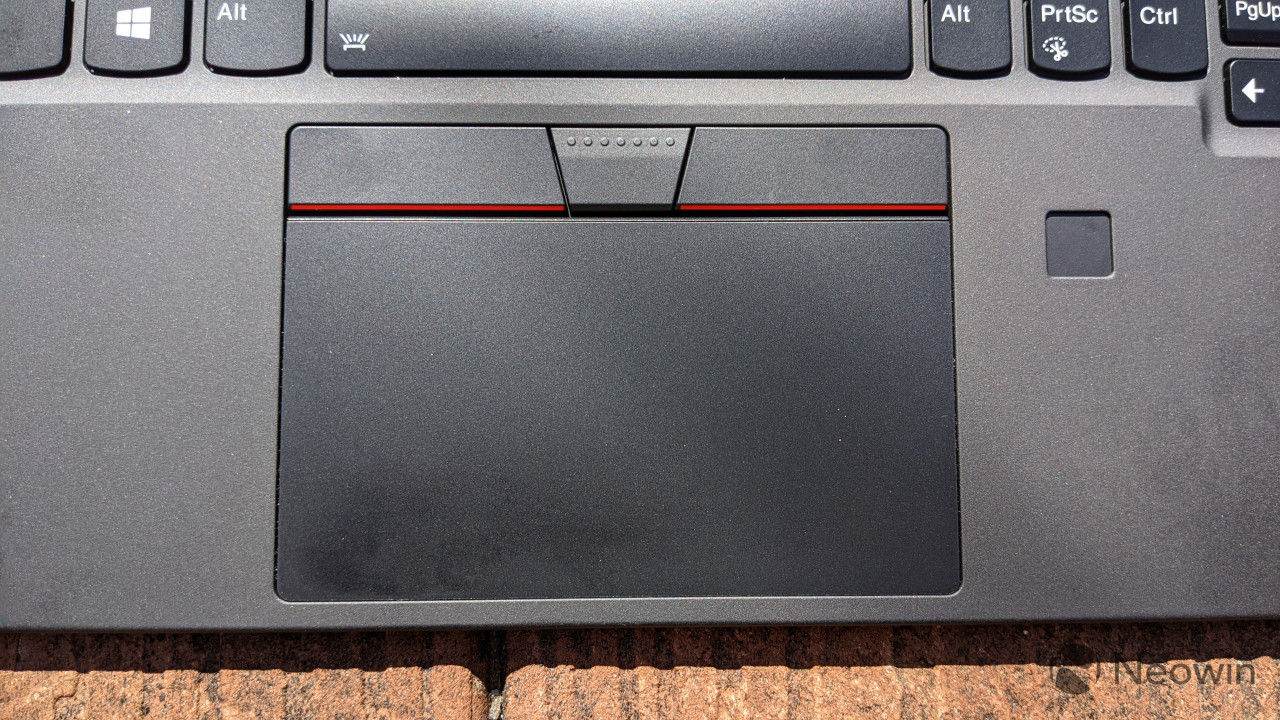 That age is no longer with us though because we have Microsoft Precision touchpads. As you'd expect, this one has physical buttons above the clickable touchpad, and those are mainly for use with the TrackPoint, although I like to use the buttons with the touchpad itself. 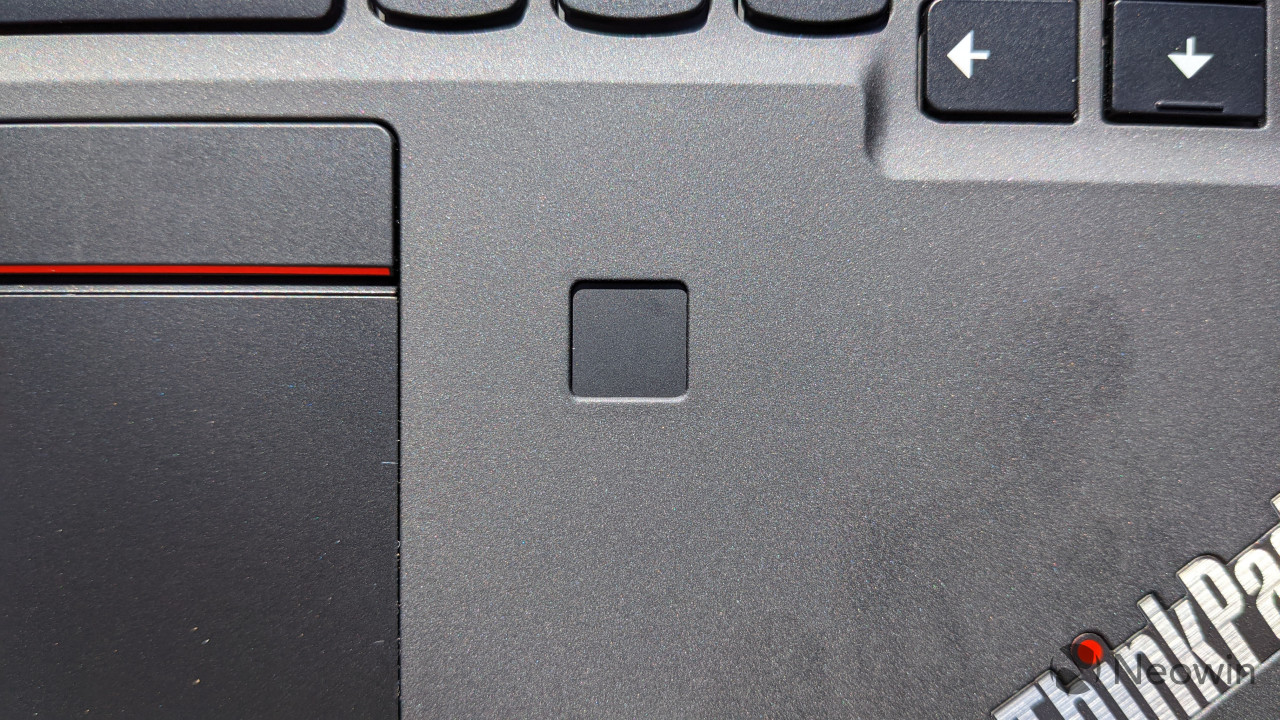 Finally, you might have noticed that there's a pen loop attached to the keyboard. I'm not a fan of it. I feel like the pen gets in the way while you're carrying the device, and if you choose not to carry the pen at all, then you're running out of reasons to use a tablet. I like Lenovo's ThinkPad Yoga convertibles that have the pen garage, and perhaps a better idea would be something similar to what Microsoft does with the Surface Pro X, where there's a pen garage in the keyboard.

The ThinkPad X12 Detachable that Lenovo sent me includes an Intel Core i7-1130G7, 16GB RAM, and a 512GB SSD. To me, that makes it a pretty good deal for under $1,400, especially since this has other premium features like Thunderbolt 4, and of course the tablet form factor.

Let's talk about the chip though. It's part of the UP4 category of Tiger Lake processors, announced back in September. With a TDP between 7W and 15W, it's the spiritual successor to what was previously called Y-series, and before that, Core M. Throughout the years, Y-series and Core M have gotten a bad reputation, and for good reason. They were terrible. Designed for thin and light, fan-less PCs, they were severely underpowered. 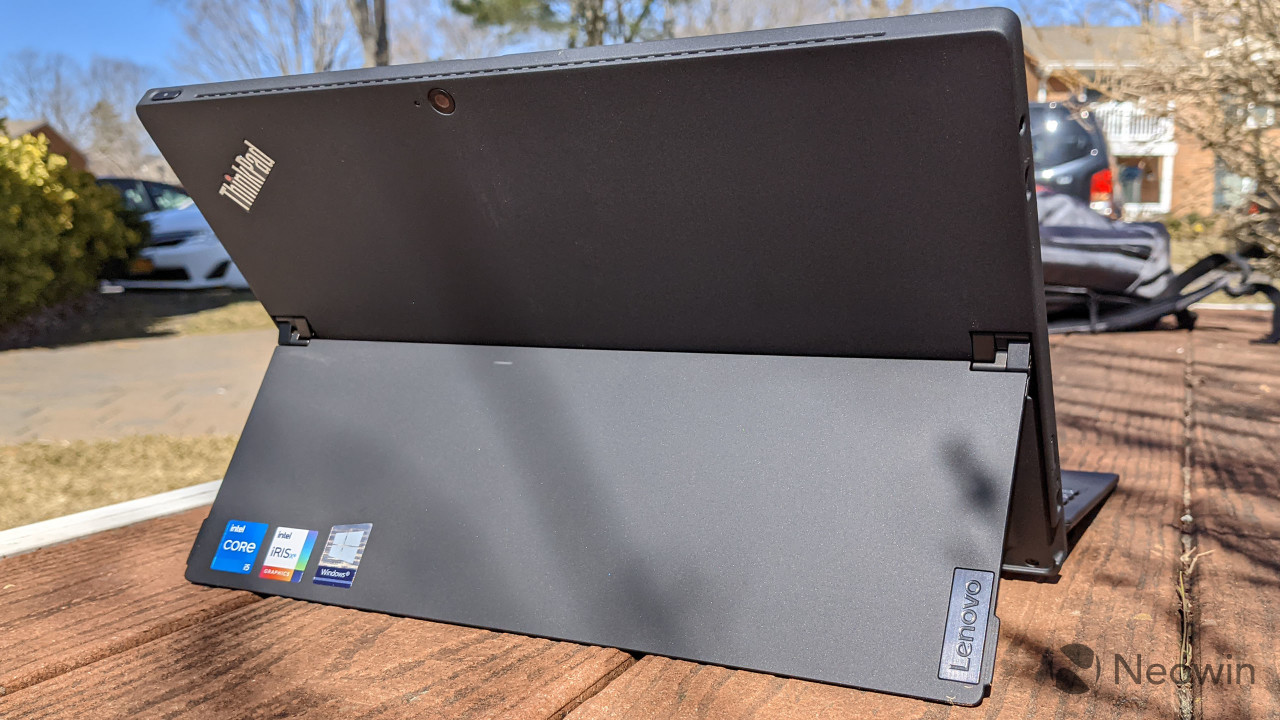 Not anymore. The last Y-series laptops I reviewed were the HP Spectre Folio and Acer Swift 7, which used eighth-generation 'Amber Lake' processors. They were dual-core with 5W TDPs. For 10th-gen, Y-series was split between Comet Lake and the new 10nm Ice Lake just like the Y-series, with the latter offering Iris Plus Graphics to give it an extra boost. The chips also went quad-core with a small boost in TDP. The only problem is that to my knowledge, Ice Lake Y never shipped in Windows PCs.

That brings us to Tiger Lake. We're getting all that was promised with Ice Lake and more with the jacked-up Iris Xe graphics. The Core i5 that's in this unit has Iris Xe graphics with 80 execution units, while the Core i7 would have 96 EUs. Gone are the days of lagging. This machine is snappy, and if I didn't tell you that it was a Core i5-1130G7, you'd probably just assume that it was a regular old Core i5-1135G7.

The only three PCs I've gotten my hands on with these new processors are the ThinkPad X1 Nano, ThinkPad X1 Titanium Yoga, and ThinkPad X12 Detachable. If you wanted to make one of these machines two years ago, it would have terrible performance. That's probably even true one year ago. I assume we'll see more of this over the next year from a variety of OEMs, and I'm excited about it.

The battery is a bit smaller than the one I got on the ThinkPad X1 Nano, and it shows in battery life. I only got about six hours of regular use out of this, which isn't terrible, but it's also not as good as what I got with the Nano.

As you can see, Intel has made some big improvements in its processors. It's pretty awesome.

If you're in the market for a Windows 10 tablet with an attachable keyboard, you don't have a lot of options these days. You're probably looking at this and Microsoft's Surface Pro 7, or the Surface Pro 7+ if it's for a business. The hardware is all pretty similar, with similarly-sized bezels, the same sized screens, and so on.

Also, if you're a consumer comparing it to the Pro 7, it's worth noting that Microsoft hasn't upgraded to the newest processors yet. 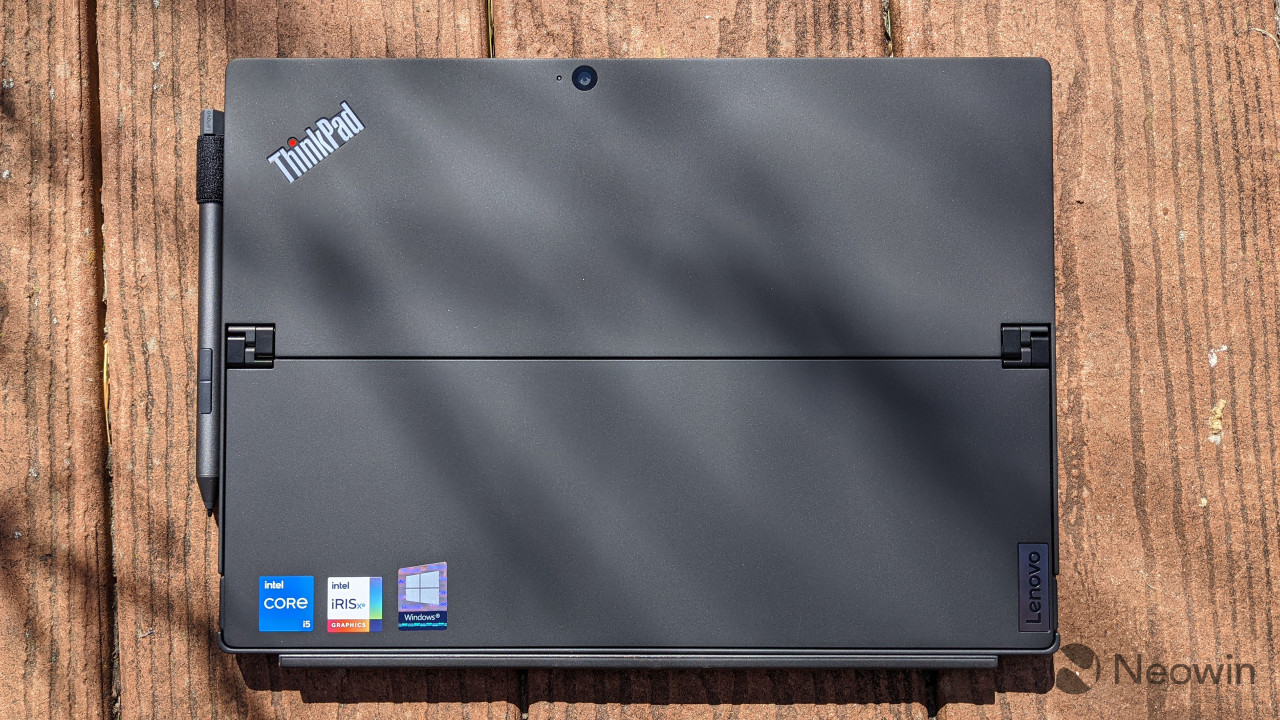 But the ThinkPad X12 Detachable has something that Microsoft has stayed away from: Thunderbolt. This thin and light little tablet can be expanded to be a full-blown gaming PC with an external GPU. It's pretty wild, and on its own, the Iris Xe graphics are pretty great.

My biggest cons are that there's only one Thunderbolt 4 port, that I'd prefer a method of pen storage that doesn't get in my way, and that the audio quality is just terrible. None of those are particularly major, as this is an awesome PC.

You get a premium ThinkPad keyboard, great performance, and a lot of value for the price. And most importantly, it's a proper alternative to the Surface Pro, which is kind of rare. 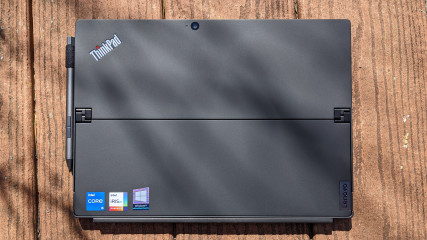 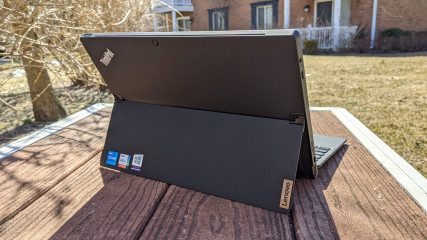 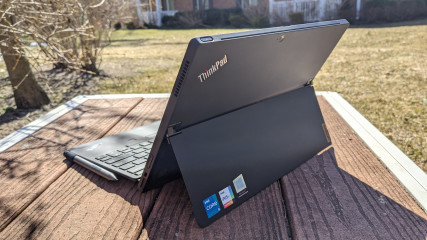 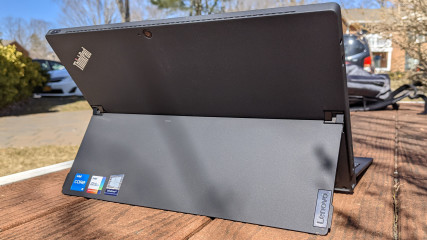 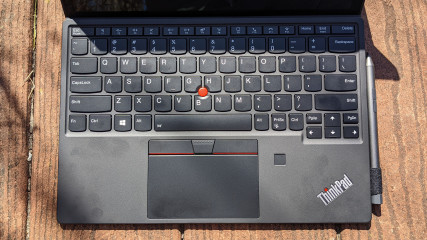 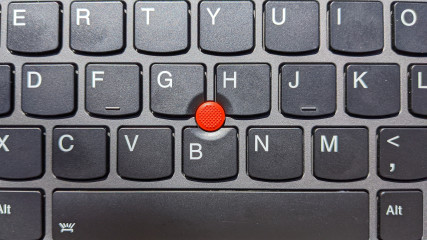 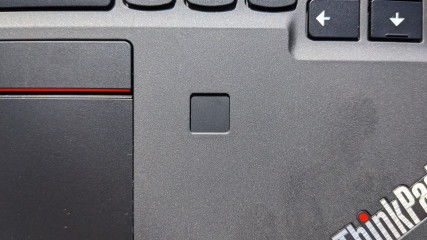 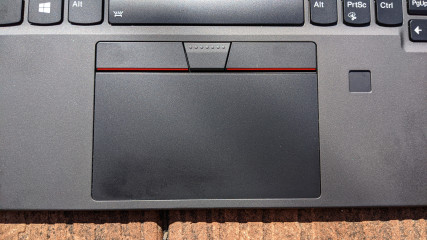 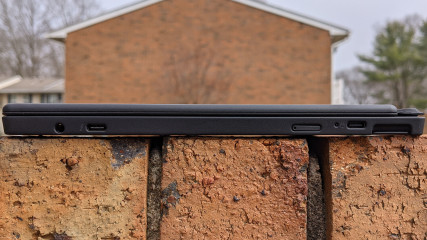 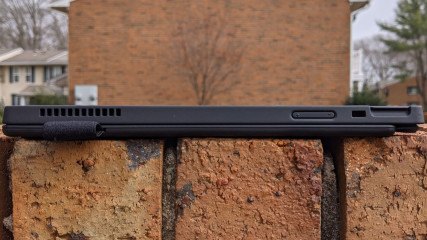 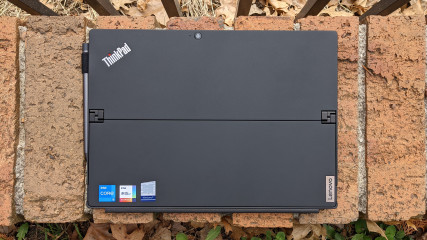 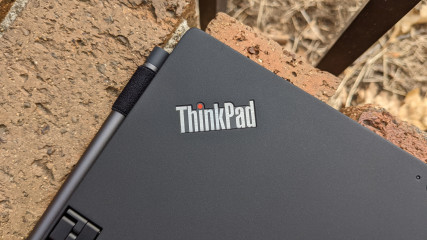 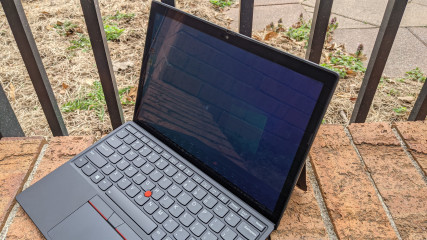 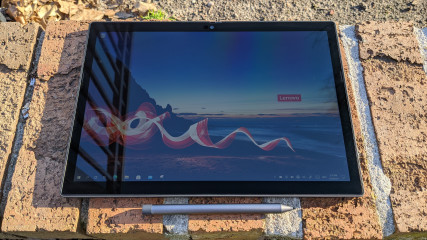 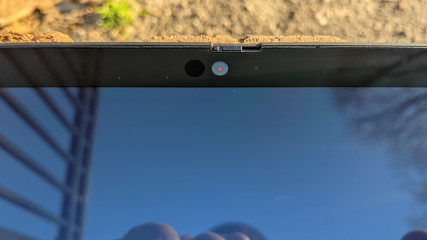 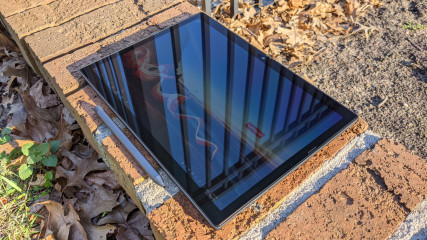