At the end of last month, LG unveiled an absolutely beastly new 4K TV - 105-inches in size, curved and featuring Ultra HD resolution, the massive display comes with an equally monstrous price tag of $117,000. Perhaps the only thing more astonishing is that the LG is practically a bargain compared with Samsung's similarly spec'ed device, which costs a staggering $129,000.

Let's be realistic though - most potential buyers can't come close to affording prices like that. But perhaps more will be able to splash out on LG's latest (albeit much smaller) curved display. 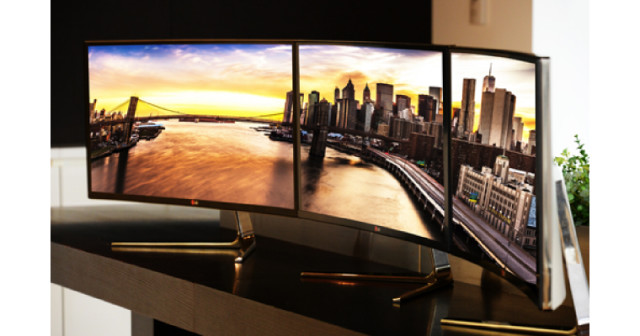 Thunderbolt 2 connectivity makes it easy to 'daisy chain' monitors together

The 34-inch LG IPS 21:9 Curved UltraWide Monitor was unveiled by the company today, ahead of its full début at IFA 2014 in Germany next month. Designed to work with both PCs and Macs, the LG 34UC97 offers Quad HD (3440x1440px) resolution, along with Thunderbolt 2 connectivity, which allows displays to be easily 'daisy chained' together.

7W stereo speakers are integrated into its curved body; LG says that "by adding a gentle curve to a 21:9 aspect ratio monitor, [it] has created a unique product that delivers a more immersive experience." Exactly how much that product will cost remains unclear for now, although we expect to hear more about that at IFA.

LG also announced its new Digital Cinema 4K Monitor, a 31-inch flat IPS LCD designed for broadcast production, design and photography, which will be unveiled at IFA alongside the 24GM77 Gaming Monitor, which includes a refresh rate of 144Hz, and special software that helps to reduce motion blur.