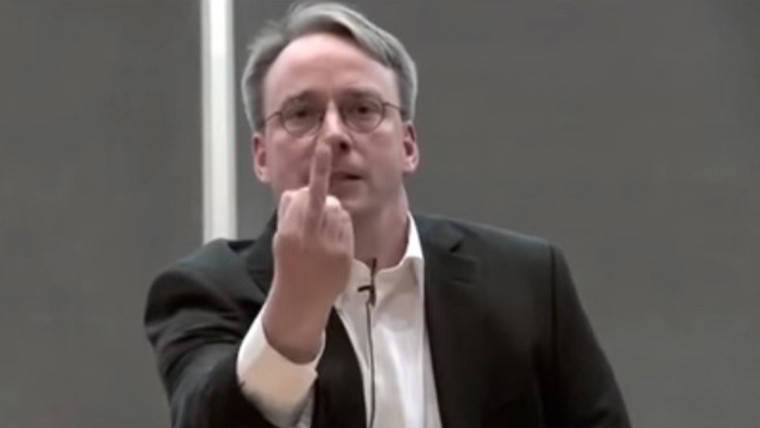 The tech community is having a meltdown of sorts over the revealed vulnerabilities in most processor chip architectures, leaving them open to creative hacks that could access valuable security information of users. Intel has been taking the brunt of the heat because its chips are vulnerable to all three variants because of design choices. Linux OS creator Linus Torvalds had some choice words for the company.

"I think somebody inside of Intel needs to really take a long hard look at their CPU's, and actually admit that they have issues instead of writing PR blurbs that say that everything works as designed," Torvalds said in a tersely worded note sent to a Linux list earlier this week. ".. and that really means that all these mitigation patches should be written with 'not all CPU's are crap' in mind."

Torvalds has the luxury of being outspoken about the problems. Many of Intel's partners have been quietly working on fixes, and while they have made it clear that the flaws are found in Intel chips, they also mention that the Spectre variant is found in AMD chips and the ARM architecture. Criticism, if any, has been mild from most of the tech sector, but an unchained Torvalds did not hold back in the rest of his rant:

Or is Intel basically saying "we are committed to selling you shit forever and ever, and never fixing anything"?

Because if that's the case, maybe we should start looking towards the ARM64 people more.

- Intel never intends to fix anything

- these workarounds should have a way to disable them.

Which of the two is it?

Usually, when Torvalds talks, people listen. And he is especially agitated when things affect the open-source OS he created back in 1991. Some users prefer Linux over Windows, but Linux is almost a staple on back-end cloud servers.

While Intel has been working with vendors and tech companies to fix the problems - and has already rolled out some firmware fixes through its partners - nothing will totally protect chips from Spectre, just make the vulnerability harder to exploit. The key is that Meltdown has only been found to target Intel chips, and the ARM Cortex A75. AMD has reported that the architecture of its chips make it immune from Meltdown and hard for Spectre to exploit.

Microsoft and Google have already issued mitigation updates for their software and devices, and ARM has advised developers what to do, specifically detailing Linux fixes. Apple expects to issue fixes for its various operating systems in the very near future.

Intel is already facing a securities investigation on behalf of investors, and numerous lawsuits have also been filed. While Torvalds' criticism may by biting, Intel has plenty of other more pressing concerns.