If you've already purchased one of Microsoft's new Windows 10 Mobile flagships, the Lumia 950 or 950 XL, you might want to check the Lumia Offers app on your handset. 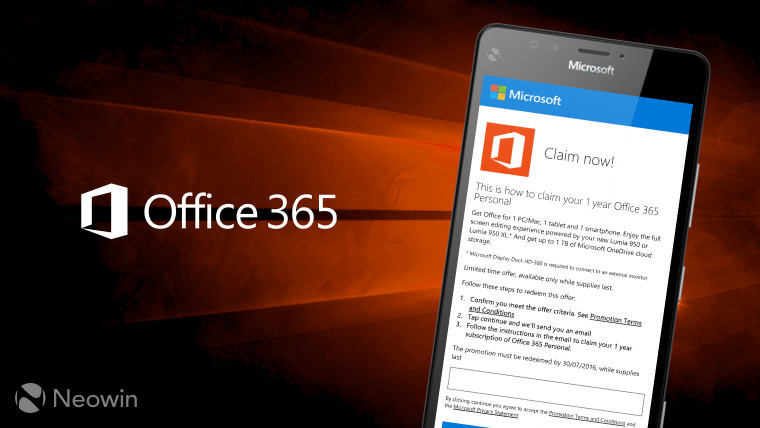 It's not yet clear if this offer extends to every market in which the Lumia 950 and 950 XL are currently available, but we've verified that it is available in various countries including the United States, the United Kingdom, France and Germany, and not limited solely to Microsoft's home market.

Update: Microsoft has now officially announced details of the offer, and confirmed that it is available only in these eight markets:

The terms of the offer vary slightly between countries, as you would expect. In the UK, they state that the offer applies only to purchases made "between 14 January 2016 and 30 June 2016", but we were able to claim a code with no issues on a device that was purchased in December. In the US, the terms and conditions state that the offer extends to handsets purchased "between November 20, 2016 and June 30, 2016".

To claim the offer, open the Lumia Offers app on your device, select the Office 365 offer, and after agreeing to the terms and conditions, tap 'Continue'. After that, you'll receive an email "within 5 days" containing your one-time-use promotional code for your free subscription, which can be redeemed via the Microsoft Store site.

The free subscription will certainly come in handy for owners of the devices planning to take advantage of Windows 10 Mobile's Continuum feature, which allows users to connect a mouse and keyboard to their handset, and then connect the phone to a larger display, effectively turning the device into a mini-PC, complete with desktop-style interface and Start menu.

As Neowin was first to report last month, editing Office documents on your phone in Continuum mode will require an Office 365 subscription from April 1, 2016.

Source: @JohanvanMierlo
​This article was updated to add details of Microsoft's official announcement regarding the offer, which came shortly after the article was published.