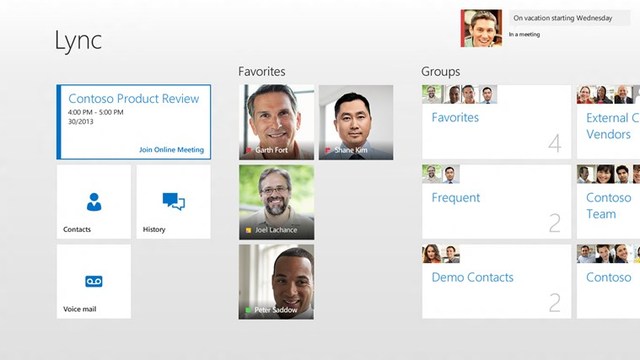 In October, Microsoft launched the Windows 8 and RT version of its enterprise-based communications software Lync. It's one of two software products from the Microsoft Office team that has an app made for the Modern Windows 8 user interface (the other being OneNote).

This week, Microsoft released a new version of its Lync Windows 8/RT app that offers up a few new features. One of them is a new set of buttons designed to give faster access to the Back, Search, Mute, and End Call functions. The new Lync app also adds some enhanced ink capabilities when used in IM text chats.

Finally, the release notes for the Lync app indicate that the new version adds more language support along with some unnamed performance improvements and bug fixes.

Microsoft held its first ever Lync conference in San Diego earlier this week, where the company revealed some future plans for the Lync family. Perhaps the biggest announcement was that Lync 2013 will feature integrated support for Microsoft's VoIP service Skype sometime before the end of June. Presumably the Windows 8 and RT versions of Lync will be updated around that time to add the Skype features.