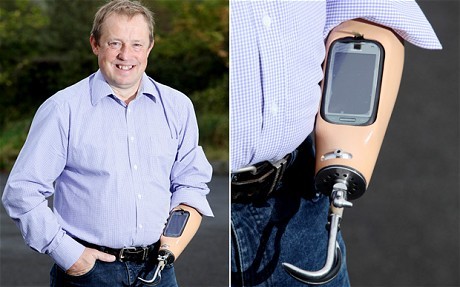 In the "why hasn't someone done this already" department, The UK-based Telegraph web site reports that a British man who works with a prosthetic left arm has come up with a novel way to have that arm work with his smartphone. 50 year old Trevor Prideaux asked for and received a smartphone dock that is built into one of his limbs.

The smartphone itself is a Nokia C7 and the company helped Prideaux and his medical team to create the limb so that it could contain a fibercast cradle. That cradle is designed to allow the Nokia C7 to easily fit inside. Prideaux, who was born without his left forearm, says, "The phone slots smoothly and securely within my limb and is easily removable, when required. I think this would help a lot of people with prosthetic arms - especially those who were not born with the disability."

As more and more smartphones are sold around the world, they are going to be used by people who have to work with prosthetics, either as a result of being born without limbs or people who lose them in accidents.

In fact we could see a future where people with such artificial limbs have smartphone-like devices built right into the prosthetic. We can imagine a touch screen and the hardware being included in such limbs, which would allow the user easy access without the need for a separate device.