First, let me set some expectations. While I enjoy most of the Marvel movies and have had a lot of fun playing the various Marvel-themed pinball tables, I'm not an expert when it comes to the characters. Sure, I know a lot about the characters from the Avengers and I know quite a bit about the main X-Men characters from watching 90s cartoons, but when you get to the lesser known ones, I shrug my shoulders.

When I saw that Zen Studios was releasing a Women of Power two-pack, I assumed we'd see strong female characters like Storm, Jean Grey, Scarlet Witch, She-Hulk, Black Widow, Rogue, and Captain Marvel. Well, at least I was right on one of those: Black Widow is a main character. The rest? Not so much. On the surface, this was disappointing, but after playing the two new tables, I'm glad they went with some newer characters, even if the title may be a little misleading. So what characters made it into the game? Let's find out.

The new Women of Power pack consists of two individual tables: A-Force and Champions. In A-Force, Black Widow and Madam Masque are fighting over a Cosmic Cube and when it's destroyed, are sent into an alternate universe that is ruled by the Soviet Union. They have to team up to escape, and while I didn't complete the final mission, I did at least get to play it. The second table, Champions, stars Ms. Marvel (aka: Kamala), as she tries to defeat Bombshell after a store robbery, but aside from that the plot seems a bit weak. There's a number of supporting characters in this table, including Spider-Gwen, America Chavez, Sister Grimm, Hawkeye (not the one from Avengers), and my personal favorite, Squirrel Girl, although most of these don't have animations to go with them. Both tables have a completely different look and feel.

In the A-Force table, your goal is to help Black Widow and Madam Masque escape from an alternate reality in which the Soviets run the world. The introduction animation is very well done and the tone of the table itself feels very much in line with the Avengers tables we've reviewed in the past. 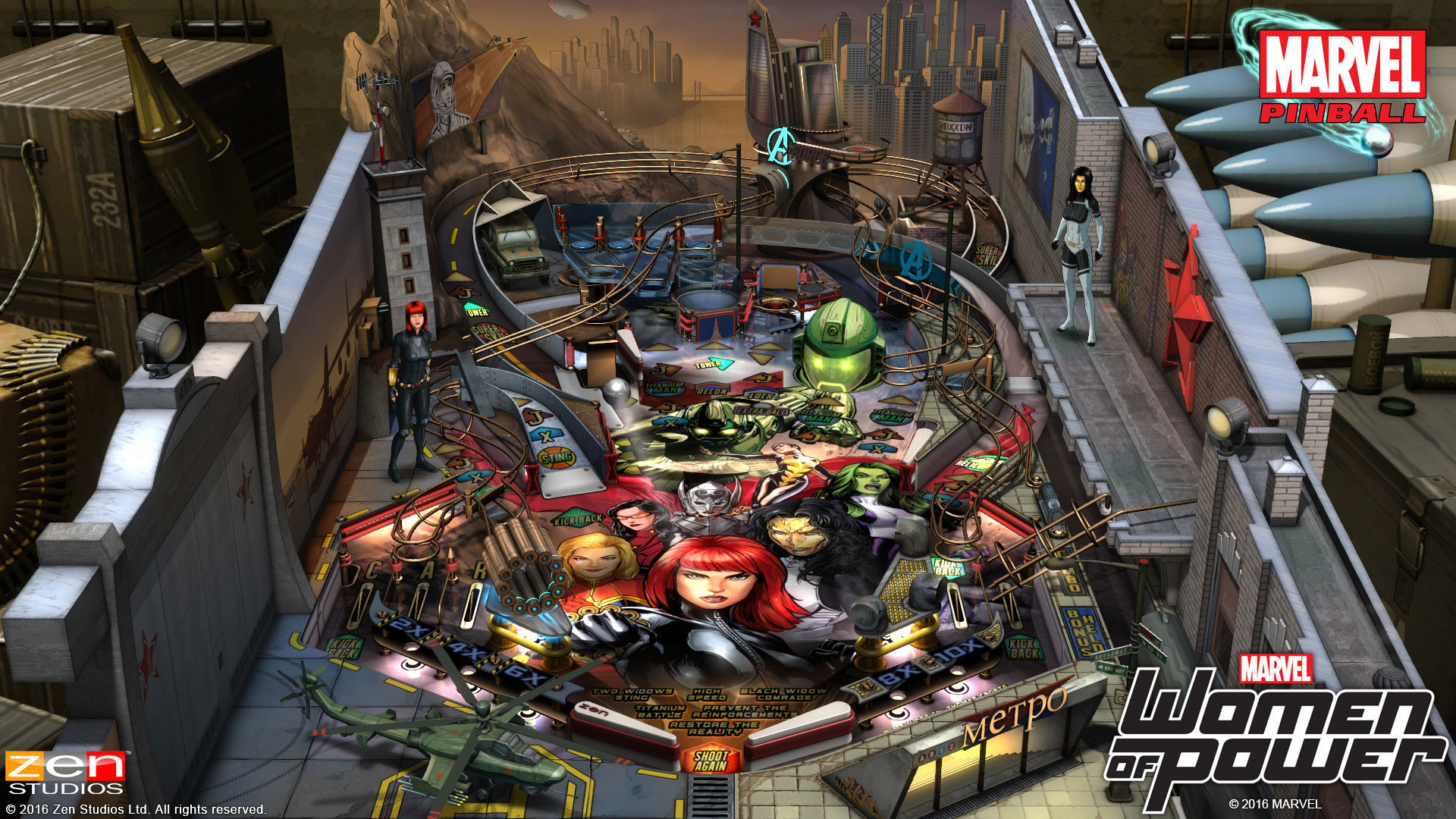 The first thing you'll notice with this table is that there are four flippers. I'm personally not a fan of tables with only two flippers, I really like tables with three flippers, and I love tables that have four. To me, it adds an extra level of skill having to focus on the entire table, especially during multiball scenarios.

This table does a good job of incorporating a unique ball launcher that doesn't feel out of place with the table, unlike some of the previous tables we've looked at. In this case, the launcher is a pistol and you're aiming to "break a street light" to make your skill shot. As with all launchers, the further you pull back, the more power the launch will have and you're met with the "bang" of a gun. Overall the mechanical works very well. 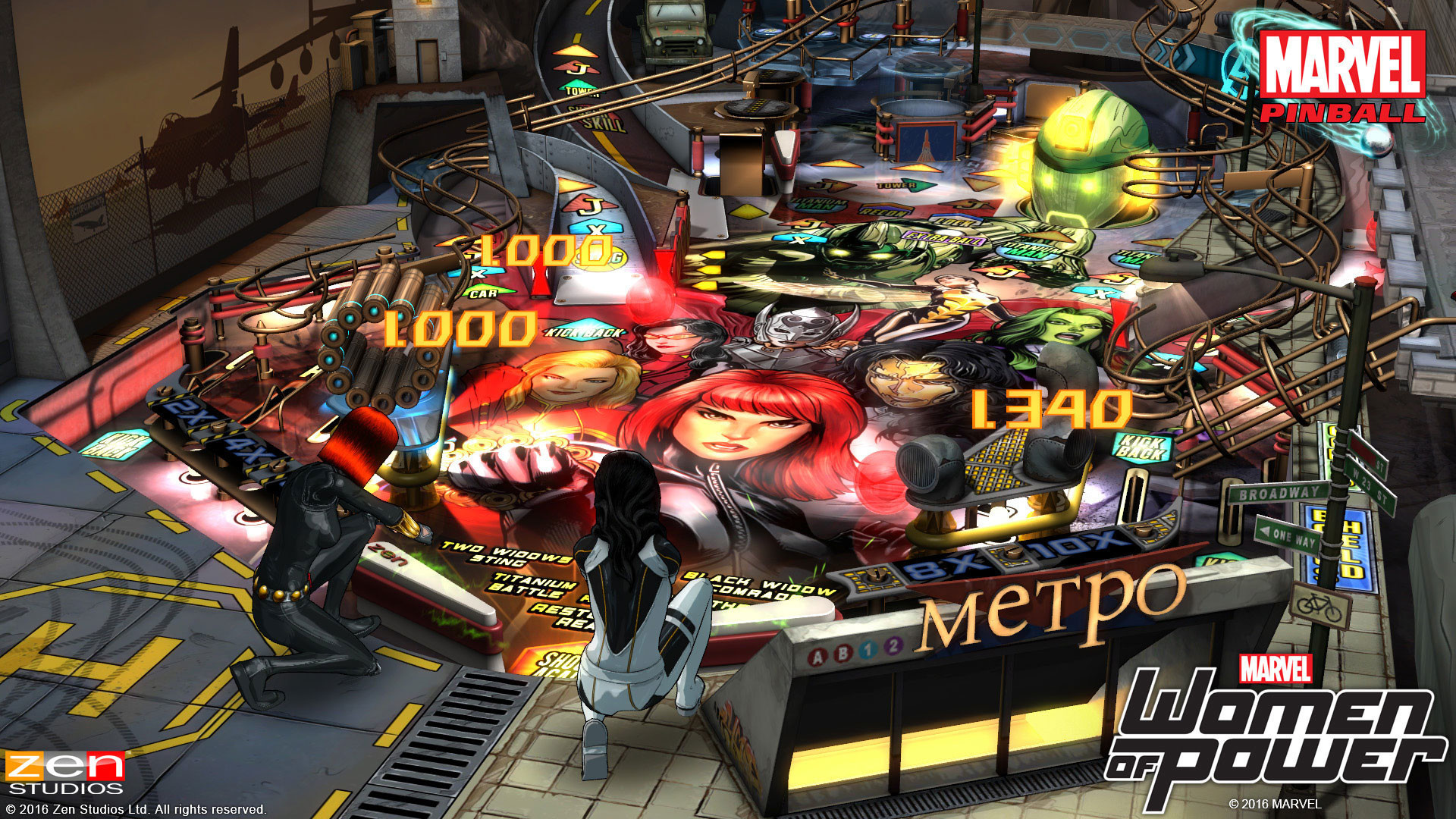 The table is a bit easier than others in that you don't need to actually complete a mission to mark it off; simply activating the mission is all you need to do. When you unlock all of the missions, you will then face the final battle. In my playtime, I actually made it to the final mission once, something I've never done on any of the other Zen Studio tables during my review period, which tells me the difficulty level of this table is relatively low.

There are two minor negatives on A-Team. The first is that some missions activate a helicopter that starts flying across the screen. Although the animation looks really good, the helicopter gets in the way, making it hard to tell what's going on while it's flying and then landing again in the lower-left hand corner of the screen. While not a big issue, it does somewhat detract from the experience. 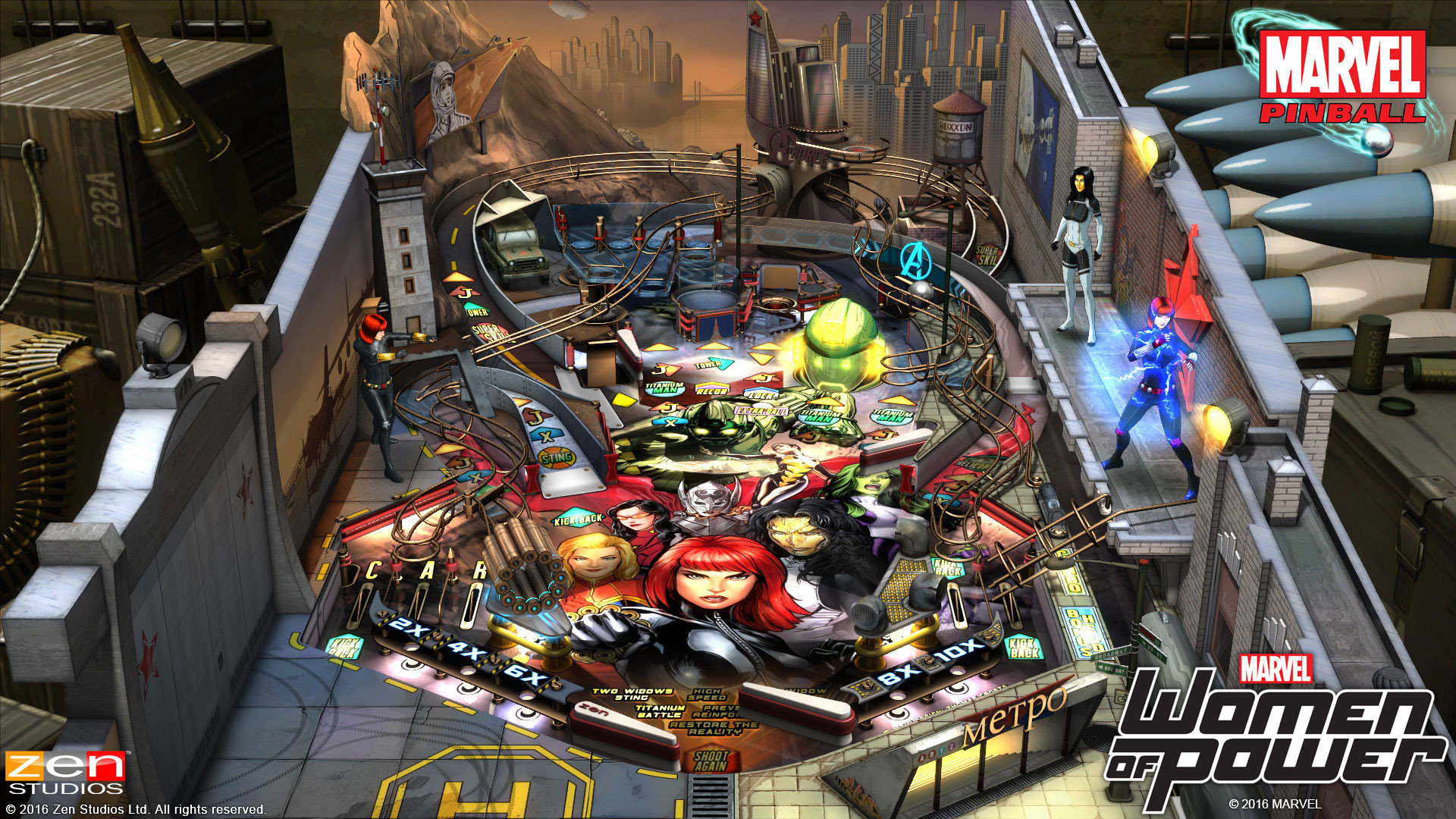 The second issue is that although the table shows many different female superheroes, they don't seem to factor into the gameplay very much. Shooting the ball into the target towards the top middle of the screen has you "search for other A-Team members," but they don't seem to actually add anything into the game, and I can't remember actually hearing any other voice actors.

The second table in the pack is entitled Champions, although I wasn't able to figure out why. Unlike the A-Force table, this one has more of a cartoon-like appearance, having more in common with the Bob's Burgers table than typical Marvel tables. At first I found this jarring and didn't like it, but after a couple of games, I realized why the difference was there: This table is much more light hearted than most Marvel tables, with the main characters being children. 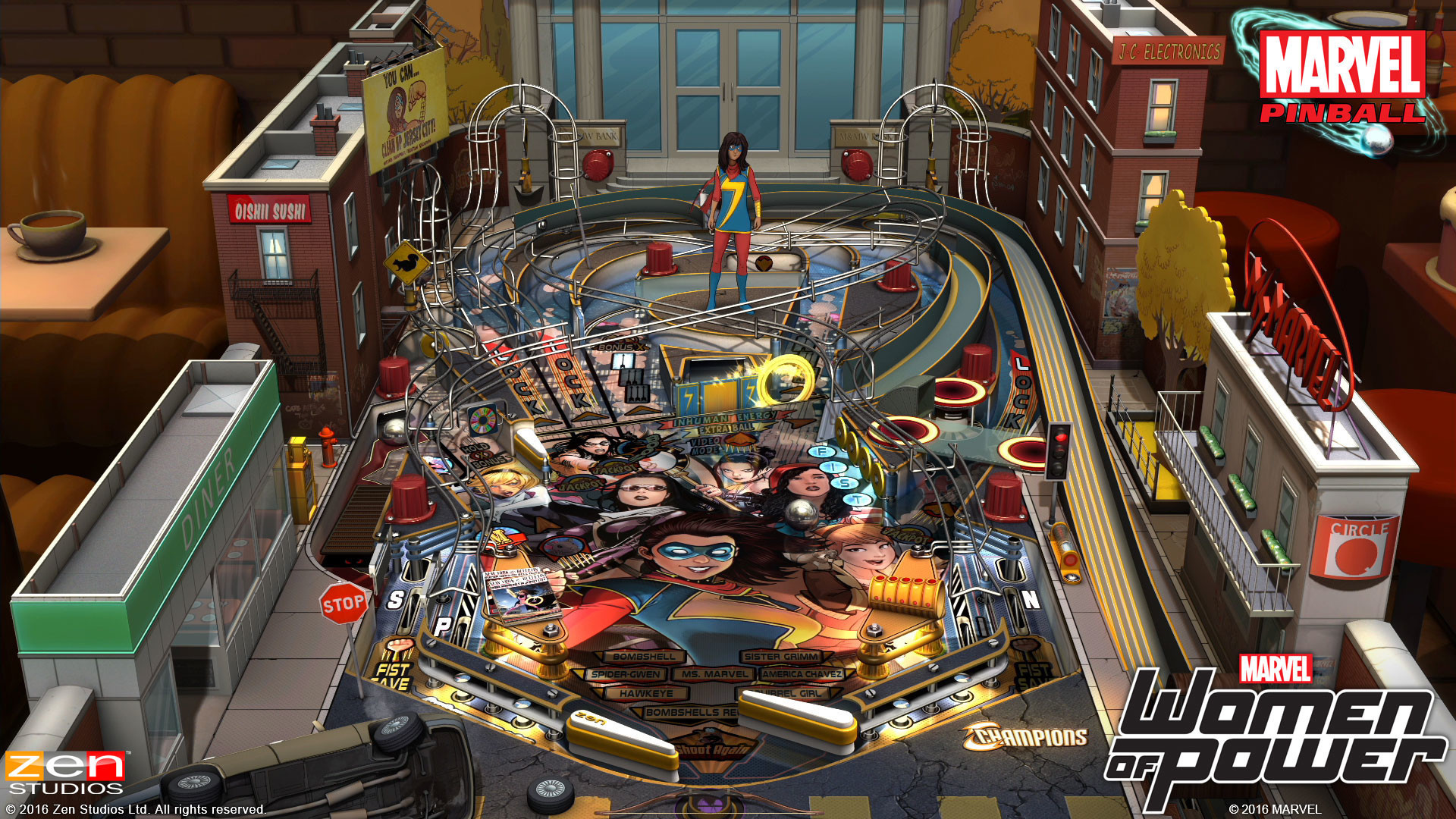 The main character, Ms. Marvel, is actually the 4th in a line of Ms. Marvel characters. While playing the table you'll hear voiceovers from many of her friends as you try to take down Bombshell. My favorite was that of Squirrel Girl, a high school girl who can (as her name suggests) talk to squirrels. While her part in the game is small, she has some memorable interactions with Ms. Marvel such as:

Squirrel Girl: My squirrel friends can't wait to help with this mission.

Ms. Marvel: Great. Where are they now?

Squirrel Girl: Oh, umm, I guess they're out looking for nuts.

The voiceovers in general add to the charm of the table, especially when you consider the characters are mainly children. For example, at one point Ms. Marvel exclaims, "Wait, I have super powers!" while another time, after making a good shot, she'll casually say, "That's a good bizzaro teleporting doggie," a shout out to the bulldog-like creature, Lockjaw. 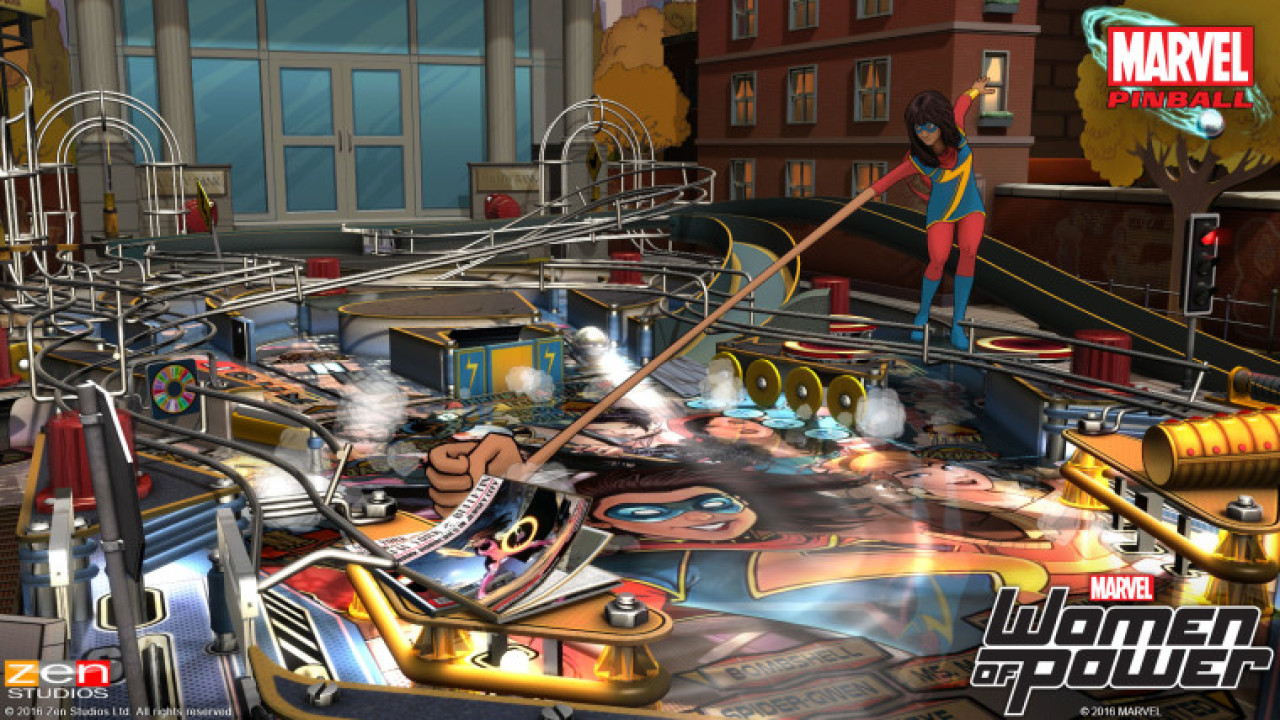 Activating the missions consists of hitting a golden circle three times in a row. The first two times the target stays still, but the third time requires you to hit it while it moves back and forth in the middle of the table. It's relatively straight forward, and with some practice I was able to hit them all very consistently. Doing this summons Bombshell, although it was sometimes confusing figuring out what to do after you summoned her. Sometimes she would throw a bomb on the table that you had to destroy, while other times there appeared to be no clues as to what to aim for.

Just like with A-Force, you don't have to actually complete the mission to get credit for it. This makes the table easier than many, although it seemed that while the scores were much higher than A-Force, the difficulty seemed higher, as I was never able to activate all of the missions. I'm not sure if it was due to not knowing where to aim or not, but it never really bothered me because it was a fun table to play due to the artwork and the voiceovers.

So the question, as always, is should you spend your hard earned money on this two-pack? At $6.99 for two tables, the price tag is a little higher than the usual price of $2.50/table when buying in bulk or even $2.99 for a standalone table. It's hardly expensive, but if you buy a lot of tables, the extra money can add up.

If you prefer difficult tables, you can probably skip this offering. The fact that you don't have to actually complete a mission to finish it means it's easier than most other tables that Zen Studios offers. On the other hand, if you find those tables too difficult, you might like the fact that you can unlock other modes easier than usual.

I also liked reading up about the history of some of the Marvel characters I've never heard of before, although I realize many people like to stick with the classics. My favorite character, by far, was Squirrel Girl who had some funny quotes in the game. While this doesn't necessarily impact the game play at all, it was still a fun diversion to learn more about the Marvel universe.

Overall I found that while these two tables aren't revolutionary, they're still overall both fun to play. In addition, the two different styles of artwork and overall tone add a nice variety to the gameplay, making Women of Power a strong offering from Zen Studios and an overall highly recommended purchase on the platform of your choice.