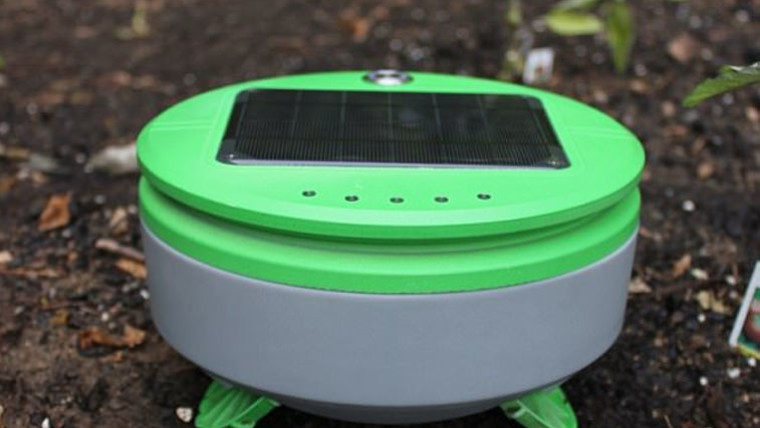 Franklin Robotics is developing a robot for gardening, the Tertill. One of the people behind it is Joe Jones, someone that brought us the Roomba, the house vacuuming robot.

The Tertill is similar to the Roomba in many ways, except that it drives around your garden; this time it is in search of weeds as opposed to just dust.

Joe Jones felt the need to develop the Tertill after having struggled in the endless war against weeds in his own gardening project. The Tertill is solar powered which means it can stay out in the garden patrolling for days, it appears to be able to navigate through dirt without much difficulty, and is waterproof.

The robot seems to be able to sense your bigger plants and flowers that you are nurturing and avoid killing them when it comes into contact with them. The developers say that if do you have small sapplings that the Tertill might try and eliminate; you can place a collar around them that the Tertill will then identify, avoid and move on.

They say that through a combination of sensors and algorithms the robot will also avoid obstacles and stay out of trouble. If you live somewhere very cloudy and it needs a charge, the robot also has a USB port and is Bluetooth capable. One of the key things they like to highlight about it is that it means your garden will stay pesticide free, as your weeds will assumedly be taken care of by Tertill.

So how does it kill? The robot kills the weed saplings when the bot drives to them, detects their size, and then chops them down with a mini weed whacker.

The project is currently in its Kick starter phase, however they have already released a price tag for the Tertill which is $300.

Just as Domino's Pizza is delivering with their Starship robots, and Amazon exposes more plans for drone delivery systems, the Tertill is another example of the ever expanding role that robots could play in our daily lives.

(Note: Franklin Robotics released images of the Tertill in both the green and white model)